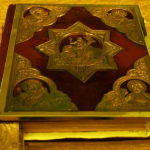 This Holy Gospel book was taken from SS. Peter and Paul Orthodox Church

The Rev. Volodymyr Zablotskyy had given up on getting back a stolen Holy Gospel book — treasured by the members of SS. Peter and Paul Orthodox Church — until a stranger handed it to a stunned parishioner over the weekend as he walked the Lovejoy neighborhood.

“To me, it was very emotional,” said Zablotskyy, who read from the book with portraits of saints embedded on its red velvet cover during the Sunday service at the Ideal Street church. “I can’t express how happy I am to have it back. It was the best news I have received in the last few weeks.”

He noticed the ornate Holy Gospel book was missing about two weeks ago.

Copper thieves are suspected in the theft, because two days before the book came up missing, $5,000 to $6,000 worth of metal was stolen from the roof.

The congregation offered a $1,000 reward for the book’s return, but the man who gave it to Steven Camp did not provide a name.

The man knew Camp was a parishioner and told him, “I need to do the right thing,” handed over the book and walked away.

It was at about 8 p.m. Saturday when Camp went to the rectory where Zablotskyy, the acting rector of the church, lives.

“He said, ‘Father, you couldn’t believe what happened,’ and he handed me the Gospel and began to tell the story,” said Zablotskyy.

The priest isn’t focused on finding the thief. Instead, he is delighted the holy book, with its connection to past congregations, is back where it belongs.

“The person who did turn the Gospel in evidently had some change of heart,” said Zablotskyy, a native of Ukraine. “I asked my congregation today to pray for him, because that might be the beginning of work that God needs to do in his heart.”

SS. Peter and Paul was founded by Russian and Austro-Hungarian immigrants in 1894. During the Great Depression, the congregation replaced its small wooden church with the current yellow brick church featuring a domed roof in terra cotta and copper.

The book — Gospels by Matthew, Mark, Luke and John — dates at least to the church’s 1933 opening, said Zablotskyy, who moved here from New Jersey in August.

In the Orthodox church, it is traditional to read from the Gospels for occasions such as weddings, baptisms and confessions. The words are in Old Church Slavonic — similar to Latin — and are old-fashioned, but speakers of Slavic languages such as Russian and Ukranian can understand them.

Zablotskyy read a passage this Sunday about the hand of Jesus healing a woman. A hand seemed to have touched the man who returned the book, he noted.

The congregation, which once numbered 700, has dwindled to about 30. New immigrants from Russia and Eastern Europe join those who have lived longer in the Buffalo area. Some grew up in the Orthodox tradition; some are new to it.

In a welcome turn, the public attention on the missing Gospels and copper seems to be helping the church that some in the neighborhood have told Zablotskyy they thought was closed.

People have been turning up — about 10 he’s never seen before at services. Others have been calling to offer financial and moral support.

“I learned my lesson not to give up hope,” he said. “I’m very optimistic about the future. … Generally, when the tragedy like that strikes, people tend bind together.”