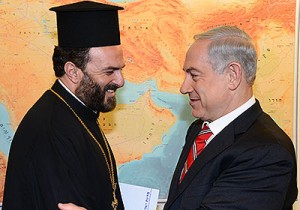 Father Gabriel Nadaf, a Greek Orthodox priest from Nazareth and spiritual leader of a forum for the enlistment of Christian youth in the IDF, meeting Prime Minister Benjamin Netanyahu. Photo: Prime Minister’s Office of Communication.

The Palestinian Christian Initiative, an anti-Israel Christian group in Israel, said it condemned an Israel Defense Force program aimed at recruiting Christian cadets. While Christians around the world praised the increased Christian enlistment in the Israeli Army, the group, known as Kairos Palestine, denounced the news.

A statement from the group was posted by Palestinian site International Middle East Center, and highlighted on Sunday by anonymousblogger Elder of Ziyon. “Those who call for recruiting Christians to the occupation army do not represent us, do not represent our Churches, and do not represent the Christians. It seems that some of those who have been deceived chose a wrong path that does not serve our interests and faith as Arab Christians,” Kairos Palestine said.

The statement also claimed that trying to recruit Christians to serve in the IDF is immoral, and harms the Palestinian Christian identity in the Holy Land.

Netanyahu announced that a joint government-community forum to be led by Father Gabriel Nadaf, a Greek Orthodox priest from Nazareth, will be established to promote the enlistment of Christian community youth in the IDF and national service and their integration into the life of the state.

The forum will work to integrate more members of the Christian community into the IDF, ease the necessary administrative and legal aspects of signing up, protect those who support enlistment and enlistees from violence and threats, and step up law enforcement against those who disturb the peace and incite to violence.

At a meeting with Netanyahu, Father Nadaf said: “Our goal is to guard the Holy Land and the State of Israel. We have broken the barrier of fear – the state deserves that we do our part in defending it. Those who oppose the integration of the Christian community in the institutions of state do not walk in the path of Christianity.”