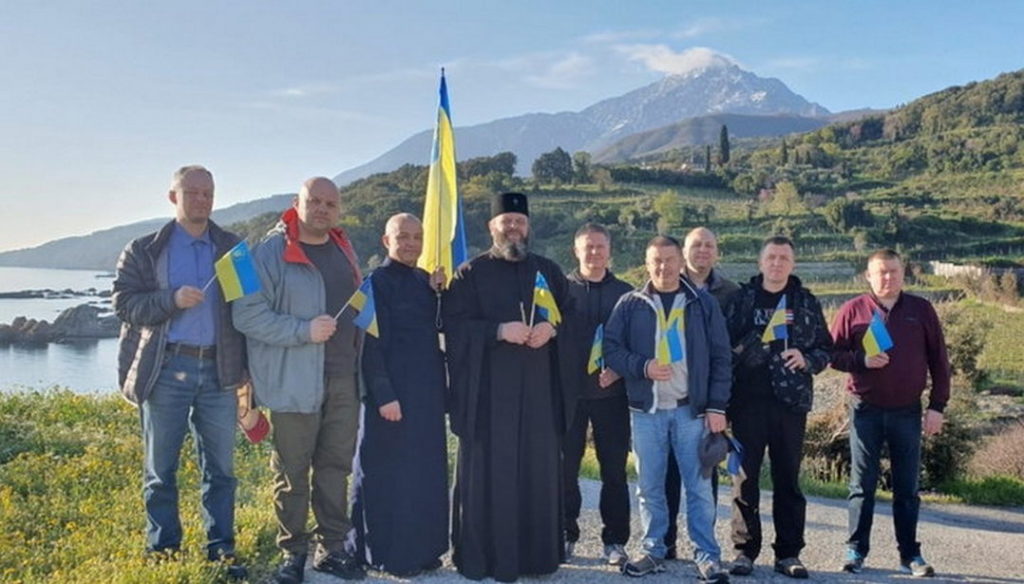 [Mount Athos, July 2, 2019]  The Sacred Community of Mount Athos was offended by the actions of a delegation from the schismatic “Orthodox Church of Ukraine” (OCU), led by “Metropolitan” Mikhail of Lutsk and Volhynia. They expressed their indignation in a letter to the Greek Foreign Minister George Katrougalos, as the Greek news agency Romfea reports.

According to Romfea, the Holy Community protested in their letter the “provocative energy” of “Metropolitan Mikhail” and his entourage, who among other things, were holding Ukrainian flags and singing the Ukrainian national anthem. Romfea cites the letter of the Holy Community[1]:

“This action by the Metropolitan following his visit to the Holy Administration constitutes a violation of Article 184 [2] of the Constitutional Charter of the Holy Mountain, which prohibits “all moral, religious, ecclesiastical, social, and nationalistic proselytizing, and/or propagandistic actions of any other nature, which are grounds for expulsion from the Holy Mountain […] This action is incompatible with the hesychastic, spiritual, and sacred character of our Holy Land and its thousand-year tradition, creates a dangerous precedent for the repetition of such actions by any party and the transfer of nationalist conflicts therein; and is completely contrary to the Charter of the Holy Mountain”

Finally, the Holy Community asked the Greek Foreign Ministry to take necessary measures to prevent such acts in the future, so that the character of the Holy Mountain may remain unmarred.

Earlier, the Ukrainian news agency “Union of Orthodox Journalists” reported that representatives of the “Orthodox Church of Ukraine” yelled the nationalist slogan “Glory to Ukraine — Glory to the Heroes” on the heights of Mount Athos. That was hardly the most extreme slogan yelled by schismatics.

During the All-Ukrainian Cross Procession, the Union of Orthodox Journalists made an excellent English language YouTube video comparing the cross processions of the Ukrainian Orthodox Church and that of the schismatics led by false patriarch Philaret. They noted that during the schismatic procession, participants were gathered with flags and national symbols yelling a different, yet common nationalist slogan: “Death to the Enemies”.

As evidenced, nationalism is very prevalent among these particular schismatics, and is occasionally blended together with Neo-Nazi symbolism, as discussed extensively in this articleas discussed extensively in this article, when false patriarch Philaret blessed a “fresco” apparently depicting people burning alive in Eastern Ukraine, Kalashnikov assault rifles, and the Nazi Wolfsangel among other things.

It is important to stress that no one was opposed to a group of Ukrainians holding Ukrainian flags, or singing Ukrainian songs in general. The issue which the Sacred Community of Mount Athos was protesting was what they described as the “provocative” energy of the delegation on the Holy Mountain.

As defined in article 184 of the Charter of Mount Athos, all forms of nationalist displays are forbidden on the Holy Mountain. Still, as the Sacred Community was deadlocked on the issue, they resolved in late Februaryresolved in late February to allow each monastery to decide for itself whether or not it will receive members of the OCU. Some Athonites have welcomed the OCU, while other monasteries such as Dochariou, ZographouDochariou, Zographou, and St. Panteleimon’s, and St. Panteleimon’s have closed their gates to the schismatics.

Recently, OCU schismatics were not welcomed in two Athonite monasteries, after which they used deception and blended in with a crowd to gain entrance. After attempting to enter the Church of the Holy Sepulcher in Jerusalem in the same way, the Jerusalem Patriarchate instituted strict document checksinstituted strict document checks to verify that any clergy from Ukraine are members of the Ukrainian Orthodox Church.

We recall that Archimandrite Ephraim, the abbot of Vatopedi Monastery, was earlier threatened with defrocking if he refused to attend the enthronement of the OCU “metropolitan” Epiphany, and while the abbot arrived in Kiev, preserving his monastic obedience, he suffered a heart attack from the stresssuffered a heart attack from the stress and shock of the situation, and was hospitalized.

Share. Twitter Facebook Pinterest LinkedIn Tumblr Email
Previous ArticleWHAT HAVE WE IN AMERICA LEARNED ABOUT THE PATRIARCHATES? WHAT CAN WE OFFER TO THEM THAT WILL SERVE OUR HOLY CHURCH?
Next Article ARCHBISHOP OF AMERICA ELPIDOPHOROS, OR THE END OF ALL ILLUSIONS ABOUT THE PHANAR