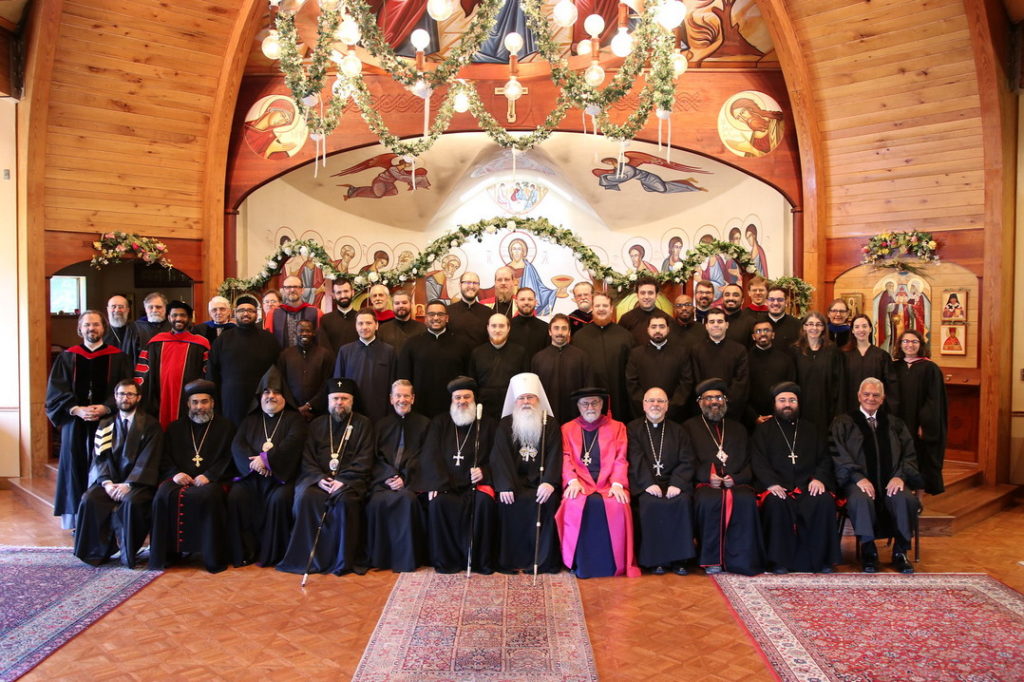 On Saturday morning, His Beatitude the Most Blessed Tikhon, archbishop of Washington and metropolitan of All America and Canada of the Orthodox Church in America (OCA), presided at Divine Liturgy at Three Hierarchs Chapel. At the Divine Liturgy, His Beatitude elevated Rev. Dr. David Mezynski, the Seminary’s Director of Residential Life and Admissions, to the dignity of archpriest.

Metropolitan Tikhon officially opened the 2019 Commencement Exercises Saturday afternoon, followed by welcoming remarks from Seminary President Archpriest Chad Hatfield. Among the many distinguished guests were His Holiness Moran Mor Ignatius Aphrem II, patriarch of Antioch and All the East of the Syriac Orthodox Church; His Eminence Nicolae (Condrea), Metropolitan of the Romanian Orthodox Metropolia of the Americas; His Eminence Mor Dionysius John Kawak, archbishop and patriarchal vicar of the Archdiocese of the Syriac Orthodox Church for the Eastern United States of America; His Eminence Ayub Mor Silvanos, archbishop of America, Canada & Europe Regions of the Malankara Syriac Knanaya Archdiocese; His Grace Zachariah Mar Nicholovos, metropolitan of the Northeast American Diocese of the Malankara Orthodox Syrian Church and Seminary Board member; and His Grace Bishop Vahan Hovhannisyan, primate of the Diocese of France of the Armenian Church.

“We have warm memories of the time His Holiness spent as an archbishop of the eastern United States, where he was known for his work with the youth and overseeing the growth and expansion of his parishes,” said Metropolitan Tikhon. “Now as the 123rdpatriarch of Antioch and All the East, he serves not only as an archpastor to his flock, but as an ardent advocate for the protection of Christians in Syria and the Middle East and throughout the world.”

“Publisher, philanthropist, patron of the arts, humanitarian—Alex Machaskee, you are an accomplished leader who has worked tirelessly and have served in numerous capacities of leadership,” said Archpriest Dr. Sergius Halvorsen, the faculty secretary, as he announced Machaskee’s honorary doctorate. “You exemplify the virtues of dedication, clear vision, and sacrificial charity in the care of the neighbor.”

The Commencement Exercises continued with the Salutatory Address given by Laura Zane Wachsmuth, this year’s class salutatorian

“In all of these opportunities, through all of the blessings we have been given at St. Vladimir’s, it is clear to me that Christ is at work here in a powerful way,” Laura said in her address.

The Commencement Address was delivered by Archpriest Dr. Alexander Rentel, who is transitioning from full-time professor at the Seminary to adjunct faculty in order to fulfill his recent appointment as chancellor of the Orthodox Church in America.

Father Alexander, a popular professor at St. Vladimir’s, received a standing ovation as he approached the podium to speak.

“The knowledge that comes from theological education should not satisfy us with the satisfaction of simple vocational outcomes based on clearly stated goals or even broadly based education… but a knowledge of Him who was not found in the tomb; a knowledge of Him who Mary Magdalene thought to be the gardener,” said Fr. Alexander, who also reminisced about the events that led him to pursue studies in the Church and celebrated the discipline of theology.

“I’m not asserting that you need to be an academic to be saved—God alone saves,” he said. “I am, however, arguing that we all must come to a knowledge of God in order to be saved.”

“The glory of seminary education is to fulfill the canonical mandate of teaching on one hand and acquiring knowledge on the other…so that this knowledge can be taught and acquired anew.”

Following the Commencement Address, Academic Dean Dr. Ionut Alexandru Tudorie led the conferral of degrees on the Class of 2019. Two of the twenty-two graduates received their degrees in December from the Seminary but were formally honored and participated in Saturday’s ceremony.

President of the Student Council Daniel Bein then announced the winner of this year’s St. Macrina Award for Excellence in Teaching, selected each year by student vote, to Priest Dr. Varghese M. Daniel, assistant professor of Malankara Studies.

Bein read from Seminarians who had written about Fr. Varghese’s excellent teaching and guidance.

Following the award, graduate Priest Herman Fields delivered a moving and heartfelt Valedictory Address, at times fighting back tears as he addressed his colleagues.

“I wish, in one sense, [the Seminary]would almost have given me a crown as the valedictorian, so that I could break it into little pieces and give a little piece to all of my fellow students,” he said. “You are the ones who taught me what liturgy is—liturgy is to give our lives to Christ.”

“You have sacrificed so much to be here,” he continued. “You have given up jobs and homes and financial security and knowing what’s going to happen tomorrow—you have given it up to serve God.”

“You are all my concelebrants in the liturgy.”

At the conclusion of the Commencement Exercises, His Beatitude Metropolitan Tikhon offered closing remarks for the Class of 2019, recalling the message of Fr. Alexander’s commencement address.

“I encourage all of you, both the graduates and those who are continuing to search for that knowledge of God, that you will remember the strength and the beauty of our Lord Jesus Christ, who is ‘the Way, the Truth, and the Life,’ and that your own relationship with Him will build that foundation of humility and love to care for your fellows…and that you will share that with all those you are in contact with throughout your life.”

Listen to the 2019 Commencement in its entirety