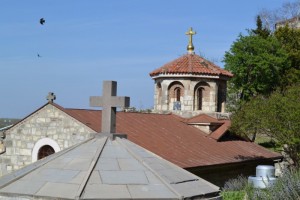 BELGRADE – Serbian Orthodox Church (SPC) is one the most successful “companies” in Serbia, and according to revenue is in third place, just behind NIS (Oil Industry of Serbia) and EPS (Electric Industry of Serbia), writes Serbian daily “Blic”.

Of course, SPC is not registered as a company, but 40 dioceses annually collect about 140 million euros, according to a survey conducted by “Blic”.

The Church is unaccountable for its financial statements, not even to the public. That is why, with the help of insiders in the top of the Patriarchate of the SPC, the daily tried to discover one of their biggest secrets.

When it comes to SPC financies, only a few details are known to the public. Metropolitan Amfilohije revealed that the Monastery Ostrog in 2014 earned 2.4 million euros, and that this year the budget of the Metropolitanate is 770,000 euros. And bishop of Zica Justin dismissed the abbot of the Monastery Zica because she did not pay the “tax” of 30,000 euros per year to the eparchy.

In times of crisis eparches of the SOC were one of the biggest investors. The money was invested in hotels, wineries, agriculture, because the state does not charge taxes on the revenue from selling candles, religious rites, space rent. Of all of these revenues in 40 dioceses annually comes between 130 and 150 million euros, reveals one of the insiders from the top of the SPC.

Another insider explains that “an eparchy can earn up to five million euros per year” just from selling candles and religious rites.

A business developed by the majority of dioceses, from which they earn well, should be added here. Within the church complex buildings are rented, land is leased, industrial facilities, wineries are opened. Only the Diocese of Zahum-Herzegovina exports to the USA about 100,000 bottles of its wine, explained the insider.

Regardless of the crisis, most of the money comes to the Church from donors. Specifically, “a religious fad” has brought prosperity to the Church.

New believers belive that they will wash away their sins if they donate to the church, so large amounts of money goes to the diocese. In one Belgrade church, a known criminal found his name on the list of donors, the same one who a few years ago was killed in an ambush. This honor was given to him on the basis of the donation of 500,000 euros, explained one of the most respected bishops of the Serbian Orhotodox Church, who insisted to remain anonimous.

The state budget pays for social and health insurance of SPC priests, and 9 million euros will be allocated from the budget for this purpose this year. This is the only official data on income of the Church, when it comes to the public money.

And if the Church would pay taxes, as is the case in many European countries, ten schools or two hospitals could be built annually. However, the Ministry of Finances says that the Church is exempted by law of tax duties. The VAT law stipulates tax exemption for the services of religious character by registered churches and religious communities.

In addition, churches are also exempted from the payment of property tax.

The attitude of the state is that the SPC and other religious communities should not pay property tax until all their property seized after the war is returned to them, said Mileta Radojevic, director of the Directorate for cooperation with churches.

How much money has the SPC shows also a case from February 2013, when the chief treasurer of the Archbishopric of Belgrade-Karlovac, S.Z., was arrested for stealing nearly a million euros in cash from the Patriarchate. He took 19.5 million RSD, 40,000 Swiss francs, 50,000 dollars and 890,000 euros.

According to the Serbian Daily “Blic”, Church profit is invested in hotels, wineries, agriculture and tourism, ranking Serbian bishops among the largest investors.

It is estimated that bishops have invested, in the last few years, several hundred million euros in facilities that do not have a church purpose.

Only Metropolitan Amfilohije confirmed that the Church is making profit. He does not hide that he does not keep believers’ money in the Episcopal account, but seeks to make profit by investing it.

This metropolitanate, according to Montenegrin media, has in recent years invested a lot more money in the construction of tourist facilities, than the Montenegrin state.

Amfilohije says that this is not a sin.

“Church building apartments and runs hotels is metropolitanate’s business, in the glory of the God, and to the good of the people,” said Metropolitan.

Unlike him, other bishops do not want to comment on their business ventures.

It is estimated that a better standing diocese can earn about five million euros, of which the most is in cash. Bishop decides where will the money end up.

Religious analyst Zivica Tucic says that under the church law dioceses are those that collect revenues.

“Each diocese has to set aside four percent of their income for the Patriarchate. The main income of the diocese comes from selling candles, but in recent years also from developing economies. Part of the money is set aside for the construction of facilities which are not in the service worship, while these decisions should be made by diocesan committees that need to control the flow of money. However, in practice it is not controlled,” said Tucic.

Nemanja Nenadic from the organization “Transparency Serbia” says that the control of the flow of money, including the money of the Church, must exist.

“Otherwise, it opens the risk of corruption and the gray economy,” said Nenadic.

Tucic believes that the corruption is present in the Church, but that it should not be generalized.

“Some dioceses are full of money, but there are those that are not and whose priests cannot earn a living because their salary is paid by the ceremony. Such is the case with the parishes in the Diocese of Timok, but also in Raska-Prizren. Not only rich bishops make the Church, but also the poor priests,” said Tucic.

Such division is confirmed by priest in Negotin, Dragoslav Glisic.

“I have five children. I serve in the Diocese of Timok. Those villages are deserted and you cannot feed your family from rituals. I barely earn 5,000 dinars (approx EUR 40) per month,” said Glisic.

As “Blic” has learned, a Belgrade priest, who in his parish has about 200 households, only from religious rituals can earn up to 16,000 euros annually.

“That amount of money is not small and that is why the majority of priests are struggling to spend their working life in the big city and parish. In addition to that money, there are other revenues that can be earned in churches in big cities. These are primarily donations from believers, which can daily amount to 50,000 dinars. When it comes to religious holidays, donations are tripled. Part of this money should go to the Diocese, but these revenues are always reduced, or part of them ends in priests’ pockets,” said priest D.M. from Belgrade for the daily.

He said that the Bishop determines how much each parish must give to the diocesan coffers.

“For our church it is 12,000 euros per month. In previous years it was less, but after the Bishop conducted a control and determined that the priest was hiding part of his earning, the diocesan tax for our parish was increased for 3,000 euros,” he said.

In addition, each church has its donors, who increase revenues.

“A donor plate, that stands in the church, give huge amounts of money, mostly from businessmen, but also so-called controversial businessmen. In 2013 our church received 600,000 euros this way,” he said.

“I did not know that I need to pay for faith”

“These three fingers I use to cross myself and when I say “God help” are the same as in the one who has money or doesn’t have it. Then why the priest looks differently at us who don’t have it than at those who have it,” says Mirjana Ercegovcevic (46) from Dublje near Sabac for “Blic”.

She says that local priest Uros Zivkovic omitted them when he consecrated the water for Easter and only because they did not have the money to pay him. Priest Zivkovic dismissed the charges, but confirmed that family Ercegovcevic “owns him money for services.”

“We do not have the money, we work in wage and everything we earn there is what we have. It is true that we have not paid the priest in the last two years when he came to consecrate the water for Slava and Easter,” said Mirjana who lives in a household with her brother Zoran (51).

She says that she was unpleasantly surprised and hurt when the priest did not visit their house before Easter.

“The priest did not come to consecrate the water for Easter. Why he omitted only our house? When he came a few days ago to consecrate the waer for our slava – Djurdjevdan, I asked him, and he replied:’How long do you think I will work for you for nothing?’ I told him that I did not know that I need to pay for faith, and he brazenly replied that it is exactly so,” said Mirjana.

Although they are very poor, they don’t ask anyone for help.

“I’m not asking for help, but is it possible that a priest has so little understanding for us? I am aware of my situation, but it hurts when others humiliate you because of it,” said Mirjana.

Priest Uros Zivkovic dismissed the charges and added that he is not obliged to work for free.

“It is not true that I did not go to consecrate water for Easter. I went three times and I haven’t found them at home. I went to visit them before slava, and Mirjana began that conversation when I finished the consecration ritual,” said Zivkovic and added that Ercegovcevic family “are not strong believers.”

“I have never seen them in the church. Until a person goes to the liturgy, fasts, communions, I cannot accept him as a beliver,” he said.

He added that although priests do not have a salary they have to pay for social and health insurance. He expect Ercegovcevic family to pay its debt, but not to him but as a voluntary contribution to the church. Then, he said, he will decide to consecrate the water in their home again.

He added that the Bishop of Sabac Lavrentije told the clergy not to go to those who do not pay them.