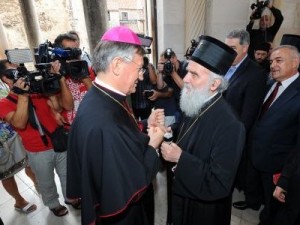 The Archbishop of Split and chairman of the Croatian Bishops Conference (HBK) council for dialogue with the Serb Orthodox Church, Marin Barisic, on Thursday met at Split’s Cathedral of St. Domnius with the head of the Serb Orthodox Church, Patriarch Irinej, and both dignitaries supported the unity of Christians and overcoming the differences between Roman Catholics and Orthodox believers, saying they have Jesus Christ in common.

Speaking about the need for unity among Orthodox believers and Roman Catholics, Patriarch Irinej said, “May God help bring back the time when we were one and closest to one another.”

He expressed regret, without saying if he was referring to Serb Orthodox or Croat Catholic priests, that many priests had committed crimes.

“With God’s help, we will be able to peacefully analyse the evil that existed in our past and may something like that never happen again,” the Serb Orthodox dignitary said.

Archbishop Barisic recalled during the meeting that St. Domnius’ Cathedral was the world’s oldest cathedral, more than 17 centuries old, built at the time of unity of Catholic and Orthodox believers. He underlined that Patriarch Irinej’s speech was the first address by a Serb Orthodox Church head in that cathedral.

Welcoming the Serb Orthodox dignitary, Barisic said it was nice when “brethren meet”, adding: “We have so much in common, we share a 1,000-year-long history and culture founded on Jesus Christ, we share St. Domnius and so many saints from East and West, and I would say that Our Lord Jesus Christ continues to unite us today.”

“There are few differences between us and somehow they prevailed,” Archbishop Barisic said, underlining that more frequent meetings between Roman Catholic and Serb Orthodox Churches were necessary so that it could be shown that “we are one and on the same path”.

“We are on the path to realising the wish for the single church of Christ, that cannot be accomplished through politics and diplomacy but is rather a fruit of the Holy Ghost,” Barisic said, saying that he was glad to see the Church sometimes overtaken by Catholic and Orthodox believers cooperating on the ground, adding that he wanted that cooperation to be “a bridge on the way to building a single Church of Christ.”

Commenting in his address on relations between Catholic and Orthodox believers, Patriarch Irinej said that they had had a “tragic past”.

“Huge differences arose from irrelevant issues concerning the teachings of the Eastern and the Western Church. The differences between us became much more important than what we have in common, which caused us to stop being one and becoming one another’s enemy, inflicting a wound on the Church of Christ,” Patriarch Irinej said.

He noted that it was high time the two Churches’ leaders analysed the current situation and restored unity.

The Serb Orthodox dignitary also welcomed Pope Francis’s advocacy of talks between representatives of the Croat and Serbian peoples and their respective churches to discuss the past and present and current problems in their relations.

“Maybe those who do not want to see Croatia and Serbia as two important factors in the Balkans have had a role in (those problems),” said Patriarch Irinej.

He said that in the last two days he had visited areas of Croatia where the Serb people and Orthodox believers had lived, underlining that the situation in those areas was now difficult because “people of Orthodox faith dare not pass through some settlements because of insults being shouted at them.”

He called on Archbiship Barisic to help solve problems regarding the construction of a church to be dedicated to St. Sava in Split, whose construction site he visited earlier in the day with Split Mayor Ivo Baldasar.

He said that “there are several Catholic churches” in Belgrade, adding that he was glad that in Serbia “no Croat suffered because they were Croats and no Catholic suffered for being Catholic.”

Archbishop Barisic gave as a present to his guest a copy of the Evangeliarium Spalatense book of the four gospels, which he said was believed to date back to the 6th century.

You can see more at photogallery Patriarh Irinej and Bishop Marin Barisic.