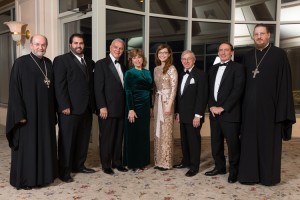 YONKERS, NY [SVOTS Communications] – During St. Vladimir’s Orthodox Theological Seminary’s 75th Anniversary gala celebration on November 7, 2013, seminary leaders made several noteworthy announcements, including a stellar report about accreditation renewal, the reception of significant donations earmarked for endowed scholarships and special programs, and the bestowal of rare gift from the Ukraine: the relics of the Holy and Great Prince Vladimir, patron of the Seminary. More than 430 guests gathered for the black tie dinner hosted by the Seminary’s Board of Trustees at Glen Island Harbour Club, New Rochelle, NY, and celebrated the good news during an evening designed to evoke remarkable memories and point out significant milestones for the Seminary, begun in 1938 in rented quarters in New York City and now situated on 12 beautiful wooded acres in Westchester County.

“The Evaluation Committee from the Association of Theological Schools (ATS) Commission on Accrediting, which visited our campus recently, will recommend a 10-year reaccreditation for our school and its programs, without any notation,” said The Very Rev. Dr. John Behr, dean of St. Vladimir’s. “This recommendation means that St. Vladimir’s is recognized to be working at the highest standard possible.

“The Evaluation Committee were especially commendatory about the culture of excellence, transparency, and critical-self reflection that they found at our school, and that does, indeed, mark everything we do and have done for the past seventy-five years, and will continue to do,” noted Fr. John.

The ATS team visited the campus October 21–24, interviewing students, staff, faculty, and administrators. Immediately after its visit, the team notified both Fr. John and seminary Chancellor/CEO The Very Rev. Dr. Chad Hatfield of its recommendation, which will be reviewed for final approval by ATS’s national Board of Governors in February 2014.

Throughout the evening, Master of Ceremonies Theodore Bazil, longtime former Director of St. Vladimir’s Seminary Press and now senior advisor at the Seminary, made public recent gifts, all of which are earmarked as endowments for either student scholarships or special projects. Among these were significant donations from two seminary trustees: a $750,000 donation from Trustee Protodeacon Peter Danilchick, and his wife, Tanya, to establish the “Danilchick Family Endowment for Pastoral Studies” for students enrolled in the Seminary’s new Doctor of Ministry program; and a $50,000 donation from Trustee Brian Gerich, to establish the “Dr. Albert Rossi Endowment” for student scholarships.

Additionally, $250,000 from an anonymous donor was given to establish an endowment for the newly envisioned “Institute for Sacred Arts at St. Vladimir’s Orthodox Theological Seminary.” The Institute is an element of the Seminary’s 2020 Strategic Plan and is being proposed as a center where theological scholarship and practical artisanship will comprise student training, eventually leading to a Master of Sacred Arts degree.

Several bequests to the Seminary, all earmarked as endowments for student scholarships, also were announced, including: a $1M bequest from Lydia Meshenko, held by The Pittsburgh Foundation; a $154,000 bequest from Susan Kushner; and a $110,000 gift from the estate of longtime seminary chapel member Georgia B. Toumbakis.

“These endowments are gifts to be held in perpetuity, and they represent a high level of trust and commitment by our donors to our institution,” said Mr. Bazil. “With their reception, the Seminary is charged with the responsibility to preserve, protect, and steward these gifts.”

Father Chad also expressed deep gratitude for the many recent monetary gifts received by the Seminary on the occasion of its Diamond Jubilee, observing, “These gifts are essential for our special projects and scholarships, but I remind all of our generous supporters that we annually draw only a small percentage from these endowments to keep the principal amounts in them stable and sound, and that our operational costs, which are covered by our Annual Fund, are still underfunded.”

“Perhaps the joy of this 75th Anniversary celebration will resonate with our friends and church family to increase support for our day-to-day operations,” he quipped, “which, as I understand, have historically run on ‘shoe-strings.’ —I’d like to see those shoe strings turn into strong life lines.”

Father Chad in turn acknowledged the extraordinary gift of the relics of St. Vladimir, received through His Eminence, The Most Rev. Metropolitan Philip, archbishop of Poltava and Myrhorod, of the Ukrainian Orthodox Church, Moscow Patriarchate, in Kyiv, saying, “When the relics were brought to St. Vladimir’s three years ago, we thought that was a once-in-a-lifetime blessing, but now the Church in Ukraine has graced us with the permanent blessing of the relics of our patron saint, along with a valuable Book of Gospels commemorating the 1025th Anniversary of the Baptism of the Rus’.”

Adding to the joy of the occasion were the presence of guest speakers His Grace, The Right Rev. Basil (hon. D.D.), bishop of the Diocese of Wichita and Mid-America of the Self-Ruled Antiochian Orthodox Christian Archdiocese of North America; and The Very Rev. Dr. John McGuckin, The Ane Marie and Bent Emil Nielsen Professor in Late Antique and Byzantine Christian History, Union Theological Seminary, and Professor of Byzantine Christian Studies, Columbia University. Each noted the remarkable contribution that St. Vladimir’s has made to the Church and the Academy alike worldwide. His Grace Bishop Basil noted that in speaking at the 75th Anniversary, he had come home to “the place that made me all that I am,” and that the Seminary likewise has had a “sustained impact in Orthodoxy throughout the world.” Dr. McGuckin spoke specifically about “The Contribution of St. Vladimir’s Seminary to the Discipline of Theology,” reiterating the school’s academic history and noting its continued insistence, since its founding, upon highly qualified instructors to ensure excellence.

Regrettably, the President of the Seminary’s Board of Trustees, His Beatitude Metropolitan Tikhon, primate of the Orthodox Church in America (OCA) was unable to attend the gala due to illness from pneumonia. (The Metropolitan sent a message stating he is recovering but doctors’ orders currently required bed rest and avoiding travel.) However, he sent a congratulatory message, which was read by His Eminence the Most Rev. Nikon, archbishop of Boston, New England, and the Albanian Archdiocese of the OCA, which stated in part: “St. Vladimir’s Seminary has always provided a place where these inspired leaders, together with those who taught, counseled, and administered at their sides, could share the life-giving truths of Christ and His Church with all who came, and continue to come, to this institution for spiritual and intellectual refreshment.”

Co-chairs of the 75th Anniversary Committee were Alex Machaskee, who serves as Executive Chair of the Board of Trustees of the Seminary, and Anthony Kasmer, chair of the Audit Committee of the Board. Mr. Machaskee thanked those who planned the banquet, Co-chairs Anne Glynn Mackoul, Matushka Sharon Rubis, and Tatiana Hoff, and those who planned events throughout the entire anniversary year and read a congratulatory letter from Serbian Patriarch His Holiness Irinej, archbishop of Pec and  metropolitan of Belgrade-Karlovci, which expressed best wishes and offered prayers for the “successful establishment of the St. Vladimir’s International House of Studies, including the St. Sava house of Studies.” The International House of Studies is also part of the Seminary’s Strategic Plan 2020, and it will include faculty and student exchanges with several Orthodox Christian seminaries around the globe. Several other congratulatory letters from church and political leaders were also read.

Other honored guests included: His Eminence, The Most Rev, Justinian, archbishop of Naro-Fominsk, administrator of the Russian Orthodox Church in the USA; His Eminence, Metropolitan Savas, archbishop of the Metropolis of Pittsburgh (Greek Orthodox Archdiocese of America); His Grace The Right Rev. Michael, bishop of New York and New York and New Jersey (OCA); His Grace The Right Rev. Melchisedek, bishop of Pittsburgh and Western Pennsylvania (OCA); His Grace The Right Rev. Irénée, bishop of Québec City and administrator of the Archdiocese of Canada (OCA); His Grace The Right Rev. Nicholas, auxiliary bishop for Brooklyn, and resident assistant to His Eminence Philip, archbishop of New York and metropolitan of All North America, of the Self-Ruled Antiochian Orthodox Archdiocese of North America (AOCANA); His Grace The Right Reverend Bishop John, auxiliary bishop of the Diocese of Worcester and New England (AOCANA); The Very Rev. George Roschin, representing Metropolitan Hilarion Alfeyev, chairman of the Department of External Church Relations of the Russian Orthodox Church, Moscow Patriarchate, and member of the Board of Trustees of St. Vladimir’s Seminary; The Very Rev. Dr. John Jillions, chancellor of the OCA; The Very Rev. Dr. Stephen Voytovich, dean of St. Tikhon’s Orthodox Seminary, South Canaan, PA; The Rev. Mardiros Chevian, dean of St. Nersess Armenian Seminary, New Rochelle, NY; and Matushka Marie Meyendorff, wife of Protopresbyter John Meyendorff (dean of St. Vladimir’s 1984–1992).

Other highlights of the evening included a video featuring Matushki Juliana Schmemann, wife of Protopresbyter Alexander Schmemann (Dean, 1962–1983) and Marie Meyendorff, wife of Protopresbyter John Meyendorff (Dean, 1984–1992), and Protopresbyter Thomas Hopko (Dean, 1992–2002) and The Very Rev. John Erickson, hon. D.C.L. (Dean 2002–2006); a historical slideshow; and a Silent Auction filled with items related to the history and mission of the Seminary. The Honorable Michael Spano, Mayor of the City of Yonkers, NY, presented the Seminary with a special citation on the occasion.

View the photo gallery of the evening by Robert Lisak