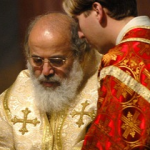 [January 27, 2012] If there is a hell with a department specially set aside for Bulgaria’s communist-era State Security and leaders of the atheist state, they may be chuckling right now, between being prodded with pitchforks and otherwise tormented.

In its early history in power, the communist regime used brutal tactics against all its enemies, the church included. Clergy were executed or murdered, jailed with or without trial, sent to “labour education” camps. While the tactics changed over time, to seeking to subvert and manipulate the Bulgarian Orthodox Church, one tactic was consistent throughout in communist propaganda – ridicule.

And it is ridicule that has been among the reactions to the revelation that most of the current governors of the Bulgarian Orthodox Church were agents of State Security. To the extent that this ultimately may damage the church and religious belief itself, this is a kind of last laugh for those who would dedicate their attention to the church to turn it to the purposes of the gospels of Marx and Lenin, rather than its founders in the Middle East those 2000 years ago.

Arguably, just as the issue of diplomats with a communist secret service past was long left neglected, that this damage is being done now is a consequence of the long official neglect of dealing with the church’s past under communism. Not that this past was entirely unknown; some historians have worked in the field, while the adamant opposition of some senior clergy to scrutiny by the Dossier Commission was a clue to the fact that there was something to hide.

Now the cat is out of the bag, and the code names of 11 metropolitans – members of the church’s governing body, the Holy Synod – are there for all to see on the Dossier Commission’s website, for those who can read Bulgarian and decipher the abbreviations.

In recent days, television viewers have been treated to the spectacle of at least one metropolitan subjected to the ordeal of pursuit down the street by microphone-wielding reporters, demanding answers as the metropolitan’s gaze is fixed irritably into the middle distance, his black cassock flapping in the winter chill as he quickens his pace.

In this case, the metropolitan was Kiril of Varna (agent Vladislav to his State Security handlers).

“I have nothing to apologise for,” he tersely insisted. “I have not done anything wrong – I never offended, I never…I served the Bulgarian Orthodox Church.”

Kiril is among the church leaders who denies working for State Security; he is also, at this writing, only one of two to visit the Commission’s offices to read his dossier.

For several years, various opinion polls have placed the Bulgarian Orthodox Church as highest-ranked among public institutions in terms of trust.

In the past year, for example, the Institute for Marketing and Analysis MBMD found that it had, in August 2010, a trust rating of 48 per cent, produced similar ratings a few months later, but in May 2011 this had dropped to 41 per cent – although the last-mentioned figure still placed the church at the top of the ratings. (For the record, the institution generally second after the church, by some margin, is the police; the judiciary floats somewhere near the bottom, though never quite managing to take the place of the least-trusted institution, Parliament.)

Of course, some have seen a latter-day concerted campaign to discredit the church. However, these theorists have included a group of left-wing academics who sprang to the “defence” of its leadership amid the Dossier Commission row, but this group’s role was called into question by centre-right commentators who said that the group was rife with former State Security people and old communists. From within the church, in a message read on behalf of the Holy Synod to Patriarch Maxim by Plovdiv Metropolitan Nikolai (who is dossier-free), there was excoriation of the media for malice towards the church.

However, in this, the church’s leadership has not helped its own cause. Before the Dossier Commission disclosures, the church had flip-flopped on in vitro fertilisation, though it blamed its baffling mixed messages on typing errors. The saga of Kiril’s expensive hybrid car had not helped. In Plovdiv, negative publicity was generated by Nikolai reportedly ordering the covering over of historic artwork in a landmark church by imported Greek ceiling panelling. Meanwhile, the outcome is awaited of a Finance Ministry investigation into what the church has been doing with its financial support from the state (this latter episode caused critics to say that while some in the church leadership objected to scrutiny by the Dossier Commission, they did not mind accepting state money.)

Amid the scandal about the former State Security agents in the church leadership, there was obvious relief that church head Patriarch Maxim himself had not been named by the Dossier Commission.

Just days after the revelations, Maxim was present at the swearing-in of President Rossen Plevneliev. Given that Plevneliev earlier vowed to do his bit to rid the Foreign Ministry’s diplomatic corps abroad of former State Security people, at least the embarrassment was spared of him kissing the hand of an ex-agent.

Prime Minister Boiko Borissov, who expressed himself “appalled” at the number of State Security agents in the Holy Synod, also publicly welcomed the fact that Maxim had not been named. Borissov said that it was unfortunate that the disclosures about the top clergy had come just as the Bulgarian people were consolidated around the church.

Among the metropolitans themselves, few have spoken publicly of feeling the need for forgiveness. Vratsa Metropolitan Kaliniki (agent Rilski) asked his flock to forgive him, if they felt that harm had been done.

In the diocese of Nevrokop, there was division. Some priests issued a statement calling for all the metropolitans identified as former State Security to step down, but other priests in the same diocese rejected the statement, stating their backing for their metropolitan, Nataniel (agent Blagoev, to State Security).

In Sliven, Metropolitan Yoaniki (agent Kirilevich), presiding over the consecration of a new church, said of the fallout from the Dossier Commission disclosures that “such difficulties should be taken as a test from God, to be borne with humility and patience”.

Elsewhere in political circles, former prime minister Ivan Kostov’s right-wing party, the Democrats for a Strong Bulgaria, made an unequivocal call for what some media had called the “agents in cassocks” to step down. Kostov’s party said that these clergy had forfeited their credibility as spiritual leaders.

As to public reaction, there were only Bulgarian-language media reports to go by. From Vratsa, one newspaper’s correspondent reported a downturn in church attendance.

On January 23, mass-circulation daily 24 Chassa said that eight Orthodox Christian parishes in the diocese of Western and Central Europe wanted to quit not only the diocese, but the Bulgarian Orthodox Church as a whole, because Metropolitan Simeon (agent Hristov) had – according to the Dossier Commission – been a high-ranking spy.

Simeon’s records reportedly amount to 27 volumes and he is said to have been accorded the rank of major.

According to the daily, Bulgarian expatriates in Austria, Berlin and Budapest had said that Simeon was not the right person to head the diocese. They wanted a transfer to the jurisdiction of the Ecumenical Patriarchate, the “first among equals” spiritual leadership of Orthodox Christianity, based in Istanbul.

A question of faith
Other voices, however, make a distinction between the Bulgarian Orthodox Church as a whole and its top clergy seen as compromised by association with State Security.

Religion correspondent Goran Blagoev has been among this group, saying that the church is much more than its synod.

So has Professor Kalin Yanakiev, professor of philosophy at Sofia University and author of books and articles on Orthodox Christian spirituality, philosophy and medieval history.

In an interview with Bulgarian-language media, Yanakiev emphasised that the Bulgarian Orthodox Church consists “mostly and above all” of its lay members.

Yanakiev said that those who had done the recruitment, of whom at least one was still alive, should become the focus of public attention.

The church, he said, would not suffer, because the church was a community of believers in Jesus; and Jesus, Yanakiev said, was ethical, and without sin.

Men in black: What did Bulgarian Orthodox Church clergy do while spying for the communist state? – Jan 18