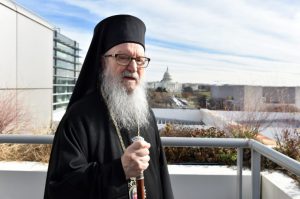 BOSTON. The Ecumenical Patriarchate seems to be leaning to replace His Eminence Archbishop Geron Demetrios of America, after the seismic revelations made exclusively the last three months by The National Herald about the economic bankruptcy of the Archdiocese, including the St. Nicholas Church in N.Y., where construction has stopped due to lack of payments by the Archdiocese.

There are some strong indications towards the workings of the Archbishop’s replacement: the cancelation of the Archbishop’s visit to the annual Epiphany celebration in Tarpons Springs, Florida, and the visit of the Deputy Foreign Minister of Greece Ioannis Amanatidis, as well as other exclusive information known to The National Herald. Specifically, The National Herald is in a position to know that His All Holiness Patriarch Bartholomew has signaled that the hierarchs who live in Constantinople be available during the Synodic meetings which will start on Monday, January 8, 2018.

The Patriarch also made reference to the problems of the Archdiocese of America in his reply to the speech of Metropolitan Konstantinos of Nicaea on the First of the Year celebration at the Patriarchate. Patriarch Bartholomew also said in his greeting to the Patriarchal personnel that in the upcoming Synod, changes and elections are expected to be made.

His Eminence Archbishop Demetrios of America will travel to Constantinople because he is a member of the Holy Synod of the Ecumenical Patriarchate during this Synodic period. Metropolitan Savas of Pittsburgh is also a member of the Synod.

The official reason given by the Ecumenical Patriarchate about Amanatidis’ visit is that he will be attending the Epiphany celebration at the Patriarchal Cathedral of St. George and also the blessing of the waters in the near Keratios Bay.

Patriarch Bartholomew expressed his festive greetings to the Deputy Minister of Foreign Affairs as well as to the entire Greek Government and expressed the wish that 2018 be the year of permanent solution to the different difficulties that the people of Greece have faced in recent years.