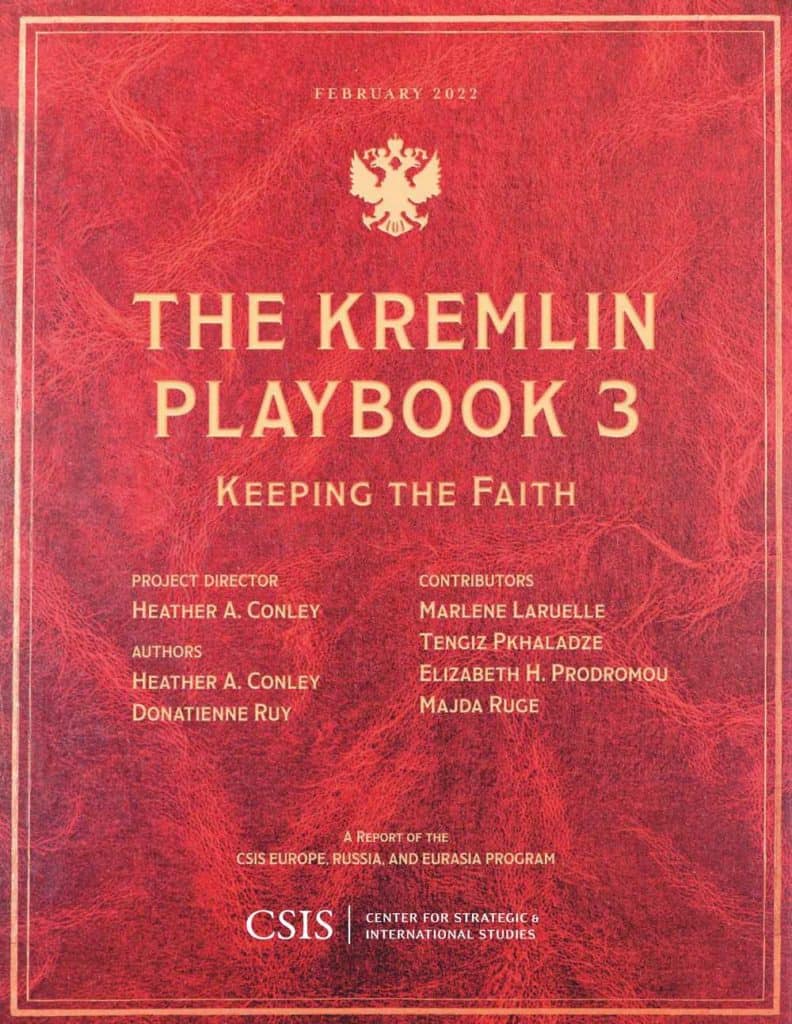 For six years, the Kremlin Playbook series has studied Russia’s malign influence efforts in Europe, primarily through the economic lens. This research showed the Kremlin has developed a pattern of malign economic influence in Europe through the cultivation of “an opaque network of patronage across the region that it uses to influence and direct decision-making.” The aim is to weaken democratic systems from within, using existing and creating new societal divides.

But what if Russia, for its own malign purposes, were to seek to influence religious or traditional views? The Kremlin Playbook 3: Keeping the Faith aims to protect these beliefs by exposing how Russian malign influence works in this particularly challenging and very personal dimension—a new strategic seam—to ensure citizens do not unwittingly become part of an influence operation. The instrumentalization of values, traditions, and religious beliefs is a relatively recent and particularly pernicious front of the Kremlin’s influence efforts in Europe and elsewhere. This study investigates these dynamics in four case study countries: Bosnia and Herzegovina, France, Georgia, and Greece.

This report explores how the United States and its European allies can protect the religious beliefs and values of their citizens from malign influence at a time when transatlantic societies are grappling with the speed of societal change. Societal anxiety and fear related to these rapid economic, demographic, and generational shifts—and the subsequent politics and political figures that seek to capitalize on them—have fueled societal divisions around the so-called cultural wars in Western societies. Through two main channels, the Orthodox world and the traditional values ecosystem, the Kremlin has taken advantage of these fears to accentuate societal wedges in Europe and Eurasia.

Greece’s Unique Significance for Russia’s Geostrategy of Weaponizing Traditionalism
Greece plays a unique role as a crucial geospace for Russian geostrategic ambitions in the twenty-first century. [362] Throughout the Cold War and in the 30 years following it, Russia has had an unwavering focus on maximizing relations with Greece. Greece is a key target because of its role in both NATO and within the global Orthodox ecosystem, making the Kremlin’s influence-building goals in Greece twofold and mutually reinforcing. In this regard, Moscow views the weaponization of traditionalism as a geometric influence builder with regional, transnational, and international impacts in Greece and, more broadly, across Eurasia.

The Church of Greece and Mount Athos are the two primary operational spaces in which Russia deploys strategic conservatism through a combination of soft- and sharp-power tools that highlight the need for transatlantic policymakers to understand the linkages between religion and geopolitics. The Church of Greece is a norms entrepreneur in that church leaders understand the social impact and political relevance of Orthodoxy as dependent on the deployment of “moral arguments and strategic constructions to persuade relevant audiences” to define both their interests and their identities.[363]

Furthermore, Orthodoxy’s crucial historical role in the establishment of the Greek state makes the Church of Greece a stakeholder in political conversations related to Greek sovereignty and the country’s place in the democratic international architecture, specifically NATO. But perhaps more powerfully, Mt. Athos, or “the Holy Mountain,” has been the undisputed center of Orthodox Christian spirituality since the tenth-century establishment of the monastic community under Byzantine imperial patronage. The self-governing, legal personality of the Monastic Republic of Mt. Athos is recognized in both the Greek Constitution and European Union law and is part of Greek sovereign territory…

This research was made possible by the support of the Smith Richardson Foundation.