[ditty_news_ticker id="27897"] The Origin of the Feast of Christmas 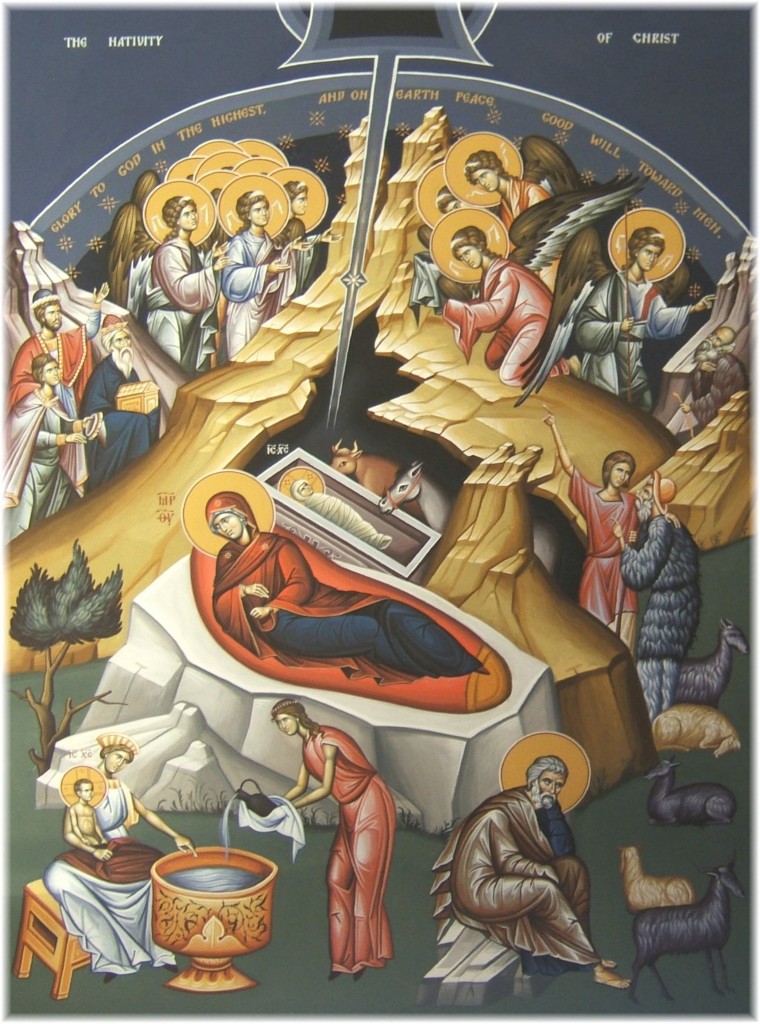 The celebration of the birth of Christ has become the most obvious religious-based public festival of American life. Its arrival in December is prepared for months in advance. It is the one event which generates the most anticipation and to which the most tradition and custom have attached themselves. Individual homes and whole cities dress up for Christmas. In popular sentiment, it has eclipsed the greater feast of the Resurrection, and has completely dwarfed its twin festival, the Epiphany.

But how did we get a feast of Christmas? What was its original purpose? How does it actually fit into the life of the Orthodox Christian Church?

The Christian Church in the first three centuries of its existence knew of only one great festival, Pentecost (by Pentecost is here meant the complete celebration of the Christian Passover from the cross and resurrection to the 50th day commemorating the descent of the Holy Spirit). Every Sunday was considered a feast in that it was a gathering to proclaim the mighty redemption brought by the death and resurrection of Christ. This festival of redemption was realized weekly by the Holy Eucharist, the presence of the victorious Risen Christ in the midst of the assembly. It was realized yearly in the great Paschal Feast in the administration of baptism. We see that in this ancient period, the interest and emphasis was not at all on the historical facts concerning what happened to Jesus, but rather how what happened to Jesus now happens to those who join His Church; how the new believer dies and rises to new life in Christ through baptism,  and how in the Eucharist the believer participates directly in the sacrifice of Christ.

In time, the celebration of martyrs’ days, that is, the yearly anniversary of a martyr’s death, came to be celebrated. But these festivals were local and usually conducted at the martyr’s tomb.

It is not until the Fourth Century that the idea of celebrating occasions in the earthly life of our Lord started to become popular. Much of this is due to the Church of Jerusalem. Special celebrations which were devised on the actual or supposed sites of the events of the life of Christ lent themselves particularly well to the celebration of historical remembrances. Thus, interest developed in where Jesus was born, where He grew up, where He performed His miracles, etc.

It is to the Church of Rome, however, that we must give the credit for the origins of the feast of the birth of Christ. But on what was this feast based, and why was December 25th chosen as the day for its celebration?

The actual historical facts surrounding the birth of Christ are clouded in mystery. No one really knows when Jesus was born. Only certain facts can be deducted from the biblical account and from history. For one thing, Jesus was definitely born in B.C. (Before Christ!). This is known, because Herod the Great died in 4 B.C., and Herod figures in the account of the Nativity given by St. Matthew. Jesus was definitely not born in winter. St. Luke mentions that the shepherds were staying out in the pasture land with their flocks, an event that does not take place in winter. We must look elsewhere for the origin of the late December celebration of the Nativity.

We find the origin of the winter feast of the Nativity not in the historical facts available concerning the birth of Christ, but in a curious astronomical phenomenon. In late December, we reach the shortest day of the year with more hours of darkness than daylight. From this point, the hours of daylight become gradually longer. This observable phenomenon was given a religious significance in the pagan Roman world. It became the feast of Sol Invictus (the Unconquerable Sun). It was popularly celebrated in Rome during the last two weeks of December as Saturnalia. What better time for the Christians to celebrate the coming of the true unconquered “Sun”? Thus, the feast of Christmas was born; the celebration of the dawning on the world of the Sun of Righteousness.

The feast was not originally called Christmas or Nativity, but Epiphany or “Manifestation.” It celebrated the idea of Christ’s coming and manifesting Himself through several events of the New Testament, and its timing was based on the feast of the Unconquered Sun. In the East, this feast of “coming” was generally kept on January 6th and in the West on December 25th. It did not originally concentrate exclusively on the birth of our Lord, but celebrated several aspects of His manifestation: the birth in the cave, the adoration of the Magi, the baptism in the Jordan, and the first miracle at Cana in Galilee. All of these themes came in one way or another to be associated with the feast of the Epiphany. The East celebrated all of this on January 6th and knew of no feast on December 25th. (The Armenian Church to this day still celebrates the nativity and the baptism together on January 6th with no celebration whatsoever on December 25th.) Egeria, a nun from Spain, traveling in Palestine at the end of the 4th century mentions a great celebration of our Lord’s coming. Thus, it was only later that the East and the West came to share both December 25th and January 6th. The East separated the Nativity from the Baptism, leaving the January date as the feast of the Baptism of Christ and accepting the December date as the feast of the Nativity. The West in turn added January 6th to its “Manifestation” celebration as the commemoration of the Adoration of the Magi.

Once this double feast, Christmas-Epiphany, entered the life of the Church it became, like Easter-Pentecost, an occasion for the celebration of baptism. The feast of Christ’s coming was seen to be appropriate for the administration of the sacrament by which Christ would come to the new believer. Several relics in our present liturgical practice hint at the baptismal connections of Christmas and Epiphany, as the long list of readings of the vigil of both days (meant to cover the time of actual baptizing), and the singing of the baptismal verse “As many as have been baptized into Christ” in place of the Trisagion. The strange notation in the liturgical books: “Nativity of our Lord … Three days Passover” and “Epiphany of our Lord … Three days Passover” can only be explained in connection with the sacrament of baptism.

The hymns of both Christmas and Epiphany reveal the origin of these days in the old winter festival of the Unconquered Sun. Note how many astronomical references we find in the Nativity Troparion: Christ is described as the “Sun” of Righteousness, who illumines those who worshipped stars (of which the physical sun is one). Jesus has come as the dawning from the East (as the sun does).

The Matins exapostilarion hymn speaks of: A newly risen day. Our Savior is the Dayspring from the East. Those who were in darkness and shadow found the Light.

Epiphany is still known as “ton Foton” (feast of Lights). Its hymns also concentrate on astronomical themes. In Vespers, Christ is described as “Bestower of light,” who desires to give light to those in darkness. In the Matins of the feast, we find: “With Your light that never sets, shine forth, O Christ.”

Unfortunately, most of society has reverted to celebrating the pagan winter holiday under the excuse of celebrating the birth of Christ. The Romans had their Saturnalia, but modern man has his Santa, reindeer, drinking parties and materialism to highlight his feast. In spite of all of this,  Christians are still called to celebrate joyfully in the Spirit, the coming of the Messiah. As the Christians of old celebrated under the guise of Saturnalia, so the modern Christian must still celebrate the true feast as the rest of our society keeps its pagan winter holiday. The Church at one time conquered and transformed that pagan holiday into the sublime celebration of the coming of the Sun of Righteousness. She still is challenged to transform and transfigure and to proclaim that coming and to lead men beyond tinsel and cheap lights to the true meaning of this holiday: the glorification of the true Gladsome Light of the Holy Glory of the Immortal Father, heavenly, holy, blessed Jesus Christ.

Archpriest Antony Bassoline was pastor of Sts. Peter & Paul Antiochian Orthodox Church in Northeast Philadelphia until 1993 when he fell asleep in the Lord. This article was first published in The Word Magazine (a publication of the Antiochian Orthodox Christian Archdiocese of North America) in December 1979).