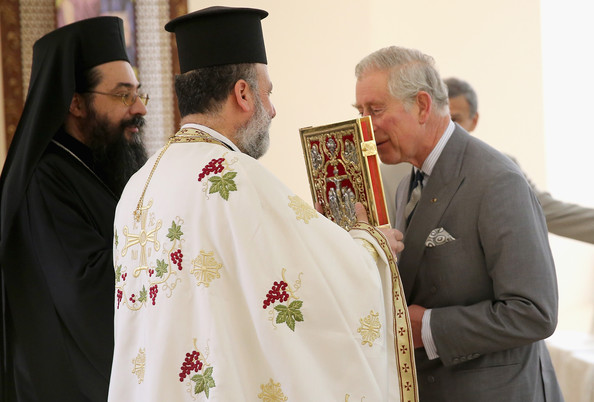 Prince Charles visits St Isaac and St George Greek Orthodox Church, which has a vibrant congregation from Orthodox communities from across the Arab world.

On the fifth day of The Prince of Wales’s tour of Saudi Arabia and Qatar, His Royal Highness visited the Doha Religious Complex. The Prince paid visits to the St Isaac and St George Greek Orthodox Church, which has a vibrant congregation from orthodox communities from across the Arab world; the Catholic Church of Our Lady of the Rosary, which holds masses in twelve different languages, and the Anglican Church of the Epiphany, catering to the many Protestant communities present in Qatar. After which, His Royal Highness took part in a discussion with Christian community leaders, based there, to hear more about their experiences of living and working in the region.

His Royal Highness lit a candle in the Greek Orthodox Church, and also watched a service from the balcony in the Catholic Church- much to the surprise of the choir who were positioned next to him.

The Prince was mobbed by worshippers as he left the Anglican Centre. The Prince met worshippers from Iraq, Syria, Egypt, Kerala in India (Where The Prince of Wales and The Duchess of Cornwall visited in 2013), Nigeria, Zimbabwe and many other countries. Children from Nigeria screamed with delight as they saw The Prince approaching with one of the young men in the crowd said “It’s Mr Prince Charles from England.”

Father Bill Schwartz, Chaplain of Church of the Epiphany said “It has been a wonderful experience for me to welcome His Royal Highness to see how our religious communities operate here in Qatar. My parishioners come from all over the world, which has enriched our community and mutual understanding of each other. Thanks to the generosity of the State of Qatar, we have a place to come together and celebrate our faith. It is a testament to Qatar’s tolerance and commitment to inter-faith harmony.”

The British Ambassador, Nicholas Hopton said “It was great that HRH The Prince of Wales was able to experience first-hand the vibrant, diverse and unique nature of the Christian community in Qatar. This built on his participation earlier in his visit in an interfaith discussion, chaired by the Doha International Centre for Interfaith Dialogue. His Royal Highness has a long experience of working with all religious communities in the UK, especially our growing Muslim community. He has a deep commitment to promoting religious tolerance and to the defence of all faiths, in all areas of the world. It has been a pleasure for us to welcome him here today to see how the culture of religious tolerance flourishes in Qatar.”

For over 20 years, The Prince of Wales has worked to encourage more tolerance between faith communities. His Royal Highness has made many notable speeches on the subject including one titled “Islam and the West”, which he delivered at the Oxford Centre for Islamic Studies in October 1993.

On the 17th December 2013 The Prince of Wales, accompanied by Prince Ghazi of Jordan, visited Coptic and Syriac Communities in London and then hosted a reception for Christians from the Middle-East where he made a speech about the challenges facing Christians in the Middle-East.

Later in the day, in Abu Dhabi, The Prince of Wales called on His Highness Sheikh Mohammed bin Zayed Al Nahyan, Crown Prince of Abu Dhabi and Deputy Supreme Commander of the UAE Armed Forces. During the meeting The Prince of Wales passed on the best wishes of Her Majesty The Queen to the President of the United Arab Emirates, His Highness Sheikh Khalifa bin Zayed Al Nahyan, who paid a State visit to the United Kingdom in April 2013.

The Prince of Wales also travelled to Bahrain where he was received at Sakhir Air Base by The Crown Prince of Bahrain before meeting the King of Bahrain at Bustan Palace, the final engagement of His Royal Highness’s four-day tour of the Middle East.

It is a particular pleasure to be able to welcome you here during this season of Advent. Although, I must say, standing here, as I am, alongside a “wise man from the East”, it does perhaps feel just a little more like Epiphany than Advent at the moment!

If I may say so, I am particularly delighted that my old friend, Prince Ghazi bin Muhammad, has so kindly taken the trouble to be here this afternoon and, indeed, has spent the whole day with me visiting the Coptic and Syrian Orthodox communities in Hertfordshire and London. His Royal Highness is present today representing King Abdullah II of Jordan at His Majesty’s particular request and in his rôle as Chief Adviser to King Abdullah for Religious and Cultural Affairs. His Majesty, whom I had the pleasure of seeing recently when he was in London, is, of course, noted for his many noble initiatives to support tolerance and respect for different faith communities. As well as his famous Amman Message in 2004, His Majesty this Autumn addressed the conference convened by Prince Ghazi in Jordan on the challenges facing Arab Christians. I am deeply grateful to His Majesty for his interest in this area and his support for the Christian communities in the Middle East.

Ladies and Gentlemen, as you may know, Prince Ghazi himself is not only a noted Islamic scholar as we’ve heard greatly to our benefit this afternoon, but, as I have just mentioned, has consistently over the years stood up for the rights of Christians around the world. Not only did he have significant involvement in the adoption by the U.N. of the World Interfaith Harmony Week, but he has also been part of the delegation involving the World Council of Churches which visited Nigeria last year, in addition to the very timely conference which he led this Autumn in Jordan on the challenges facing Arab Christians.

So, Your Royal Highness, I am especially grateful that you have taken the time and trouble to be here in the United Kingdom today. I am very conscious of the deep history between our two countries and, if I may say so, your visit today stands in the long tradition of beneficial leadership by the Hashemite Royal family.

For myself, I have for some time now been deeply troubled by the growing difficulties faced by Christian communities in various parts of the Middle East. It seems to me that we cannot ignore the fact that Christians in the Middle East are, increasingly, being deliberately targeted by fundamentalist Islamist militants. Christianity was, literally, born in the Middle East and we must not forget our Middle Eastern brothers and sisters in Christ. Their church communities link us straight back to the early Church, as I was reminded by hearing Aramaic, Our Lord’s own language, spoken and sung a few hours ago.

Yet, today, the Middle East and North Africa has the lowest concentration of Christians in the world – just four per cent of the population and it is clear that the Christian population of the Middle East has dropped dramatically over the last century and is falling still further.

This has an effect on all of us, although, of course, primarily on those Christians who can no longer continue to live in the Middle East: we all lose something immensely and irreplaceably precious when such a rich tradition dating back two thousand years begins to disappear. It is, therefore, especially delightful to see such a rich panoply of church life here to-day, including the Antiochian, Greek, Coptic, Syrian, and Armenian Orthodox Churches, the Melkite, Maronite, Syrian Catholic, Chaldean, and Roman Catholic Churches, as well as the Church of the East, and Churches established, dare I say it, somewhat more recently, including the Anglican Church!

In saying all this about the difficulties facing the Christian churches in the Middle East I am, of course, conscious that they are not the only faith community in this region suffering at the moment, nor is the Middle East the only part of the world in which Christians are suffering, but, given the particularly acute circumstances faced by the church communities in the Middle East to-day, I felt it worthwhile to draw attention to their current plight. It is important to note, above all, that the decline of Christians in the region represents a major blow to peace as Christians are part of the fabric of society, often acting as bridge-builders between other communities. This crucial role throughout Middle Eastern society is one recognized by many Muslims (who are not extremists), both Shia or Sunni, who attest to the fact that Christians are their friends and that their communities are needed.

Jordan has set a wonderful example in this regard and, as my wife and I saw for ourselves during our visit earlier this year, has again taken in a huge number of refugees, this time from Syria during the present troubles and, moreover, is, as I have alluded to earlier, under His Majesty King Abdullah II’s leadership, a most heartening and courageous witness to the fruitful tolerance and respect between faith communities.

For twenty years, I have tried to build bridges between Islam and Christianity and to dispel ignorance and misunderstanding. The point though, surely, is that we have now reached a crisis where the bridges are rapidly being deliberately destroyed by those with a vested interest in doing so – and this is achieved through intimidation, false accusation and organized persecution – including to Christian communities in the Middle East at the present time.

Let us remember we are talking about Arab Christians – Syrian, Iraqi, Palestinian, Egyptian and Saudi Christians, as well as those from other Arab countries and from Iran – not Western Christians living in the Middle East.

Now, of course, is the time to re-double our combined efforts to stress what binds the three Abrahamic faiths together and, as Christians, Jews and Muslims, to express outrage at what tears us asunder. And surely there is no better time to do so than at Christmas – to remind all of us that an emphasis on love of neighbour and doing to others as we would have them do to us are the ultimate foundations of truth, justice, compassion and human rights. Such profound wisdom is at the very heart of all three religions, however obscured the message may have become.

My prayer this afternoon is for all beleaguered communities and I believe that Western Christians ought to pray earnestly for fellow-believers in the Middle East. I am reminded that to-day in the Eastern Christian calendar it is the festival of Daniel and the three boys in the fiery furnace, Shadrach, Meshach, and Abednego. They symbolize all those who are persecuted for their faith. But the important point is: they survived!