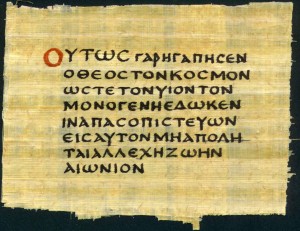 Pictured Above: John 3:16 in the original Koine Greek

Imagine that you have been invited to class with an amazing teacher only to find that the teacher chooses to instruct students in a language that none of them understand. This is the experience of many people in the Orthodox Church. Every Sunday people encounter the Divine Liturgy but far too many fail to understand it, because the Church chooses to worship in a language that is not spoken by its members. This is true of many Churches today including The Greek Orthodox Church and The Russian Orthodox Church.

How many people enter the front door of a parish every Sunday only to leave when they discover they cannot understand the Divine Liturgy?

Many different languages contribute to this problem in the United States.  Liturgical Greek is one of them. No doubt some will rush to point out that the Church is bi-lingual but the reality is that a Divine Liturgy that is only partially understood is a liturgy that does not help people understand or pass along the gift of Orthodox Christianity. No parish can flourish by cutting its liturgical worship into pieces. Orthodox youth cannot form a healthy relationship with the Divine Liturgy by only understanding parts of it Sunday after Sunday.

Here are five facts that demonstrate that the present day use of Liturgical Greek is unhealthy for the Church:

People Do Not Speak Liturgical Greek – even in Greece: Many people believe that the Greek used in Liturgy is the same Greek Language that is spoken today. This is not the case. Greek Orthodox Churches use Koine Greek for its services. This is the language of the New Testament that was spoken nearly two thousand years ago. This differs significantly from the Modern Greek language that is commonly spoken today. Today, the Church uses a language in its liturgy that is neither commonly spoken nor commonly understood by people in Greece themselves. Unfortunately, efforts to change this practice have been rejected. In 2002, the Church of Greece banned the use of any language other than Koine Greek and admonished a bishop who asserted that the Church should worship in Modern Greek. The same decision was confirmed in 2010 by Church leaders and went further by forbidding any translation of the Divine Liturgy. The end result of these actions is that an increasing number of people in Greece find themselves on the margins of their Church.

Using Liturgical Greek Divides Families:  Statistics show that nearly 85% of marriages that take place in the Greek Orthodox Church involve one spouse who chooses not to be Orthodox. The Greek Orthodox family is undergoing a radical shift that will permanently change the make-up of the Church for decades to come. Greek Orthodoxy in America is quickly becoming less ethnic while the family that is united in its witness to the Orthodox Christian Faith is becoming increasingly rare. For many of today’s youth Orthodoxy is simply another cafeteria choice between one parent’s faith or another parent’s faith. It is certainly fair to ask how the Church can effectively minister to youth and mixed marriages when it insists on worshiping in a language that is neither spoken nor understood by its families at home. Despite over seventeen million dollars in combined spending over the past ten years on youth ministry, family care and religious education, Greek Orthodoxy continues to hemorrhage young families. The most recent registry statistics show that baptisms are at recorded lows in America.

Using Liturgical Greek Discourages Evangelization:  Evangelization is not an optional part of being an Orthodox Christian. It is an essential part of being an Orthodox Christian. Contrary to popular belief, the debate over language is not a modern issue. The Church settled this issue over one thousand years ago and now glorifies two men as Equal to the Apostles who taught that the Church has a responsibility to worship in a language people understand. Sts. Cyril and Methodius faced a popular culture in the ninth century that insisted the Church could only worship in Koine Greek or Latin. Both saints resisted this error and focused on evangelization rather than language preservation. Sts. Cyril and Methodius undertook missionary journeys to the Slavic lands and created a written language for people to embrace. The end result was the conversion of millions to the Christian faith. The Slavic world is Christian today because the Church knew people must worship in a language they both speak and understand. This is true not only in the ninth century but also in the twenty-first century. It is Tradition that the Church evangelize people by meeting them where they are at and worshiping in the language they speak. Today, much of Greek Orthodoxy has forgotten the lesson of Sts. Cyril and Methodius by its insistence on the use Koine Greek in the Liturgy. The result is increasing isolation at the expense of evangelization and growth.  Registry Statistics show that Chrismations (conversions) are at recorded lows in America.

Using Greek in the Liturgy Undermines the Faith of Our Youth: No parish would ever consider holding religious education in Koine Greek. No summer camp would be considered successful if it was held in Koine Greek. No Greek Orthodox priest preaches or hears confessions in Koine Greek. And yet Koine Greek is regularly used in Divine Liturgy which is by far the most essential work of the Church. More than ever, education and youth ministry efforts struggle because young people are not given the opportunity to develop a healthy relationship with the Liturgical life of the Church. Language has become a stumbling block that keeps young people from experiencing Orthodoxy in its fullness. This is no doubt a factor in the 60% of college students who leave the Orthodox Faith.

Using Liturgical Greek Erodes Hellenism: ‘You don’t have to be Greek to be a Hellene.” These words from Fr. John Bakas speak to the very core of the challenge facing Greek Orthodoxy in America today. The great challenge today is that ethnicity is often mistaken for Hellenic values. Dance groups and food festivals are prized more than the culture of Hellenism that is present in the life of the Church and the civilized world. The use of Koine Greek today undermines a healthy understanding of Orthodoxy because its use is a barrier to acquiring an authentic Hellenic mind. Fr. John Bakas is again correct when he reminds us all that “…we can all be Hellenes by emphasizing the Hellenic roots, the Hellenic philosophy, and the Hellenic Character of Christianity…that is what we must do and we will attract others…” Liturgical Greek is not needed to preserve and grow the Greek Orthodox Church in America. What the Church needs is a liturgy that is fully understood by its members. In this way, it will truly succeed in transmitting the great ideas of Hellenism and the Hellenic nature of Orthodox Christianity to all people.

Research by the Assembly of Bishops in America shows that parishes that use all English experience an increase in attendance by as much as 30%. Many parishes in America can benefit from a 30% increase in liturgical participation. One cannot also help but wonder how many people in Greece would return to Church if modern Greek was used as the language of the Divine Liturgy.

The Orthodox Faith through the example Sts. Cyril and Methodius teaches us that no language holds a position of privilege in the Church nor does the Church consider any ethnicity or nationality uniquely sacred. Today, one should not have to learn an ancient language to understand the Divine Liturgy. On the contrary, when you look at the Tradition of Orthodox Christianity, it is the Church that has the responsibility to learn new languages so as to fulfill its vocation to spread the Gospel.

Consider the following words from Kontakion for St. Cyril and Methodius:

Let us honor our two holy enlighteners, / who by translating the divine writings/ have poured forth a well-spring of knowledge from which we still draw today. / We call you blessed, O Cyril and Methodius:/ as you stand before God, intercede fervently for our souls.

St. Cyrill and Methodius had it right over a thousand years ago.

The Church needs to follow their example more than ever today. When it comes understanding and preserving the Orthodox Christian Faith handed down to us by the Apostles, it is better to build a longer table than a taller fence.

Andrew Estocin is a lifelong Orthodox Christian. He received his B.A. with a double major in Philosophy and Theology from Fordham University. His writings have appeared in numerous publications including The Albuquerque Journal, Touchstone, Beliefnet.com and The Orthodox Observer. Andrew’s work is featured on the The Orthodox Christian Network where he writes on a variety of contemporary issues.