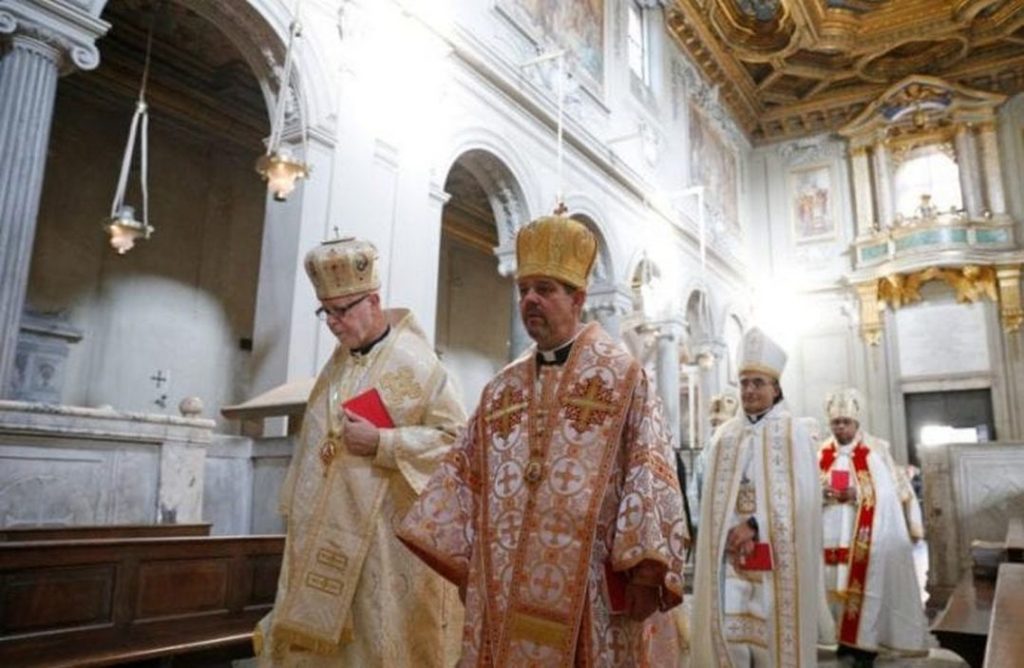 Bishop Paul P. Chomnycky of the Ukrainian Catholic Eparchy of Stamford, Conn., and Bishop Bohdan J. Danylo of the Ukrainian Catholic Eparchy of Saint Josaphat in Parma, Ohio, arrive in procession with bishops of the Eastern Catholic churches in the United States to concelebrate a Divine Liturgy at the Basilica of St. Clement in Rome Feb. 21, 2020. The bishops were making their “ad limina” visits to the Vatican. (Credit: Paul Haring/CNS.)

ROME – The last group of U.S. bishops to make their “ad limina” visits to Rome chose to celebrate the final liturgy of their visit at Rome’s Basilica of St. Clement because of its ties to the Christian East.

Under a sparkling 12th-century mosaic depicting the church as a vine growing from Christ’s cross, Archbishop Borys Gudziak of the Ukrainian Archeparchy of Philadelphia presided over the Divine Liturgy Feb. 21.

Bishops from the other U.S. Ukrainian eparchies concelebrated as did bishops from the Ruthenian, Maronite, Melkite, Syriac, Syro-Malabar, Armenian and Romanian Catholic churches.

With Ukrainian seminarians chanting and serving, and with tourists looking on, Gudziak explained that St. Clement was the second or third successor of St. Peter and may have been “consecrated or ordained” a priest by him.

During the persecution of the Christians by the Emperor Trajan, “Clement was exiled to the Siberia of the Roman Empire,” the archbishop said. “Do you know where that was? Crimea, Ukraine.”

He was executed by being tied to an anchor and thrown into the Black Sea and, 800 years later, his relics were recovered by the missionary brothers, Sts. Cyril and Methodius, known as the “Apostles to the Slavs.” St. Cyril is buried in the Basilica of St. Clement.

The brothers brought the relics to Rome along with the Scriptures and liturgical books they had translated into the local language, Gudziak said. Other missionaries protested their efforts because, at the time, Latin and Greek were the only acceptable liturgical languages.

The relics, he said, probably won Sts. Cyril and Methodius an audience with the pope, who approved their mission, so “our peoples in the Slavic lands received the good news of the Gospel,” Gudziak said.

The Eastern Catholic bishops, after meeting with Pope Francis and top officials of the Roman Curia, wanted to pray at the Basilica of St. Clement, he said, “to thank God for the eternal life he wants to give us, a gift we received through the crucifixion, a gift that is the fruit of the ultimate sacrifice of God who became man.”

At the end of the weeklong “ad limina” visit, he said, “we pray in thanksgiving for our fellowship. We thank God for the attention we received from the Holy Father, and we pray for his intentions.”

“But most of all, we pray that we can be faithful to the Gospel we just heard,” the archbishop said. And that they would imitate Jesus by being close to his people, “by being poor, by being humble as servants and apostles of the Lord who gives us life.”