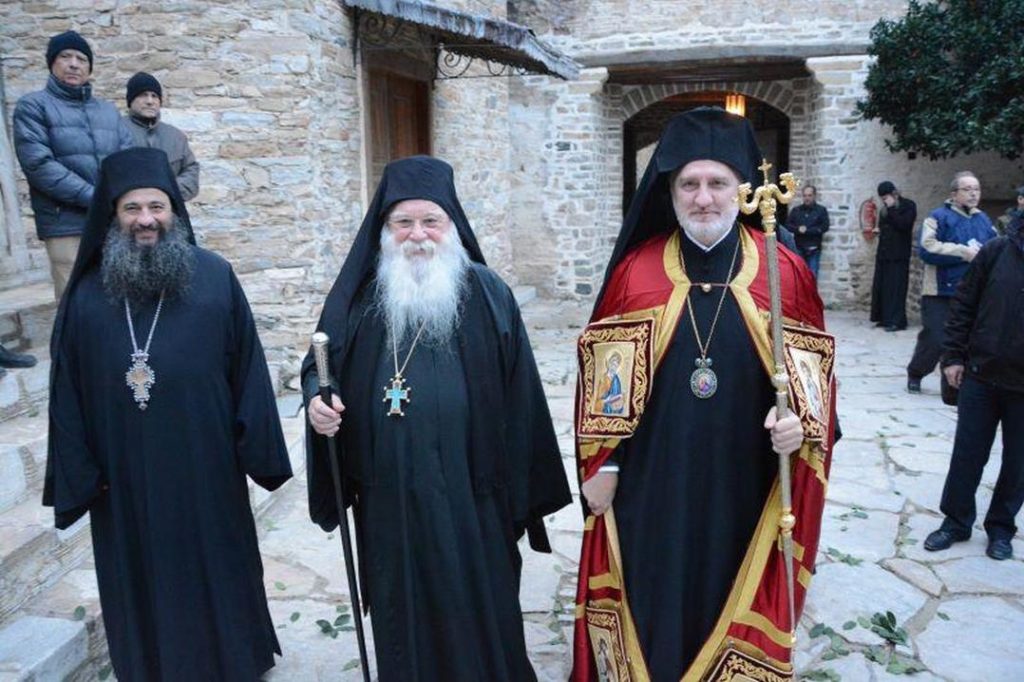 For the first time in history, a Turkish citizen has been chosen as the archbishop of the U.S. to lead the Greek Orthodox Archdiocese of America.

Elpidophoros Lambriniadis, who was born and raised in the Bakırköy district of Istanbul, is chosen to lead all the Orthodox and Greek congregation in the U.S.

A native of Istanbul, Lambriniadis had been serving as the principle of the closed Halki Seminary on Heybeliada, an island off Istanbul’s coast, and teaching as a professor at the Aristotle University of Thessaloniki in Greece. Lambriniadis said he was chosen by the council called “Holy Council’ (Synod) of the Greek Orthodox Church, which consisted of 12 members and led by the Patriarcht Bartholomeos in Istanbul.

“It is the first time in history that a Turkish citizen is chosen as the archbishop of the United States. This has a significant importance for Turkey because the archbishop of the U.S. is the religious leader of all the Greek foundations in the United States. It means he also has a political impact. Therefore this is great opportunity for Turkey because someone who knows Turkey, who understands Turkey and who speaks Turkish is going to lead the Greekcongregation in the U.S., the importance of this, is so obvious,” Lambriniadis told daily Hürriyet in a recent interview.

Lambriniadis said this situation could also serve to improve relations between Turkey, the U.S. and Greece.

“The archbishopric in the U.S. has an open line with the White House constantly. The U.S. government has many times expressed the problems of the Fener Greek Patriarchate in Istanbul in its human rights reports. Starting from the issue of the closed Halki Seminary in Heybeliada, it is not easy to find solutions to these problems in Ankara or Athens. However, there is a much higher possibility of finding a solution to these kind of problems by sitting around the same table in Washington. Especially re-opening the Halki Seminary in Heybeliada would have a very positive impact on U.S.-Turkey relations,” he added.

Lambriniadis said a big ceremony will be held in the Holy Trinity Cathedral in New York on June 22 before he takes on the post. Besides the diplomats of some other countries, he also invited Turkish diplomats to this significant ceremony.

Lambriniadis was born and raised in Bakırköy, recalling the formative days of his youth in the district which has been home to a diverse population.

“I had a very beautiful childhood in Istanbul. We used to play all together as Turkish, Greekand Armenian children. I had wonderful friendships, and we had very good relations with our neighbors. Our next door neighbor, who were a Muslim family, were sharing with us their meat every Feast of the Sacrifice Holiday [Eid al-Adha], and we were sharing with them our Yeast bread and Christmas meal every year. My best friends are still my friends from Bakırköy,” he said.

Lambriniadis said following the events in Cyprus in the 1970’s, they had to flee Greece in 1977 – when he was 10 years old — because of rising reactions toward the Greek population in Istanbul. “It was very hard for us to leave our motherland and move. The Greeks in Greece were mocking us because of our different Greek accent and the children at school were shouting and despising us, saying, ‘You are Turks!” he added.

Having completed his military service in the southern town of İskenderun in Turkey and graduating from the university in Thessaloniki in 1991, Lambriniadis moved to Germany for his master’s studies.

During that time, Patriarch Bartholomew was chosen as the patriarch of Istanbul, triggering a new wave of excitement among the young Greek religious community abroad. “He was the most loved metropolitan bishop, and after his election, I decided to return to Istanbulimmediately. I came back to Istanbul in 1994, I was already a Turkish citizen, therefore following my sanctification as a priest, I did my military service in Ankara and İskenderun,” he added.

When asked where he felt he belonged to the most, Lambriniadis said, “Istanbul, of course!”

“I think my father has had a huge impact on me about Istanbul. Because he never wanted to go to Greece, he never liked it there and he always wanted to return to Istanbul. In 2004, he had a stroke and had said, ‘I don’t want to die in Athens, take me to Istanbul with you.’ You won’t believe me but my paralyzed father started walking again one week after he returned to Istanbul! ‘Well! Bring me a Turkish newspaper and make me a cup of tea, I am going to do a crossword puzzle,’ he had said to me, because he could only solve the crossword puzzles in Turkish! I lost him two years ago, and I buried him in the Bakırköy Greek Cemetery,” Lambriniadis said.

“I am moving to the U.S., but I will be visiting Istanbul often, because my heart remains in Istanbul.”