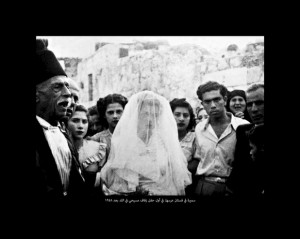 “Samira in her wedding gown, the first Christian wedding in Lod, after 1948,” from the series Scanograms #1, 2010, manipulated readymade, archival inkjet print. (Dor Guez)

Around the walls of the main gallery at London’s Mosaic Rooms hang images of broken graves, bearing inscriptions in Arabic. On some, the headstones have been smashed to pieces; on others, the covers of tombs have been removed or cracked so that skulls, limb bones and ribcages are visible.

This is the destruction left by one of several incidents of vandalism at the Christian Palestinian cemetery in Lod in present-day Israel. This was once the important Palestinian city of al-Lydd, birthplace of the late Popular Front for the Liberation of Palestine leader George Habash and the rap group DAM. Now Lod/al-Lydd is notorious for the walls which confine its Palestinian communities and discrimination against them in providing basic services such as garbage collection.

The images were taken by the late Yaqoub Monayer — like Habash, a Palestinian Orthodox Christian from al-Lydd — who reported the desecration to the police. When no culprits were found, he was given his photos back, and he left them in a kitchen drawer.

The photographs were almost thrown away by Yaqoub’s wife Samira, but instead her grandson, artist and filmmaker Dor Guez, found them and added them to the digital archive he is assembling, a huge chronicle of the Christian community in Palestine. The images featured in the Mosaic Rooms exhibition, Dor Guez: 40 Days, originate from this archive.

The archive holds thousands of images, although Guez confines himself to scanning them and then returns each photograph and object to its owners. “I’m not interested in conserving objects,” he said, but admitted that he does “preserve” meaning and memory, if not material items.

In cases set around the room, more items from the community’s past are displayed — passports and identity documents issued by the British and French Mandate authorities who ruled Palestine, Lebanon and Syria in the 1920s and ’30s. The mixture of European languages with Arabic and Hebrew scripts on the documents, and the resonant dates — identification cards marked “Palestine” and “expiry 1951” — are a reminder of the colonial power struggles which tore the region apart. Next to each item are snippets of dialogue from the owners or their descendants. That these are given only in Arabic makes for a very different encounter for different audiences.

Accompanying the photographs and objets trouvés are two films by Guez, again revolving around his family and their community. The first, Watermelons Under the Bed, shows snippets of daily life for Guez’s elderly grandparents.

As they discuss the impacts of the Israeli state on their lives, Yaqoub is seen peeling prickly pears and testing a watermelon for soundness. Both fruit are imbued with symbolism for both Palestinians and Israelis, and the film is laden with memory, nostalgia and the ongoing issue of belonging and identity for Palestinians who grew up in the State of Israel. They had to “dance between the drops,” as one family member puts it, afraid that talking publicly about “politics” will lose her son his job.

The multi-channel video piece and photographic series 40 Days, meanwhile, is a homage to the aforementioned Yaqoub Monayer, showing a few intimate moments from the last days of his life and his funeral, before turning to the ceremony held 40 days after death in the Orthodox church. Here, the domestic detail of Watermelons and the earlier section of40 Days are contrasted with the grandeur of the church service, with its incense, golden ornaments and crimson robes. It evokes a deep sense of the ancient traditions within which the daily life of this community is embedded.

We also see the bright wreaths of Yaqoub’s funeral rotting on his grave, and witness the high concrete walls and fencing which surround the graveyard in which he is buried, to protect it from the same vandalism which his pictures documented. And we see Samira sorting the photographs of that vandalism, tearing them apart where they have gotten damp and stuck together. As she goes through them, the closeness of the diminished community to which she belongs is emphasized as she recognizes the graves of her mother and other relatives. The destruction becomes deeply personal as well as culturally and politically tragic.

“Minority within a minority” 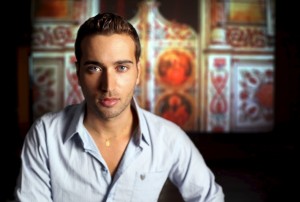 “We are a minority within a minority,” says one of the speakers in Watermelonsabout Christians in the Middle East. “Nobody would think twice if we were massacred. We are the weakest people in the region.”

This seems to fuel Guez’s desire to record and preserve images and memories — although he is half Sephardic Jewish, he identifies primarily with the remnant of Christian Palestinian society he grew up in. “It’s a culture, not just a faith,” he said, which is why he has chosen to concentrate on this aspect of his family history. “The Jewish community have enormous amounts of archives. We don’t.”

Although the show has been promoted by organizations such as the Palestine Solidarity Campaign, work such as this, which is sponsored by the Israeli Film Institute, could be met with disapproval from some supporters of the cultural boycott of Israel. Although the boycott doesn’t target individuals, works like this intersect with debates about how galleries approach pieces funded by the liberal end of the Israeli cultural elite.

Are these works — moving and thought-provoking as they are — propaganda for an Israel that wants to be seen as diverse and tolerant, or just a reflection of the fact that Palestinian artists in Israel need to live, just like everyone else? With such arguments affecting even highly-publicized films on Palestinian struggles, such as Five Broken Cameras, there’s no doubt that the Mosaic Rooms have taken a political risk in putting on this show. “Their openings are usually packed,” one guest at the sparsely-attended launch night commented. “Is it because he’s Israeli?”

Guez himself seems familiar with, and somewhat despairing of, the political tightrope he has to walk. “My best friends are Lebanese,” he said in conversation at the opening night, “but I can’t visit them because I have an Israeli passport. I’d love to show this work in Amman [Jordan], but although I can visit, no one would put this on. In Israel, I’ve never had my work censored, but in every gallery or museum, it’s the first show they’ve ever put on that deals with the Nakba.”

The exhibition is on display at the Mosaic Rooms (www.mosaicrooms.org) in London until 31 May. It will also be showing later this year in Berlin.

All images courtesy of the Mosaic Rooms.

Sarah Irving is a freelance writer. She worked with the International Solidarity Movement in the occupied West Bank in 2001-02 and with Olive Co-op, promoting fair trade Palestinian products and solidarity visits, in 2004-06. She is the author of a biography of Leila Khaled and of the Bradt Guide to Palestine and co-author, with Sharyn Lock, ofGaza: Beneath the Bombs.