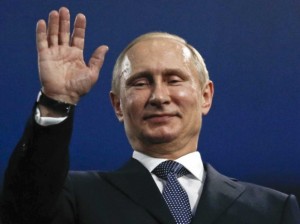 An article titled, “Iraq’s Christians See Putin As Savior,” appeared on the website of The Daily Beast in late June. It was picked up by literally dozens of “news” sites all over the Internet, contributing to the perception that Russia was actually prepared to do something on behalf of these Christians and other minorities.

The article referred to “Russia’s increasingly cozy relationship with Middle Eastern Christians” and included a photo of Putin under a halo.

But when the Christians in Iraq actually needed some help, it was the U.S. and Britain which intervened on their behalf. Humanitarian aid was delivered to the minority religious groups under attack, and air strikes were conducted against the terrorists. Later, France and Australia joined in the effort.

The Christian “Stand Firm in Faith” website asks, “So where is President Putin now that Christians are being wiped out in Iraq?”

The latter is a reference to the many photos of a shirtless Putin. He has been shirtless on a horse, holding a rifle and fishing.

Walter Hickey at Business Insider had published “39 Photos That Prove Vladimir Putin Is The Most Badass Leader In The World.” These photos also showed Putin firing weapons, on a motorcycle, and in a race car.

But this tough guy hasn’t lifted a finger of behalf of persecuted Christians in Iraq.

While some argue with justification that the U.S. effort has not been enough and too slow, I searched the website of the Russian Embassy in Washington to see if there was an announcement of Russia participating in, or offering the delivery of, aid to Christians and others in Iraq—and could find nothing.

There is no evidence that the “international partners” helping Christians and other minorities in Iraq include Russia. Instead, Putin has been trying to sneak “humanitarian aid” into Ukraine, to benefit the Russian terrorists who shot down the Malaysian airliner with nearly 300 passengers.

One can search the Internet and find all kinds of stories about how Putin is not only defending Christians but is supposed to be a Christian himself. A story carried by the Christian Post said, “Putin has long been a supporter of Christianity and Christian values within Russia. He has called for the Church to play a larger role in citizens’ social lives, better religion classes in schools, and television programs emphasizing religious values.”

Some other stories include:

The Timothy Fountain article noted that “Just over two years ago, Russia’s President received a briefing from Metropolitan Hilarion, the foreign relations representative of the Russian Orthodox Church.” Putin was told, “Every five minutes one Christian was dying for his or her faith in some part of the word.”

After hearing several examples of the persecution of Christians, Putin replied with an offer of help and said, “You needn’t have any doubt that that’s the way it will be.”