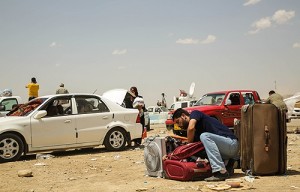 A man leaves his car and packs his bag at the Khazair checkpoint after fleeing from Mosul, Iraq on June 11, 2014. Credit: R. Nuri UNHCR/ACNUR via Flickr (CC BY-NC-SA 2.0).

Rome, Italy, Aug 8, 2014 / 04:30 pm (CNA/EWTN News).- A priest hailing from what used to be Iraq’s largest Christian city has lamented the exodus of over 100,000 Christians from the city, many of whom are fleeing on foot with no food, money or water.“Today the story of Christianity is finished in Iraq,” said a priest who identified himself as Fr. Nawar.“People can’t stay in Iraq because there is death for whoever stays,” told CNA Aug. 8.A priest who has been living and studying in Rome for the last three years, Fr. Nawar is originally from the Iraqi city of Qaraqosh (Bakhdida) on the plains of Nineveh, which was considered the Christian capital of the country until the Kurdish military forces known as the Peshmerga withdrew from it.The city then fell to forces of the Islamic State in Iraq and the Levant – known as ISIS – on Wednesday night. Since then more than 100,000 Christians have fled the city, many taking with them nothing but the clothes on their backs.According to reports from BBC News, the Islamic State militants have taken down crosses and burned religious manuscripts.“It’s a very difficult life,” Fr. Nawar said, “very, very difficult.”Noting how there are many families now “who are dying because of the temperatures, dying because they can’t eat, dying because of fear, and also because of war, of bombs,” the priest emphasized the importance of giving “a voice to all of these sick people.”“Christian people need peace in order to live. They don’t live from war. They don’t need people, or even the president, no, they need peace to live. This is important.”Qaraqosh is about 19 miles southeast of Mosul, which Islamic State forces captured in June, giving an ultimatum to Christians and other minorities demanding that they convert, pay the jizya tax or be killed.Speaking of Wednesday’s attack on Qaraqosh, Fr. Nawar expressed his gratitude and relief that his family escaped beforehand and is currently safe in the northern city of Armota, about an hour and a half from Qaraqosh by car.“My family is well because they are rich, they can rent a house,” he said, “But other families, poor, where do they go? There isn’t money.”It can cost up to 2-3,000 dollars to rent a house in Iraq, the priest explained, and often in the house, “there is no food, there is no oven, there is nothing.”“There are so many families who can’t eat, they can’t get bread,” he lamented.Of all the families currently fleeing to Kurdistan, about 70 percent of them are staying in Ankawa, Irbil and other Christian cities in the area, Fr. Nawar said.“Today many families are in Ankawa, more or less 200,000 people. But it’s difficult. All these people right now are sleeping on the street, in the garden, in the car. There aren’t any available spaces.”The priest recalled a phone conversation he had with his brother after his family left Qaraqosh, using one of their family’s two cars to help another family escape.“My family has two cars. When they escaped, there were many people who didn’t have a car, and my brother helped a family with his car. He took them in his car and they escaped with my brother.”However, “there are many people escaping on foot,” he said. “There are no cars and there is no money. There is not mercy today in this life.”“When ISIS arrives, the Christians must change religion or escape. There is no other option. Change religions, become Muslim, and those who don’t convert leave.”Rafal Cordova, an Iraqi woman originally from city of Alqush, roughly an hour from Qaraqosh, spoke with told CNA Aug. 8. She said it is the first time in history that “people are leaving Alqush.”Cordova, who has been living in the U.S. for several years, explained that yesterday evening, “people started going into the street asking for help.” While citizens from the nearby city of Dhouk helped them, “a lot of them were sleeping in the street.”She added that many of the Iraqis she knows in the United States are “happy that the U.S. is helping and sending airstrikes.”The Obama administration announced late Thursday night that it had authorized “targeted airstrikes” to prevent a humanitarian catastrophe and defend U.S. military advisors in the Iraqi capital of Irbil. It is also airdropping humanitarian aid to a Yazidi group trapped in the mountains of Sinjar without access to food or water.In addition, Pope Francis has appointed Cardinal Fernando Filoni as his personal envoy to Iraq. Cordova said she is “glad and pleased to hear of the appointment,” adding that she recently spoke to her family members, who are also happy to hear of the news.“Now they feel that the Christians in Iraq are not alone,” she said.