[ditty_news_ticker id="27897"] Archimandrite Bartholomew Mercado, The Vision of the Second Centennial: The Charter of the Greek Orthodox Archdiocese of America - Orthodox Christian Laity

Your Eminence Elder-Metropolitan Emmanuel of Chalcedon,
Your Eminence Archbishop Elpidophoros of America,
Your Eminence Metropolitan Prodromos of Rethymnon and Avlopotamos,
Very Reverend Grand Ecclesiarch Aetios,
Your Eminences and Your Graces,
Reverend Clergy,
Representatives of our Church Institutions and Organizations,
Brothers and Sisters in Christ, 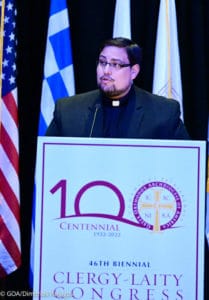 On October 8, 2020, the Holy and Sacred Synod of the Ecumenical Patriarchate issued a communique which, in part, stated that, “It placed into abeyance the force of the Charter of the Holy Archdiocese of America, with the objective of constituting a joint Committee of representatives of the Ecumenical Patriarchate and the Archdiocese for the composition of a new Charter.” Likewise, after the meeting of the Holy Eparchial Synod on October 12, 2020, a communique was issued stating, in part, that in light of the Holy and Sacred Synod of the Ecumenical Patriarchate providing an opportunity for the Archdiocese of America to draft a new Charter, “two Committees [would]be commissioned with this great and sacred task: 1) [the first] An extensive committee in America, composed of representatives of the Holy Eparchial Synod, the clergy and the laity and 2) a second committee, assigned to participate in the Joint Committee that will be devised by our Mother Church, in order to convey and communicate the essence and the ideas of the former committee.” On June 15, 2022, after the meeting of the Holy Eparchial Synod, a communique was issued stating that, “Despite the fact that the Charter of the Archdiocese continues to be practiced and observed regardless of its status — a fact that the Holy Eparchial Synod has repeatedly decided and communicated — the Archbishop suggested to the Holy Eparchial Synod that the Archdiocese submit a request to the Mother Church, asking that the current Charter be lifted out of abeyance and be formally returned to its normal status until the time at which the review process on the Charter would reach its completion.”

In order to have a better understanding on matters of such significance, it behooves us to be aware that in the one-hundred-year history of our Archdiocese, we have had five charters thus far: The Charters of 1922, 1927, 1931, 1977, and 2003.

Each of these Charters, having been carefully crafted to address specific issues according to the nature of the times, demonstrate the changing needs of our God-saved Eparchy. Therefore, I will give you some basic and brief facts regarding the administrative structure envisioned within each of these Charters and how these administrative structures developed over the past century. The first Charter of August 11th, 1922 noted the establishment of the Archdiocese and codified the structure which had been mentioned in the establishment Tomos of the Archdiocese. Namely, there was an Archdiocesan district and three additional dioceses wherein the hierarchs of these dioceses exercised administrative authority. This Charter also called for a Synod comprised of four members: the Archbishop and the three ruling bishops of the aforementioned dioceses. It must be noted that this Charter was intended from the beginning to be temporary and, indeed, it lasted only five years.

The Charter of 1927 generally retained the same administrative structure including the Synod and the same dioceses, though where there were changes in this Charter, they typically served to refine or expand upon the Charter of 1922.

The Charter of 1931 was the longest-lasting Charter and it was one of the most significant to the growth of the Archdiocese. This Charter eliminated the Holy Synod and the dioceses, bringing the entire Archdiocese under the sole oversight of the Archbishop. Moreover, all bishops serving the Archdiocese would not serve as ruling hierarchs but would, instead, be serving as auxiliary bishops to the Archbishop.  This Charter is known for its centralization of authority and for it being the longest-lasting Charter, remaining in force for forty-six years.

The Charter of 1977 would see yet another major shift in administrative structure. This Charter once again introduced a Synod of Bishops which would function as a modified provincial Synod. Moreover, a diocesan model of administration with various dioceses throughout the country was reintroduced, but it must be noted that the bishops in these dioceses would still remain auxiliary bishops under the Archbishop. They would, nevertheless, have certain administrative roles within their own dioceses.

Although July 30, 1996, is not a date associated with any Charter, it is nevertheless significant to understanding the development of our administrative structure in the Archdiocese. This date signifies the retirement of Archbishop Iakovos of North & South America and the election of Archbishop Spyridon of America. It is also the date wherein the Archdiocese of North & South America would be divided into four distinct eparchies by decree of the Holy and Sacred Synod of the Ecumenical Patriarchate. Thus, from that time forward, our Archdiocese would be known as the Greek Orthodox Archdiocese of America and would comprise the fifty states, the District of Columbia, and the Bahamas.

Understanding this history is the key to understanding our future. Similarly, comprehending Orthodox ecclesiology and the canonical tradition of our Church are the very foundation of our ecclesial life in America. Thanks to our Mother Church of Constantinople, we have thrived in America for the past 100 years because of our Orthodox ecclesiology and the observance of our canonical tradition. Let these be the hallmarks of our legacy in the next 100 years as well.

Thank you for your attention.