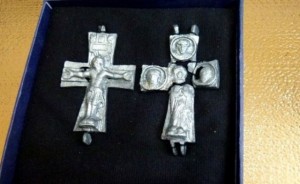 A lead cross, which is also a reliquary, found during the excavations of the Early Byzantine and medieval Bulgarian city of Missionis, also known as Krum’s Fortress, whose ruins are located near today’s northeastern city of Targovishte, has been presented to the public for the first time byBulgarian archaeologists.

“This is an absolutely unique item. Personally, I have never seen lead crosses that are also reliquaries. I have seen lead icons which are used as reliquaries but lead crosses – never,” says Prof. Nikolay Ovcharovwho presented the find to reporters together with other archaeologists at a news conference in thenortheastern city of Shumen, as cited by DarikNews.

The 14th century AD lead cross was actually discovered during the excavations of the medieval city of Missionis / Krum’s Fortress back in 2008 but its conservation and restoration have taken a long time, and it has been shown to the media and the public just now.

The cross, which has compartments for keeping holy relics of Christian saints, appears to date to the last years of the Second Bulgarian Empire (1185-1396 AD), before its conquest by the invading Ottoman Turks at the end of the 14th century.

The lead cross reliquary from the Late Middle Ages features depictions of the crucified Jesus Christand the praying Mother of God (Virgin Mary) next to him as well as three figures which are believed to represent the first followers of Christ – the apostles Andrew, Peter, and Paul.

“Christ’s suffering on the cross speaks of western influence. It is very likely that this cross originated in the last days before the fatal siege at the end of the 14th century when the fortress of Missionis was taken by the Ottoman Turks,” Ovcharov hypothesizes.

According to lead archaeologist Angel Konakliev from the Targovishte Regional Museum of History,the lead cross reliquary is also interesting because it was discovered on the main street of the Early Byzantine fortress in Missionis which during the period of the Second Bulgarian Empire, in the High and Late Middle Ages, functioned as the citadel of the medieval city.

“One half of the cross was left unfinished so it was probably really made almost in the last moment before the capture of the city [by the Ottoman Turks],” Konakliev says.

He adds that the cross appears to have been made by a self-taught craftsman who nonetheless managed to produce detailed images, and who might have hidden the unfinished Christian artifactduring the siege of Missionis / Krum’s Fortress by the Ottomans.

His colleague Nikolay Ovcharov has also announced that another lead Christian artifact has been discovered during the excavations of Missionis near Bulgaria’s Targovishte just several days ago – afine lead icon depicting the praying Mother of God (Virgin Mary) depicted with her hands raised towards the sky. The icon is dated to the 10th-11th century AD.

During their 2015 summer excavations so far, the archaeologists have also unearthed a large building from the Antiquity period, with three medieval homes built on top of it during a later historicalperiod.

Other recent finds from Missionis include previously unknown medieval coins from the time of the Second Bulgarian Empire.

Konakliev points out that Missionis / Krum’s Fortress is yet to reveal a lot of secrets because the medieval city had a territory of about 700 decares (app. 173 acres), of which the Bulgarian archaeologists have explored only about 5-6 decares (app. 1.5 acres) so far.

The Early Byzantine and medieval Bulgarian city of Missionis / Krum’s Fortress is currently beingexcavated by a total of 30 archaeologists and workers with funding totaling BGN 50,000 (app. EUR 26,000) of which BGN 30,000 have been provided by Targovishte Municipality, and the rest – byprivate donors.

“This year we haven’t received any government funding. That is why the funding that we are operating with is still rather decent. There are still some people who cherish the archaeological monuments and help us,” Konakliev notes.

During the same news conference in the Shumen Regional Museum of History, Bulgarian archaeologists also presented an 8th century AD gold coin of Byzantine Emperor Constantine V Copronymus found near the early medieval Bulgarian capital of Pliska., and the conclusions from the examination of Ancient Roman archaeological artifacts from Asia Minor and the Middle Easter seized in Bulgaria’s Shumen in March 2015.

The Early Byzantine and medieval Bulgarian fortress of Missionis, also known as Krumovo Kale (Krum’s Fortress) is located 7 km southwest of the northeastern Bulgarian city of Targovishte.The fortress has an area of 25 decares (app. 6 acres), while the medieval city itself covered an area of 150-200 decares (up to 50 acres). The eastern section of the fortress wall has a gate with two towers.

The Missionis / Krum’s Fortress was built in the 6th century AD, during the reign of Byzantine Emperor Justinian I the Great (r. 527-565 AD) as part of Byzantium’s fortifications in today’s Northern Bulgaria designed to stop the barbarian invasions of the Slavs, Ancient Bulgars, and Goths. The fortress was destroyed by the barbarians in the 6th century AD. During the First Bulgarian Empire (632/680-1018 AD), in the 9th century AD an Ancient Bulgar settlement emerged on top of its ruins. At the time of the Second Bulgarian Empire (1185-1396 AD), the fortress wall was rebuilt of stones and mortar as part of fortification system defending the then Bulgarian capital Tarnovgrad (today’s Veliko Tarnovo).

A lot of information about the medieval city of Missionis / Krum’s Fortress is found in the Tabula Rogeriana, the work of Arab geographer Muhammad Al-Idrisi, completed in the court of Norman King Roger II in Sicily in 1153 AD. In it, together with other medieval Bulgarian cities, Al-Idrisi mentions the mysterious city Missionis, a large thriving city at the foot of a mountain with busy markets, whose residents got rich through trade. Al-Idrisi’s work is the last written document to mention Missioniswhose name may later have been changed to Kosovo. In 1393, the Bulgarian city of Missionis / Krum’s Fortress was conquered by the invading Ottoman Turks after a fierce siege. The shallow Christian graves discovered there by the Bulgarian archaeologists testify to the slaughter committed by the Ottomans who burned down the city, and it never recovered. Ottoman historian Mehmed Nesri (d. 1520) writes that during the campaign of Turkish vizier Ali Pasha in 1393, after the Ottomans had conquered the city of Shumen, and were advancing to the west against the Bulgarian capital Tarnovgrad, they faced the fierce resistance of the strong fortress Kos Ova. Its brave lord is said to have told the Turkish messengers, “We will never renounce our master (Tsar Ivan Shishman) to obey the Turks!” Because of their resistance all of the surviving residents of Missionis / Krum’s Fortress / Kosovo were enslaved.

The exact location of Missionis / Krum’s Fortress was debated in the early 20th century Bulgarian archaeology even though Czech-Bulgarian archaeologist Karel Skorpil had estimated that it was located 7 km west of Targovishte. It was first discovered in 1962 when Prof. Dimitar Ovcharov startedarchaeological excavations on the hill known to the local population as “Krum’s Fortress”. The digs yielded stunning results – strong fortress walls from the 5th-6th century preserved up to a height of 3-4 meters. The archaeologists unearthed the ruins of two large Christian churches as well as residentialquarters. The archaeological excavations of Missionis were stopped in 1972, and were restored in 2004 by Targovishte archaeologist Angel Konakliev who discovered a second fortress wall deep inside the thick fortress nearby as well as more medieval residential quarters. His major discovery has been a third Early Christian church, a basilica, which was 34 meters long, and 10.5 meters wide. In the middle of the basilica, the archaeologists found a floor imprint of the church’s main chandelier with dimensions 3×2 meters. Apparently, it fell down at the time of the destruction of the temple which is believed to have been a bishopric cathedral because of traces from the stone pedestal of the bishop’s throne. The coins discovered inside the basilica belonged to Early Byzantine Emperors Anasthasius I (r. 491-518AD), Justinian I the Great (r. 527-565 AD), Justin II (565-574 AD), meaning that it was built in the 5th century AD. The building was destroyed in the horrific barbarian invasions of the Avars and Slavs in the 7th century. Missionis (Krum’s Fortress) was revived during the First Bulgarian Empire,and was an especially important medieval city during the Second Bulgarian Empire.