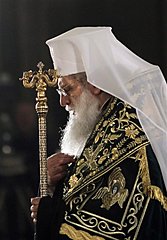 The newly elected Bulgarian Orthodox Patriarch Metropolitan Neofit attends the ceremony of his enthronement at the Alexander Newsky cathedral in Sofia, Sunday, Feb. 24, 2013. An electoral college made up of 138 members gave 90 votes to Neofit. He is considered a compromise candidate after a power struggle within the church over who will succeed the late Patriarch Maxim. (AP Photo/Valentina Petrova)

The 67-year-old Neofit was picked among three candidates shortlisted in a secret ballot by the 14 bishops that make up the Holy Synod of the church.

An electoral college made up of 138 members gave 90 votes to Neofit. He is considered a compromise candidate after a power struggle within the church over who will succeed the late Patriarch Maxim.

The new patriarch is expected to continue his predecessor’s effort to heal the centuries-old rift with the Roman Catholic Church.

Maxim was hailed for meeting with Pope John Paul II during the late pontiff’s visit to Sofia in 2002, a trip seen as warming the frosty relationship between the Orthodox Church and the Vatican.

The enthronement ceremony for Patriarch Neofit was held at Sofia’s Alexander Nevski Cathedral Church. It was attended by church elders, state officials, representatives of other religious groups and dozens of believers.

The ceremony coincided with ongoing nationwide protests against high energy bills, poverty and corruption, and demands for radical political reforms, which forced the government to resign.

The newly elected patriarch offered a public prayer for the unity of the nation.

Speaking at the ceremony, President Rosen Plevneliev voiced hope the new patriarch will contribute to Orthodox unity and the strengthening of the faith, and will preserve the integrity of the church.

In Bulgaria, the church is independent from the state, but all religious denominations must first register with the government.

Neofit takes the helm of the church in a country where Christian Orthodoxy is the declared faith of about 80 percent of 7.3 million Bulgarians, but only 10 percent see churchgoing as an important part of their lives.

Power struggles in the church have disappointed many faithful and prevented it from playing a social role in the past two decades of transition to democracy.

The main challenges Neofit will face at home are addressing church unity, the church’s isolation from current public concerns, financial troubles and the dwindling number of priests and monks.

The grave problems in the country have left their mark on the church as well. Reports of ties of church elders to the communist-era secret police, or to dubious businessmen, or their open demonstration of a luxurious lifestyle in a country gripped by poverty, have tainted the church’s image.

Last year, a panel investigating communist-era secret services announced that 11 of the 15 metropolitans had ties to those services. Among those named was also Neofit.

In an interview with the BTA news agency, Neofit said he felt no guilt about complying with something that had been a requirement when traveling outside the country. The secret services had been interested in his contacts during those trips.

“This in no way prejudiced those with whom meetings and conversations had been held,” he was quoted as saying.

Neofit, born Simeon Dimitrov, graduated from the Theological Academy in Sofia in 1971. He took the name Neofit and was sworn in as a monk in the Troyan Monastery by late Patriarch Maxim in 1975. He taught church singing at Sofia’s Theological Academy, led its choir and was its rector before becoming a bishop in 1994.

The Bulgarian patriarch is elected for life.