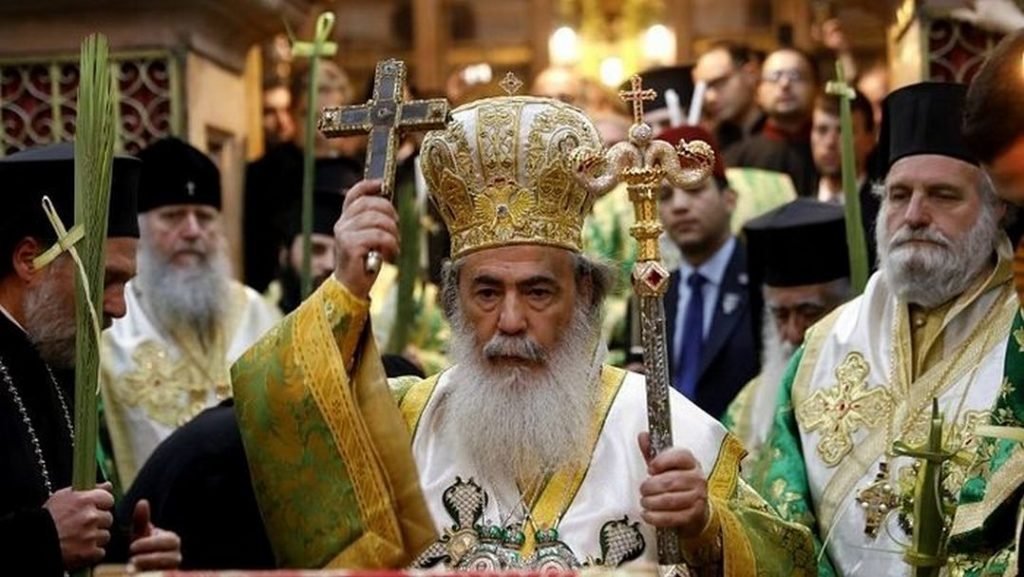 Jerusalem – Following his recent trip to Moscow, His Beatitude Patriarch Theophilos of Jerusalem has reportedly come under serious pressure from hierarchs from the Patriarchate of Constantinople and elsewhere, according to the Telegram channel “PravBlog,” with reference to its sources in the Holy Land.

The Patriarch traveled to Moscow to last month to receive the Patriarch Alexei II Award for working towards Church unity from the International Public Foundation for the Unity of Orthodox Peoples. In his speech upon receiving the award, the Patriarch invited all the Orthodox primates to gather in Jordan to discuss the sensitive issue of Church unity.

Numerous hierarchs and Synods have declared the need for a pan-Orthodox council to discuss the Ukrainian issue, but the Patriarch of Jerusalem was the first to take the step of actually inviting hierarchs for such a council.

The Patriarch’s good intentions displeased those aligned with Constantinople. Archbishop Ieronymos immediately declared that only Constantinople can call a council and thus he refuses to attend the proposed council in Jordan.

Pat. Theophilos also concelebrated with His Holiness Patriarch Kirill while in Moscow. Pat. Kirill does not commemorate those hierarchs that have recognized the Ukrainian schismatics, while Pat. Theophilos commemorates all the canonical primates. To avoid the awkwardness of the situation, the two primates commemorated only one another.

Certain media outlets, including the U.S. State Department-backed Orthodox Times, tried to turn this decision into a scandal.

Upon returning from his trip, the Patriarch of Jerusalem has experienced pressure from hierarchs of Constantinople who have been actively visiting him, “PravBlog” reports. Patriarch Theodoros of Alexandria and delegations from Greece have also been working on him.

A source in the Patriarchate earlier reported to RIA-Novosti that the Patriarch is also under pressure from U.S. Democrats, including Joe Biden.

Due to this situation, Russian clergy cannot serve there, as the Moscow Patriarchate broke communion with the Patriarchate of Constantinople due to its unilateral and anti-canonical invasion of Ukrainian Church territory.

Pat. Theophilos was also under heavy pressure in January to serve with Ukrainian schismatics on the feast of Theophany, though he successfully resisted the pressure.