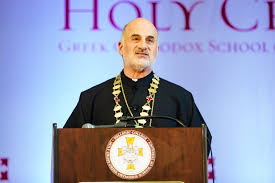 BOSTON, MA – Nothing substantial was accomplished at the Board of Trustees meeting of Hellenic College and Holy Cross Greek Orthodox School of Theology (HCHC), convened on June 7 and chaired by Archbishop Demetrios of America.

The archbishop declared that all is well and gave his full support to HCHC President Fr. Christopher Metropulos, though many Board members demand his resignation because they consider him responsible for the dire condition of the School regarding its finances, administration and reduction of enrollment.

The National Herald revealed that Archbishop Demetrios had admitted in the Holy Synod of the Ecumenical Patriarchate that the School doesn’t only have a financial problem but also “a leadership one,” making direct reference to Fr. Metropulos.

During June 7 meeting, Metropulos present his strategic plan for the “recovery” of the School and he said that funds will be raised.

Hellenic College will continue its operation next academic year, despite the small number of students. It was said that there are academic disciplines which one have one student enrolled, but the School pays professors to teach just one student.

It was also said that the resigned Deans Demetrios Katos and Demetrios Skedros will continue to teach.

Fr. Metropulos assured everyone that everything will be just fine. He said that he spoke to the academic authorities regarding accreditation.

Efforts are made to place the blame of the financial and administrative problems on the previous administration under Fr. Nicholas Triantafillou, who was always on the run traveling all over the country, presumably to raise money for the School, but it seems that the results were poor.

It is evident that animosity has occurred for months now between several Board members and Metropulos, but the Archbishop supports him strongly, despite throwing him under the bus at the Synod.

TNH has learned that a good number of Trustees are thinking of resigning, because they feel they have a fiduciary responsibility toward the Greek-American community and also legally, the Commonwealth of Massachusetts.

There are thoughts of breaking the restricted Endowment Fund to get money just to operate the School. They have already exhausted an existing Endowment, because the School didn’t have money to even cover the payroll.

The archbishop did not permit a discussion on the confidential letter-report that the Herald recently revealed, that eleven members of the Board, including some from the Executive Council addressed to the archbishop on May 8.

They discussed how the confidential letter was obtained by TNH, because the clergy and the laity from around the country became alarmed when they read it.

It is recalled here that in the letter, the trustees stated that “as fiduciaries, accept an incoming class at HCHC without a compelling recovery plan and a president capable of executing it in collaboration with staff, faculty, trustees, and other donors.”

Regarding the finances, the Trustees stated in their confidential letter that “the overall financial trend is alarming and is not sustainable. Over the three year period shown on Attachment I, HCHC has incurred or will incur cash deficits ranging from $2.2 -$3.1 million per year. Over the past 36 months, we have been averaging a monthly cash deficit of $190,000, and HCHC is now unable to make payroll without further endowment borrowing. During Fr. Christopher’s presidency, we have borrowed a total of $6.7 million from our unrestricted endowment funds (pooled accounts), and as of April 30, 2018, HCHC only had $1.1 million of such unrestricted pooled account funds remaining, as compared to a projected cash deficit through the calendar year ending December 31, 2018 of $2.6 million. Absent a significant cash infusion, HCHC will run out of money before the end of the current fiscal year (June 30).

“Realistic projections for the next two fiscal years are equally dire. The table set forth on Attachment II hereto sets forth HCHC’s projected “baseline” financial performance for the fiscal year’s ending June 30, 2019 and 2020.”