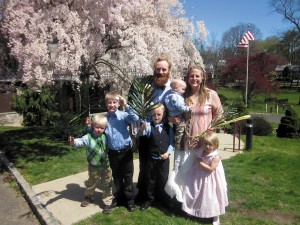 The Rev. Matthew Baker with his family on Palm Sunday 2013 in New York.
Courtesy of Seraphim Danckaert

There was little ordinary about the Rev. Matthew Baker, so it’s understandable that the reaction to the 37-year-old pastor’s untimely death is extraordinary, too.

Hundreds of people, some from across the country and others from around the world, are expected to converge in Norwich tonight for the wake and again in Cranston, R.I., Saturday for the funeral of the 37-year-old Baker, the newly appointed pastor of Holy Trinity Orthodox Church in Norwich.

Just six weeks into his first stint as a Greek Orthodox pastor, Baker was killed Sunday when he was ejected from his minivan near Exit 25 on Route 2, shortly after leaving his church where he had lingered after services to enjoy coffee and fellowship with his new parishioners.

His six children, aged 2 to 12, were in the van with him and were all uninjured; his wife, Katherine, who was ailing, had stayed home that day.

Within hours of the announcement of Baker’s death, a GoFundMe account was started to benefit his widow and children, and within days, contributions have grown to almost $500,000.

Celebrities and clerics have donated as well as churchgoers, scholars, NFL player Troy Polamalu, and people who never knew Father Baker, but learned of his death and were moved to help the family.

“As he solemnly delivered the news, Our Priest, Fr Cyprian Streza, praised Fr. Baker as a great theologian, a remarkable writer, an eloquent speaker, and a loving father to his children. Our church is Archangel Gabriel Orthodox Church in Traverse City MI. Everyone has been touched and saddened by this profound loss.”

And there was a $100 donation from Lane Brody, “part of the Holy Trinity Family in Nashville,” who posted, “memory eternal, we cry with you.”

Seraphim Danckaert of Fort Lauderdale, Fla., who started the GoFundMe page upon learning of Baker’s death on Sunday evening, said within 3 minutes it received 10 donations.

People are asking why there has been “such an outpouring of love and support for a seemingly obscure graduate student and young Greek Orthodox priest,” said Danckaert, who works for the Orthodox Christian Network and was a close friend of Baker’s for six years.

“In part, the response is simply in proportion to the human tragedy: any charitable heart is moved to compassion and action at the thought of a young widow with six young children, bereft of husband, father, and provider for life. In part, the response comes from who the Bakers are, even today: a remarkable, self-sacrificing family dedicated to service and faith,” he wrote on his GoFundMe appeal.

“Still more comes as a direct result of Fr. Matthew’s own humility and generosity during his short life. He had absolutely no money to give, but he gave abundantly of what he did have to offer. He shared his intellectual and spiritual gifts with no concern for personal gain; he gave of his time and heart; he helped countless people in personal struggles, spiritual development, and intellectual growth.”

Baker was memorialized by Fordham University, where he was a doctoral candidate in theology in the Graduate School of Arts & Sciences.

“Matthew had a brilliant mind and a great love of theology, but not simply for its own sake. He believed it mattered for people’s lives, and most especially for people’s relationship with God,” said Aristotle Papanikolaou, professor of theology and Archbishop Demetrios Chair in Orthodox Theology and Culture, who served as Baker’s dissertation adviser, in a post on the university’s website.

“He was no ordinary doctoral student,” said Papanikolaou. “He’d already developed international contacts, and was becoming internationally recognized as an emerging voice in Orthodox theology.”

J. Patrick Hornbeck, chair of the theology department, said in the same post that Baker’s work was already being translated into languages throughout the Orthodox Christian world.

“Our department was proud to count him among our doctoral students, and in his years with us, he exemplified what an Orthodox engagement with the life of the mind could be.”

Danckaert said Baker, a Roman Catholic who converted to Orthodoxy, did nothing the usual way.

“Fr. Matthew’s interests and knowledge extended far beyond theology to philosophy, literature, poetry, and music. He never went to college, instead preferring to work the night shift in a gas station in NYC, spending his time behind the cash register reading poetry,” Danckaert said in an email.

“He knew more about modern literature in several languages, and could quote from it, than any English professor I’ve encountered.”

“Fr. Matthew didn’t do anything the typical way. He accomplished what he did on pure merit, instead of conforming to the standard rules,” he said in the email. “Someone discovered him as a 20-year-old or so and paid him to travel Europe, giving lectures about modern poetry. He was just that good. Then, he taught literature in a private High School in Virginia or thereabouts, and, later in life, managed to get into graduate school, even though he never went to college for any kind of undergraduate degree.

“He actually wasn’t a fan of institutionalized education, as he found it far too mediocre. He’d rather someone just spend a lot of time reading good books – and then talk about them with interesting people who had been reading good books even longer,” wrote Danckaert.

The Rev. Dean A. Panagos, the pastor of St. Sophia Hellenic Orthodox Church in New London, said he recently met Baker for lunch and what he assumed would be a 90-minute meeting turned out to last four hours.

“He was just an incredible, energetic and enthusiastic young priest,” said Panagos, adding the two had been emailing and exchanging phone calls ever since their lunch.

Maria Valkanos, president of the parish council at Holy Trinity Orthodox Church in Norwich where Baker had started Jan. 15 as the new pastor, said she and other parishioners where there at services and the fellowship gathering last Sunday, the last time they saw their pastor.

His wife was home recovering from an illness that day, Valkanos said, and Baker was there with his six children.

“After services, there was fellowship, and he just loved talking,” she said. “We all just sat around and talked, and time just got the better of us. It had been snowing, and we all said, ‘Come on, the weather is getting bad, we better get going.'”

Baker was driving west on Route 2 in the snowstorm when he lost control of his 2002 Dodge Caravan and was ejected, suffering fatal injuries. All of the children were uninjured, with the exception of one, who had a minor bruise to the head, according to Valkanos.