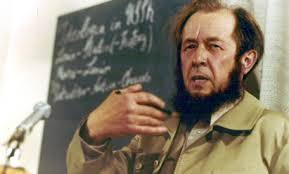 Doug Mendenhall, Special to the Reporter-News

You’ve been so caught up in worrying about the Trump-Putin fiasco that now you’ve got just two weeks to plan a party. Looming ahead is the 10th anniversary of the death of one of the 10 most influential Christians of the 20th century.

I’ll give you a hint. Two. Half a dozen.

It’s not a pope. Not Mother Teresa. Not C.S. Lewis. Not Billy Graham. Not Martin Luther King Jr. All those folks are also on the Top 10 that Church History magazine compiled as the century ended.

As a toddler, he was held aloft to get a better view of revolutionaries smashing the local Russian Orthodox cathedral. He grew into a thoughtful, honest writer, and became a sort of Jeremiah of Russia.

In that tradition, the Soviets threw him into a miserable prison. He eventually got out, then prophesied more, speaking truth to power.

The State exiled him, and he lived 20 years in the United States. He didn’t stop prophesying, though, because he considered American decadence just as dangerous to mankind’s spirituality as Soviet oppression.

Mother Russia received him back in 1994 amid cheering crowds. He died in Moscow almost 10 years ago, never fully finding his place in this world, but certain that mankind could do better.

He criticized the Russian Orthodox Church as it became entwined with post-Soviet government. Some of his thoughts about that:

Maybe that’s enough to get you started on thinking about whether to observe Solzhenitsyn’s anniversary. Maybe you’ll just ignore him and go back to that worrisome Putin-Trump relationship.

If so, let me point out that Putin’s not all bad for church folk – at least, the right church folk, because interlopers like the Mormons are restricted. The Russian Orthodox Church has official support these days, though, in exchange for which priests are speaking out against sins such as not paying your traffic fines. It’s very symbiotic, this partnership between church and state. In fact, the mansion that Putin helped build for Patriarch Kirill, head of the church, is not far from his own billion-dollar palace.

It’s very nice, if you like that sort of thing.