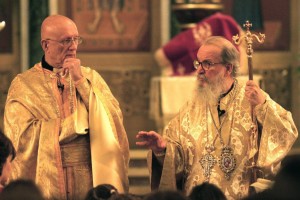 The Rev. Dr. John T. Tavlarides, who spent more than 50 years as the senior priest and later dean of St. Sophia Greek Orthodox Cathedral in Washington, building it into one of the country’s most prominent Orthodox Christian congregations, died Sept. 21 at a hospital in Berlin, Md., near his vacation home in Ocean City, Md. He was 84.

He had a heart ailment, said a son, Mark Tavlarides.

Rev. Tavlarides arrived at St. Sophia in 1956 as the first American-born priest to serve at Washington’s oldest Greek Orthodox congregation. During his 55 years in the pulpit, he was considered an innovative and sometimes controversial leader, as he guided his congregation through a sometimes tempestuous period of growth and cultural change. St. Sophia currently has about 1,500 parishioners.

“No single priest of the Cathedral has ever, or will ever, influence the course of Saint Sophia’s history to the extent that Father John did,” St. Sophia’s current dean, the Rev. Steven P. Zorzos, said in a statement.

The Greek Orthodox religion, dating to the 4th century, draws inspiration from its Byzantine heritage and relies on ancient rituals and pageantry as symbols of faith. Services at St. Sophia were conducted primarily in Greek before Rev. Tavlarides introduced a bilingual liturgy in 1961.

The change provoked controversy in some circles, but Rev. Tavlarides recognized that many of his parishioners were native-born Americans who spoke English as a first language and, in some cases, knew little or no Greek.

Nonetheless, he emphasized the church’s Hellenic heritage by instituting classes — many of them taught by his wife, Harriett — for the study of the Greek language and Orthodox traditions. Byzantine music and Greek chanting were a regular part of the cathedral’s religious services.

“We want to be eternal first and contemporary second,” Rev. Tavlarides told The Washington Post in 1977.

One of Rev. Tavlarides’s signature achievements, according to the statement from Zorzos, was an educational program called Inquiry Into Orthodoxy, offered primarily to adults and to people interested in converting to the faith. Rev. Tavlarides led the 10-week lecture series for 50 years.

He also participated in many ecumenical efforts in Washington, including presidential inaugurations and the Pageant of Peace, an organization that sponsors the annual lighting of the National Christmas Tree on the Ellipse.

In the 1960s and 1970s, Rev. Tavlarides spearheaded an ambitious remodeling of St. Sophia, which was founded in 1904 and has been at its present location at 36th Street and Massachusetts Ave., NW, since in 1955.

Scholars from the Byzantine Collection at the Dumbarton Oaks Research Library and Collection in Georgetown helped direct the restoration, which was meant to evoke the authentic feel of a Byzantine-era church.