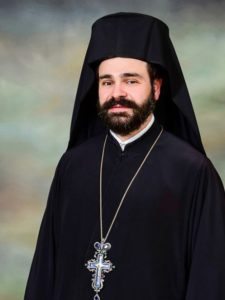 Metropolitan Nathanael Symeonides, the new leader of Greek Orthodox parishes in the Midwest, delivered a sermon at Annunciation Greek Orthodox Church in Wauwatosa on Sunday to address the embezzlement scandal of its former parish leader.

Not unlike the Apostle Peter, the Rev. James Dokos betrayed his church.

While Peter denied knowing Jesus, Dokos embezzled more than $100,000 from Annunciation Greek Orthodox Church in Wauwatosa while serving as the parish priest. Dokos used the money to buy jewelry for his wife and to pay for lavish dinners and everyday expenses, according to court records.

On Sunday, the start of Holy Week in the Greek Orthodox Church, the new leader of Midwestern Greek Orthodox parishes came to Wauwatosa to discuss betrayal, forgiveness, and trust — themes that particularly resonate with Christians this time of year.

In advance of his visit, Metropolitan Nathanael Symeonides told the Milwaukee Journal Sentinel that he wanted to make sure Wauwatosa parishioners who felt betrayed by Dokos did not also mistrust Christ.

On Sunday, Symeonides delivered the homily and talked with parishioners about their former priest. It was his first parish visit outside of Chicago.

He came to listen and answer questions in a spirit of accountability and transparency that he said he wants emphasized within the church.

Symeonides was enthroned March 17 as Metropolis of Chicago. In that role, he oversees Greek Orthodox parishes in Illinois, Iowa, Wisconsin and Minnesota as well as eastern Missouri and northwestern Indiana.

The timing of his visit to Wauwatosa hopefully will help the parish heal, he said, because Holy Week is one of the most beautiful times of the year.

“This week is a reminder of what the human condition is, and how we are really broken as people,” Symeonides said before the visit. “Holy Week is the telling and reliving of unconditional love that helps us overcome betrayal; the love that’s needed to forgive.”

Dokos pleaded guilt in 2016 to embezzling some $100,000, but under a deferred prosecution deal, received a misdemeanor conviction on the condition he complete a year of community service and meet reporting requirements.

Theft of more than $10,000 in a business setting is a felony, and carries a maximum penalty of five years in prison, five years of supervised release and a $25,000 fine.

Dokos served the Wauwatosa parish for about 20 years but had transferred to another parish by the time his crime was discovered. 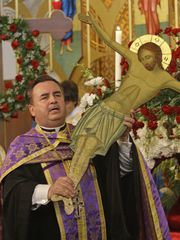 According to the criminal complaint against Dokos:

From 2008 to 2012, he diverted money from a trust that a couple had left for the construction of a cultural center at the church. During that time, he was serving as successor trustee following the death of the trust’s creator.

The theft was discovered by Annunciation’s parish council in 2013, months after Dokos moved to an Illinois parish.

Symeonides told the Journal Sentinel he hopes parishioners stunned by the actions of Dokos do not hold onto pain, anger, hurt — anything that could come between them and Christ.

It’s understandable to struggle, and to instinctively pull away, he said.

“It takes time and for people to slowly open their hearts again… I will walk with them. I will listen to them. I will guide them. The parish will bounce back, but they can only do it if they trust in Christ.”

Ultimately, Symeonides said, “the only way we can rise out of the tomb, out of the gutter, out of the hole we find ourselves in, is to open up our hand and extend it so Christ can lift us up.”

Sermon of Metropolitan Nathanael Symeonides, the new leader of Greek Orthodox parishes in the Midwest, at Annunciation Greek Orthodox Church in Wauwatosa on Palm Sunday, April 1, in which he addresses the embezzlement scandal of its former parish leader.