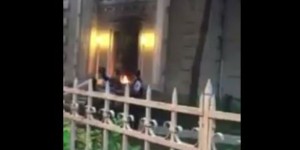 This still image shows a man attacking an Orthodox church in İstanbul.

A man attacked a church in the Kadıköy district of İstanbul with a Molotov cocktail on Tuesday, setting the building’s door on fire.

In a video purporting to show the attack, the man is seen shouting “Allahu Akbar” (God is great) and “Revenge will be taken for Al-Aqsa Mosque” as he throws a bomb at the Aya Triada Orthodox Church in the Bahariye area of Kadıköy.

The door of the church caught fire, but the blaze was extinguished shortly after the attack. The man was detained by police.