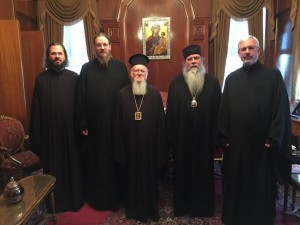 Established in 1844, the Theological School of Halki educated generations of Orthodox clergy, including 300 bishops and 12 Patriarchs. [The current Ecumenical Patriarch Bartholomew is among its graduates.] It was closed to new admissions by the Turkish government in 1971. While efforts to reopen the school have been unsuccessful in recent years, there is hope that its situation will change in the near future.

The delegation was met by Grand Archimandrite Vissarion at Istanbul’s Ataturk Airport. After meeting His Eminence, Metropolitan Elpidophoros, Abbot of Halki’s Holy Trinity Monastery, they embarked on the hour-long ferry ride to Halki Island. Upon landing, they were taken by horse-drawn carriage—cars are not permitted on the island—to the theological school complex.

Deacon Kaisarios Chronis, Halki Library Director, offered the delegation an extensive tour of the school’s library, which contains a rich collection of ancient books. He also explained ongoing efforts to catalogue and digitize the library’s holdings.

Returning to Istanbul, the delegation visited the historic Hagia Sophia. Built by Emperor Justinian in the sixth century and boasting the largest free-standing dome in the world, the cathedral became a mosque after the Ottoman conquest of Constantinople in 1453. In 1931, Hagia Sophia was taken over by the Turkish state, which has used it as a museum since 1935.

On Thursday, December 18, the Feast of Saint Sebastian, the delegation attended Matins and the Divine Liturgy at the Church of Saint Demetrios, at which Patriarch Bartholomew presided from the throne. The church is widely known for its spring, dedicated to Saint Sebastian. Patriarch Bartholomew greeted Metropolitan Tikhon and the delegation members as he entered the church.

After the Divine Liturgy, Patriarch Bartholomew offered a warm welcome to Metropolitan Tikhon and the delegation, to which the latter reciprocated. At the Phanar, they met with Patriarch Bartholomew in his office for over one hour, where they engaged in a fruitful conversation about the work of Saint Vladimir’s Seminary, the Orthodox Church in America, the Assembly of Bishops, and the situation of Orthodox Christianity throughout the world. After exchanging gifts, Metropolitan Tikhon and the delegation were hosted at a formal lunch in the Patriarchal dining room.

After lunch, Deacon Theodoros Meimaris accompanied Metropolitan Tikhon and the delegation on visits to two important sites. At the 11th century Church in Chora, a museum since 1948, they viewed the spectacular interior frescoes and mosaics that date back to the early 14th century. At the Women’s Monastery of the Life-Giving Spring, where a number of recent Patriarchs of Constantinople are laid to rest, they sang “Memory Eternal” and met with two of the nuns.

Share. Twitter Facebook Pinterest LinkedIn Tumblr Email
Previous ArticleThe Patriarch of Romania: “We must think now, 25 years after the revolution of December 1989, what we have done with our freedom”
Next Article A Christmas Festival in Ethiopia