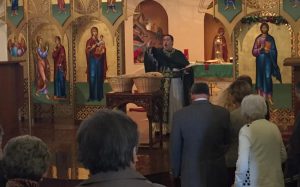 MILWAUKEE, WI – Rev. John Ketchum, priest of the Annunciation Church in Milwaukee, WI, excommunicated Parish Council Treasurer Patricia Galanis at the beginning of Holy Week, on April 8, the Saturday of Lazarus, for reasons, he said, of “disobedience to the Ecclesiastical Authority, the priest of the parish.”

Galanis is the wife of former AHEPA Supreme President John Galanis. The parish is upset and nine of the fifteen members of the parish council including the president, Dr. Clemens Stoeckl, have resigned collectively. The situation was more painful for the entire parish because the excommunication was done during Holy Week.

Initially,Ketchum announced the excommunication verbally but her husband, who is an attorney, requested it in writing. Ketchum prohibited Galanis “to approach the Holy Chalice to receive Holy Communion for one month, to show repentance and to ask forgiveness from the Lord.” Galanis has been a member of the Annunciation parish for 47 years and has offered valuable volunteer services, including having served as Parish Council president.

The nine Parish Council members who resigned collectively sent a letter to the parishioners dated April 10, stating among other things that “after much prayerful thought and consideration, we the undersigned of the Annunciation Greek Orthodox parish resign effective April 17, 2017. 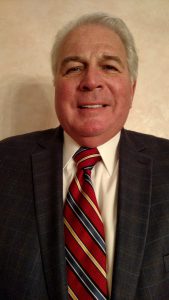 Dr. Clemens Stoeckl, President of the Parish Council, who resigned along with eight other members.

“For some time, it has become evident to us, and we believe to most of you, that there have been serious issues in the life and administration of the Annunciation Church. We joined the council in hopes that we could contribute in some way towards resolving the problems that exist.

“Unfortunately, we feel that we are no longer a democratic body and are being bullied by the priest and hierarchs to demands that are not consistent with our pledge to the congregation or the Church. We have been disrespected in ways never before in our lives.

“In order to heal and restore our beloved church we recommend new leadership in the form of a new pastor as well as bishop.”

Galanis and her husband, along with Ketchum, did not comment to The National Herald.

Stoeckl told TNH that “Rev. Ketchum told us that there is a donor who is willing to donate $92,000 provided that a member of the parish council resigns.” Stoeckl refused to name the person of the council that the donor had requested to resign in order to make the donation, and when we told Stoeckl that we already know the story and the name, he said that “the priest has never revealed who is the donor.”

Stoeckl said that “six weeks ago during a closed meeting of the Parish Council, Fr. Ketchum verbally attacked Mrs. Galanis and asked her to resign. On March 23 we had an open meeting of the Council in which Mrs. Galanis was not in attendance, she was on vacation. The priest started again saying that Mrs. Galanis should resign so the donor will give the money to pay the 2017 financial contribution to the Archdiocese. Then Fr. Ketchum turned against me saying that I am unacceptable, and the shame of the church.”

Stoeckl also said that “on the Saturday of Lazarus the ladies of the Philoptochos were in the kitchen preparing the meal for the next day, Palm Sunday. Fr. Ketchum entered the kitchen and verbally attacked Mrs. Galanis in the presence of the other women, threatening that he would excommunicate her. He asked her to go into his office alone, but she refused to go because she is afraid of him and she wanted to take some women with her, but the priest refused and he immediately excommunicated her right there.”

This is the same parish where former priest James Dokos pleaded guilty to theft of funds from the trust of a former parishioner, and was placed on a one-year liturgical suspension. According to Stoeckl, the parish is withering. He said that “ten years ago the parish consisted of 800 families. Today there are 275 families out of which just 180 have fulfilled their contribution. People refuse to come to church. This parish has been burned and it cannot afford to be burned any longer.”