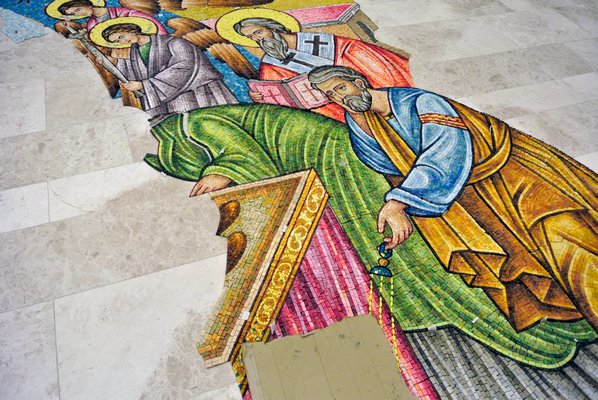 The mosaic is laid out on the Dormition of the Virgin Mary Greek Orthodox Church of the Hamptons as it will go up on the buidling.

Work on the mosaic that will grace the entrance to the Dormition of the Virgin Mary Greek Orthodox Church of the Hamptons in Shinnecock Hills began last week.

Artisans from Tuscany began assembling the mosaic, which was constructed in Italy and brought over in pieces. According to Father Constantine Lazarakis, the mosaic depicts the Dormition of the Virgin Mary, sometimes translated as the “Falling Asleep of the Theotokos.” Theotokos is the term used most often in the Orthodox Church to refer to the Virgin Mary; it means “the Mother of God.”

The icon shows a funeral scene, with the Apostles gathered around the Virgin Mary’s deathbed. At the center is Jesus Christ, looking on from heaven at the scene, and holding an infant. The infant represents the soul of Christ’s mother being received in heaven. Notably, Saints Peter and Paul are, respectively, at her head and feet, and St. Peter is holding an incense burner, showing the reverence he and the other Apostles have for her.

The mosaic was designed by Sirio Tonelli of Byzantine Mosaic International.

The mosaic is sketched on a large sheet of paper using a color key for the placement of pieces of glass. The large mosaic is cut into pieces, shipped and then put on the building.

The glass in the mosaic is made from secret ingredients on the Italian island famous for glass, Murano. Cristian Costa and Simone Quiriconi came over from Italy to install the mosaic. A large part of the job is filling in the finer pieces of glass to make the mosaic complete. They do this piece by piece, by hand.

The project should be finished in about two weeks.