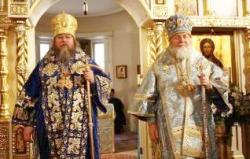 is Beatitude, Metropolitan Jonah, Primate of the Orthodox Church in America, and His Eminence, Metropolitan Hilarion, First Hierarch of the Russian Orthodox Church Outside of Russia, concelebrated the Divine Liturgy for the first time at the Synodal Cathedral of the Sign, New York, NY, on Saturday, December 10, 2011.

The celebration marked the first time in nearly 70 years that the primates and hierarchs of the OCA and ROCOR have concelebrated. It is noteworthy that the Liturgy was celebrated on the cathedral’s Patronal Feast of the Kursk-Root Icon of the Mother of God, which was present during the Divine Liturgy.

At the conclusion of the Divine Liturgy, Metropolitans Jonah and Hilarion exchanged warm greetings and spoke of the historic significance and importance of the occasion.

“I am profoundly grateful for this opportunity to come together, to pray together, to celebrate our brotherly love together as one Church. Truly, there is only one Church,” said Metropolitan Jonah. “God has called us to that love, to that communion with one another. It is my fervent prayer that from now on, we work together and cooperate together in many different projects and support one another in our common task.

“God has seen fit over the past decades that our two Churches have received different ministries, each working in different communities of people, each bearing fruit for the Lord according to His will, and going after the vineyards which He has given to us to cultivate,” Metropolitan Jonah continued. “And now He has brought us together in a new way to constantly share in the same Eucharistic cup, working together in unity to cultivate this vineyard of North America and everywhere else that God calls us to, in preaching the Gospel of Our Lord, Jesus Christ.”

“Saint Jacob was the first native American priest to be ordained on the territory of North America,” Metropolitan Jonah explained. “He was half Russian and half Aleut—a great missionary. He came returned from seminary in Russia to serve his people on the Aleutian Islands, after which he was sent by Saint Innocent to the mouth of the Yukon River, where he evangelized the Yupik people. At the end of his life he evangelized the Tlingit people. Saint Yakov is one of the greatest of the saints of Alaska, and his work is the foundation of so much of the Alaskan mission. It also is the foundation of our common work, because we are both sons of the Russian Orthodox mission and the continuation of that mission that was sent in 1794. We are both heirs of that common legacy. So it is a great joy to present to you this holy icon.”

Concelebrating with the Metropolitans was His Eminence, Archbishop Justinian of Naro-Fominsk, Administrator of the Patriarchal Parishes in the USA.

Historical background information may be found at http://www.synod.com/synod/eng2011/20111212_ensynod.html.

Photo galleries of the historic celebration may be found on the OCA web site and on the Eastern American Diocese (ROCOR) Facebook page.

A video featuring highlights of the celebration may be found here.