UPDATE: The letters are bearing fruit! See Communiqué of the Holy Eparchial Synod of the GOA (Important Charter News!) and [email protected]: Independence for the Church of America and Archbishop Elpidophoros’ April 22, 2021 Reply! 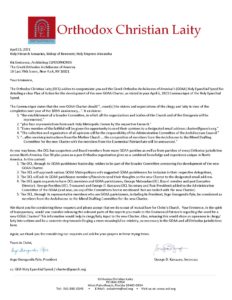 The Orthodox Christian Laity (OCL) wishes to congratulate you and the Greek Orthodox Archdiocese of America’s (GOAA) Holy Eparchial Synod for detailing a clear Plan of Action for the development of the new GOAA Charter, as stated in your April 6, 2021 Communiqué of the Holy Eparchial Synod.

The Communiqué states that the new GOAA Charter should “…meet[s]the visions and expectations of the clergy and laity in view of the completion next year of the 100th anniversary…”. It envisions:

As you may know, the OCL has supporters and Board members from many GOAA parishes as well as from parishes of every Orthodox jurisdiction across North America. Our 30-plus years as a pan-Orthodox organization gives us a combined knowledge and experience unique in North America. In this context:

We thank you for considering these requests and please accept that we do so out of mutual love for Christ’s Church.  Your Eminence, in the spirit of transparency, would you consider releasing the relevant parts of the reports you made to the Ecumenical Patriarch regarding the need for a new GOAA Charter? This information would help in clergy/laity input to the new Charter. Also, releasing this would show an openness in clergy/laity interactions and be a concrete step towards forging a more meaningful co-ministry, so necessary in the GOAA and all Orthodox jurisdictions here.

Again, we thank you for considering our requests and ask for your prayers in these trying times.Yours in Christ,

Response of Archbishop Elpidophoros on April 22, 2021 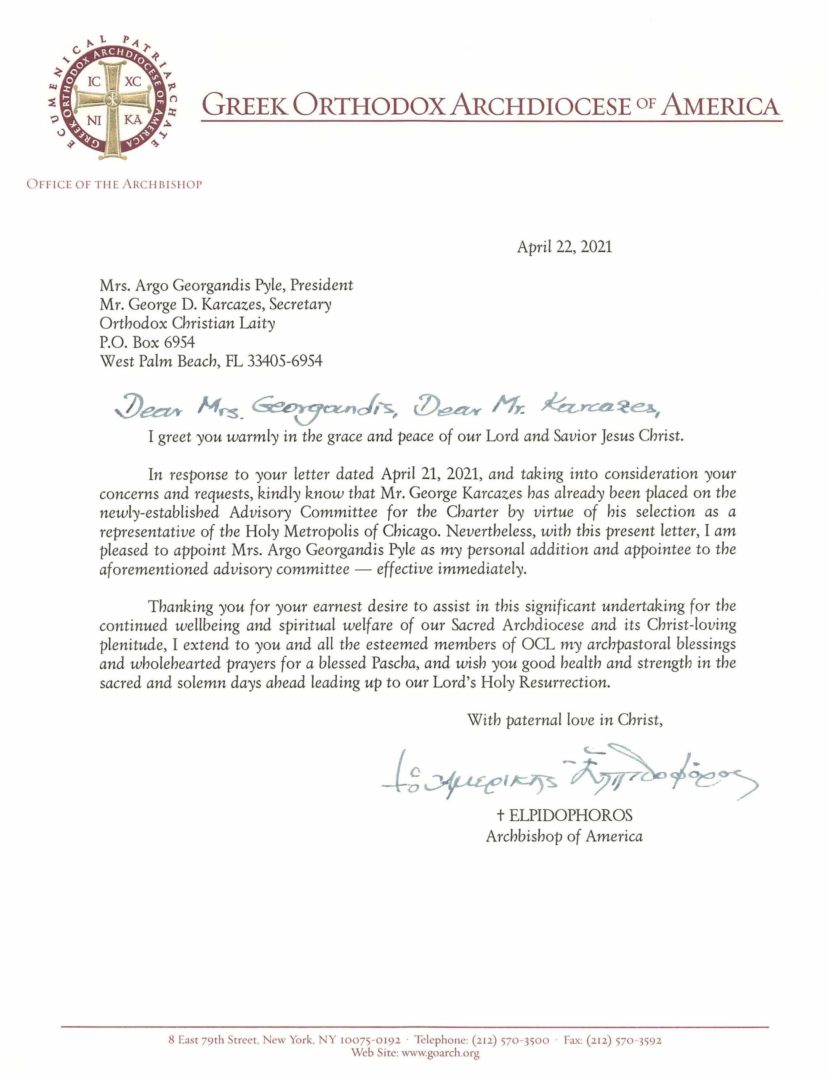 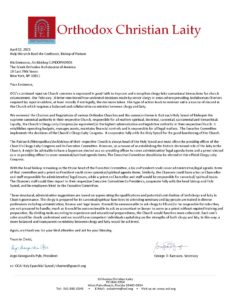 OCL’s continued input on Church concerns is expressed in good faith to improve and strengthen clergy-laity operational interactions for church advancement. Our February 16 letter mentioned how unilateral decisions made by senior clergy in areas where prevailing Archdiocesan Charters required lay input invalidate, at least morally if not legally, the decisions taken. This type of action leads to mistrust and is a source of discord in the Church which requires a balanced and collaborative co-ministry between clergy and laity.

We reviewed the Charters and Regulations of various Orthodox Churches and the common theme is that each Holy Synod of Bishops is the supreme canonical authority in their respective Church, responsible for all matters spiritual, doctrinal, canonical, sacramental and hierarchical. Equally, the Church’s Clergy-Laity Congress (or equivalent) is the highest administrative and legislative authority in their respective Church. It establishes operating budgets, manages assets, maintains financial controls and is responsible for all legal matters.  The Executive Committee implements the decisions of the Church’s Clergy-Laity Congress.  It cooperates fully with the Holy Synod for the good-functioning of the Church.

The Patriarch/Metropolitan/Archbishop of their respective Church is always head of the Holy Synod and most often the presiding officer of the Church’s Clergy-Laity Congress and its Executive Committee. However, as a means of re-establishing the historic decisional role of the laity in the Church, it might be advisable to have a layperson elected as a co-presiding officer to cover administrative/ legal agenda items and a priest elected as a co-presiding officer to cover canonical/spiritual agenda items. The Executive Committee should also be elected at this official Clergy-Laity Congress.

With the head bishop remaining as the titular head of the Executive Committee, a lay co-President could cover administrative/legal agenda items of that committee and a priest co-President could cover canonical/spiritual agenda items. Similarly, the Chancery could have a lay co-Chancellor and staff responsible for administrative/ legal issues, while a priest co-Chancellor and staff would be responsible for canonical/ spiritual issues.  The Chancery staff could then report to their respective Executive Committee Co-Presidents, cooperate fully with the head bishop and Holy Synod, and be employees hired by the Executive Committee.

These structural, administrative suggestions are based on appreciating the qualifications and potential contribution of both clergy and laity in Church governance. The clergy is prepared for its canonical/spiritual functions by attending seminary and lay people are trained in diverse professions including administration, finance and legal issues. It would be unreasonable to ask clergy to fill and/or be responsible for roles they are not prepared to handle, much as it would be unconscionable to ask an accountant or lawyer to serve as a priest without required training and preparation. By dividing tasks according to experience and educational preparedness, the Church would function more cohesively. Each one’s roles would be clearly understood and we would have competent individuals capitalizing on the strengths of both clergy and laity. In this way, a more balanced and transparent co-ministry between clergy and laity would be achieved.

Again, we thank you for your kind attention and ask for your blessing. 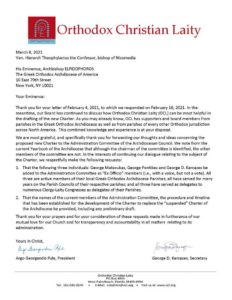 Thank you for your letter of February 4, 2021, to which we responded on February 16, 2021. In the meantime, our Board has continued to discuss how Orthodox Christian Laity (OCL) can be most helpful in the drafting of the new Charter. As you may already know, OCL has supporters and board members from parishes in the Greek Orthodox Archdiocese as well as from parishes of every other Orthodox jurisdiction across North America.  This combined knowledge and experience is at your disposal.

We are most grateful, and specifically thank you for forwarding our thoughts and ideas concerning the proposed new Charter to the Administration Committee of the Archdiocesan Council. We note from the current Yearbook of the Archdiocese that although the chairman of the committee is identified, the other members of the committee are not. In the interests of continuing our dialogue relating to the subject of the Charter, we respectfully make the following requests:

Thank you for your prayers and for your consideration of these requests made in furtherance of our mutual love for our Church and for transparency and accountability in all matters relating to its administration.

Thank you for your response to our February 2, 2021, letter regarding a proposed new Charter of the Greek Orthodox Archdiocese of America.

In our letter of February 2, we made the point that: “the role of the laity in our Church has diminished, and this should be corrected so that Church governance regains a more balanced co-ministry between clergy and laity”.

The diminution of the role of the laity in Church governance over the years is a recurring theme heard from OCL leaders, supporters and others. It is documented by Paul Manolis in “The History of the Greek Church in America: In Acts and Documents,” published in 2003, as well as by other authors. The definitive document on this topic might very well be Dr. James Counelis’ 1982 article, “Historical Reflections on the Constitutions of the Greek Orthodox Archdiocese of North and South America 1922-1982,” comparing the various Charters (1922, 1927, 1931 and 1979). Counelis clearly demonstrates how the laity’s role has eroded drastically over time from substantive to advisory to pro forma.

Two glaring examples of the marginalization of lay participation in the governance of the Archdiocese are the unilateral decisions involving the Charters of 1979 and 2003 made in violation of the Amendment Procedures set forth in those Charters.

Article XXIV of the 1979 Charter states:

“The Charter herein may be revised upon request of the Archdiocesan Clergy-Laity Congress as the need therefore arises. Revisions thereto shall be submitted to the Ecumenical Patriarchate for approval and ratification.”

“The present Charter regulating the affairs of the Holy Archdiocese of America as an ecclesiastical institution, may be amended in its entirety or in part after a proposal of the Holy Eparchial Synod submitted to the Ecumenical Patriarchate following the appropriate procedure in the Archdiocesan Council and the Archdiocesan Clergy-Laity Congress, and after the approval of the Holy and Sacred Synod of the Ecumenical Patriarchate to which the proposal has been submitted.”

The changes unilaterally imposed are in contravention of the Amendment Procedures detailed above. Does this not invalidate these Charter changes/suspensions, on a moral, if not on a legal basis? Remarkably, we have discerned no lay participation in these changes. Depriving the laity of its historic and Orthodox role in Church Governance alienates the faithful and divides the Body of Christ.  Any new Charter must not only include wording on Amendment Procedures that require lay input, but must also forbid and control for any contravention to them. Any further overhanded disregard for the Charter may result in the new document having no meaning whatsoever.

Please accept these ideas on the new Charter in our shared belief that a full and open collaboration between clergy and laity is the cornerstone of our Orthodox Christian faith.

Following the initial exchange of letters, below is the continuing correspondence regarding the new Charter for the Greek Orthodox Archdiocese:

February 2, 2021
Presentation of the Lord in the Temple

The Orthodox Christian Laity (OCL) thanks you for your recent messages and we pray for your good health in these pandemic times.

We also appreciate the opportunity to share some of our ideas with you regarding the proposed new Charter for the Greek Orthodox Archdiocese of America. Having heard from many of our leaders, supporters and others on this issue, a common thread ties them together: the role of the laity in our Church has diminished, and this should be corrected so that Church governance regains a more balanced co-ministry between clergy and laity.
Comparing the role of the laity in the original Charter of 1922 with the succeeding Charters of 1927, 1931, 1977 and 2003, we see a steady and disturbing erosion of the laity’s role in Church governance.

The laity are co-responsible in Christ’s Church, along with the clergy (bishops, priests, deacons), no more, no less. Their role has diminished drastically over time from substantive, to advisory, to pro forma. This should not be the case in the Orthodox Church.

The new Charter for the Archdiocese should restore the historic role of the laity in the governance of the Church. The Charter and following Regulations should explicitly state the role of the laity in all administrative and financial matters, including independent and transparent auditing, while respecting the spiritual, hierarchical and conciliar nature of the Church.

The interdependency of clergy and laity should be at the core of the new Charter. The laity’s roles and responsibilities in administrative/ financial matters and in clergy nominations/elections should be clearly defined. Likewise, the spiritual and hierarchical roles and responsibilities of the clergy should be clearly set forth. Both should be scrupulously adhered to. The collaboration of clergy and laity should permeate the entire Charter.

We thank you for your attention and ask that you pray for OCL supporters, Orthodox Christians and all those suffering the ravages of the ongoing worldwide pandemic. 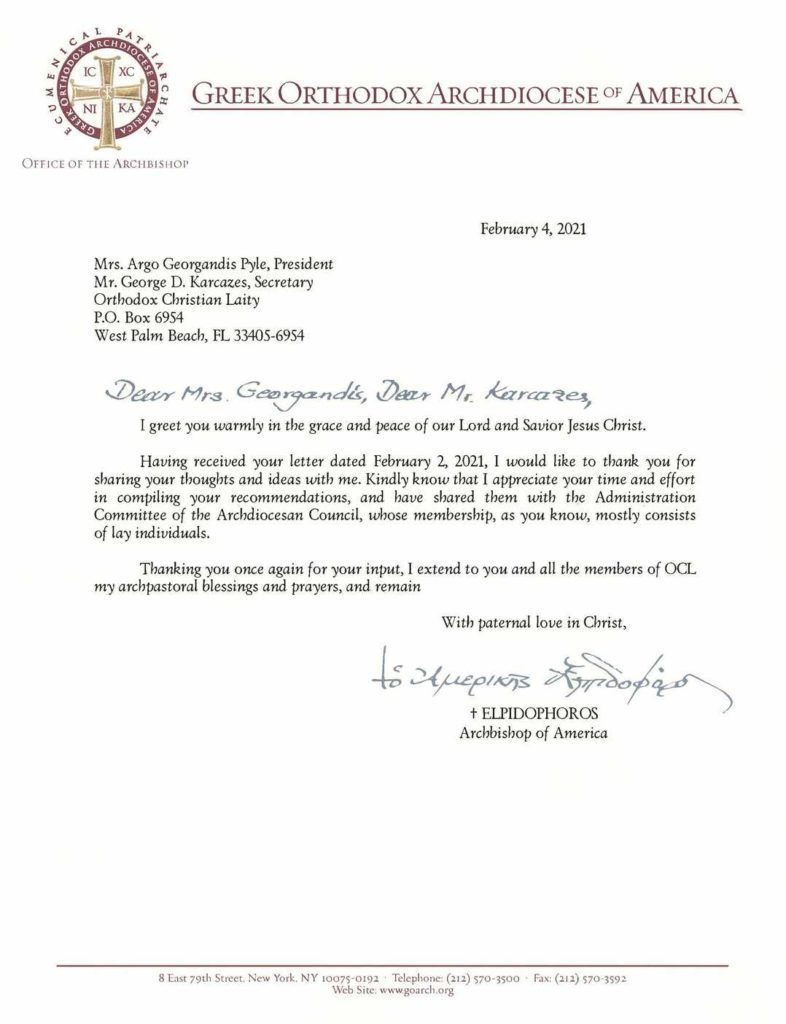 I greet you warmly in the grace and peace of our Lord and Savior Jesus Christ.

Having received your letter dated February 2, 2021, I would like.e to thank you for sharing your thoughts and ideas with me. Kindly know that I appreciate your time and effort in compiling your recommendations, and have shared them with the Administration Committee of the Archdiocesan Council, whose membership, as you k.now, mostly consists of lay individuals.

Thanking you once again for your input, I extend to you and all the members of OCL my archpastoral blessings and prayers, and remain

With paternal love in Christ,