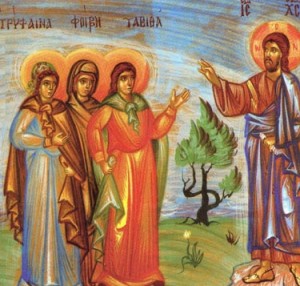 Orthodox Christian Concerns: A Lament for Our Millennial Daughters

What is best about the Orthodox Church—holding true to early teachings and traditions—also presents its greatest challenge: making sure tradition doesn’t trump appropriate treatment of others. While many prize the richness of the Orthodox Church, our traditions can lead to exclusion of some from fully participating in the community of Christ.  It’s a fine line, preserving ancient rites without marginalizing particular groups, within a patriarchal structure, and is ripe for discussion, particularly as it pertains to women.

Many Orthodox Christians immigrated to this country in the early 20th century, at a time when the United States experienced unprecedented social, economic, and technological change.  The last forty-five years have especially afforded women immense opportunities; the Orthodox Church, however, somewhat secluded from secular society, has been slow to distinguish between those customs or traditions that reflect Christ’s teachings and those that result merely in differential treatment of women and men.  As a result, Church culture treats women differently depending upon whether they are single/married, parenting/childless, or at-home/working.  By maintaining outdated assumptions about women as wife and mother, Church leaders have created a culture difficult for young women to reconcile, for they live secular, modern-day lives with expanded opportunities, but are diminished as Orthodox Christians.

Church leaders, most familiar with their ‘boomer’ moms and sisters, may be unaware of how radically different life is for a millennial young woman.  Unlike 3rd-generation Orthodox women, our daughters don’t have memories of grandparents settling in a new country, building bedrock church communities.  They don’t have, or crave, the ethnic glue that held communities together, but rather seek Churches that are not ethnocentric as they are fully integrated into present-day society. They graduate college having had equal access to social groups, athletics, and academics; they rock the boat, assume their place at the table, and are accustomed to being heard and being successful. Some describe these young women as aggressive, disrespectful, and unladylike; instead, why not regard them as talented, discerning, and energetic?

This shift has had a huge impact on work, marriage, and family choices.  Millennials delay marriage to pay off college loans before joining incomes. They seek relationships with people who affirm their passions and talents, which often result in blended religious marriages.  For those who marry, children are not a given, with an increasing number choosing to be childless; and some remain single, finding rewards in pursuing professional endeavors. Universally, these young women are in the workforce, in traditional and nontraditional ways:  some work part-time in hourly wage jobs, others run at-home businesses, while others climb corporate ladders, serve on boards and hold public office.

Our millennial daughters are celebrated in the workplace but diminished as parishioners in Orthodox Churches. For some, Orthodox traditions have scarred them as teenagers—they cried when they couldn’t serve alongside their brothers at the altar, might have sat bewildered if confined to sitting on one side of the Church, and felt marginalized if they weren’t allowed to read the epistle or sing with the chanters.

For them, in this modern time, it’s unimaginable that mere biology preempts full participation in Church alongside their brothers.   And this belittlement continues as they emerge into adult years as Church members.  Our daughters are ridiculed for the way they look. They might be told to put on a skirt, cover their shoulders, cover their heads and uncross their legs, and they question why these standards apply only to women.  They have been tapped on the shoulder in the communion line and asked if they are menstruating.  They are defined as a possible mate and offspring-bearer for the seminarian, an uncle, or a son.  And, they are told subtly and overtly, that only two meaningful life choices await them:  marriage or monastery.

Marriage and monastic living are indeed high callings, but not the only way for our daughters to live out their Christ-centered vocation. By solely defining them as mate and offspring-bearer puts them in a box and does not honor their potential contributions.  Our daughters are changing the world as lawyers, teachers, actresses, and scientists. The church needs to focus on what they are doing presently and see how their talents can be used in Church ministries. 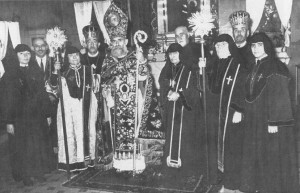 Sorting out what is tradition and what is cultural attitude about women’s place will be challenging for the Orthodox Church as an institution with only males at the top.  But that doesn’t mean it’s not doable.  There are ways to bring a diversity of ideas and life experiences to the top, and mitigate the “group think” attitudes about the role of women in the Church.   To start, Church Hierarchs could launch a public campaign to bring women into all aspects of administration and leadership positions at the parish, diocesan, and archdiocese board of trustees level.  They could expand training and employment opportunities for women to serve as outreach workers in missions, teaching and preaching.  Orthodox Chaplaincy continues to thrive and can be made stronger by blessing more women who are trained to function in this manner. And as discussed for decades, allowing girls to be altar servers in our Churches sends a strong message that their service is valued.  Furthermore, re-establishing the historical female diaconate increases their capacity to serve, and allows, among other things, for women-to-women pastoral counseling, a ministry that is still needed in our churches today.

“There is neither Jew nor Greek, there is neither slave nor free man, there is neither male nor female; for you are all one in Christ Jesus.” If we focus on Galatians 3:28, the Orthodox Church would align Church culture to Christ’s teachings, help the Church sort out what is tradition and what is a cultural attitude and ensure our young, talented women are fully engaged and participating as members of Christ’s Church without shame, marginalization or harassment.  Launching an effort to address these attitudes and bring women into administration and ministerial positions can re-shape culture, build up the Body of Christ and help young women find their spiritual home in the Orthodox Church.

Jennifer Nahas is the co-founder of Brigham Nahas Research Associates (BNRA), a Massachusetts firm specializing in evaluation research that promote success for young people in high school, college, and beyond.  She was the former Executive Director of Orthodox Christian Fellowship and is the proud mother of two millennials.