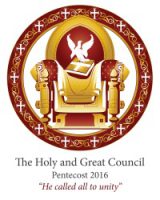 The budding fruits of the upcoming Holy and Great Council began forming when the “Messaging Committee” convened. Τhe Messaging Committee is a gathering that expresses faith in collective roots despite a rocky history, which stretches across hundreds of years and unimaginably diverse cultures.

The Orthodox Churches of the world are working together to unite perspectives of the Message, showing unprecedented collaboration by simply gathering to talk together at a table.

His Eminence Metropolitan George of Paphos presided over a Divine Liturgy at the Patriarchal and Stavropegial Monastery “Gonia”. This Liturgy ushered the committee into deliberations, which carried throughout the day.

The Messaging Committee will convene 9-16 June at the Orthodox Academy of Crete, in Kolymvari.

What is on the Holy and Great Council’s agenda? They are items that have been passionately and thoughtfully discussed for more than 40 years by many Orthodox Primates, but never as one church body.

How the Messaging Committee works

The Messaging Committee will draft a set of statements that will be considered by the Synaxis — or gathering — of the Primates as they work toward agreeing as a full Council.

The Message will impact the collective Orthodox Church community, and will also mark a historic milestone in the history of Christianity. As the Messaging Committee convenes, many of the world’s Autocephalous Orthodox Churches have expressed a need for solidarity. Together they face times of distress or conflict. Also, together, they face ideological challenges, spiritual confusion, social unrest, and stigma and discrimination that have led to persecution.

The Message of the Committee will show the capability of faith, and the fruit it could potentially bear in spite of a difficult context.

The Holy and Great Council will officially open June 20th at the Orthodox Academy of Crete in Greece.