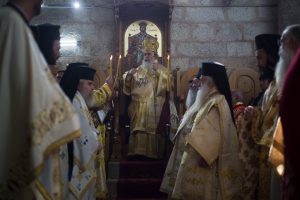 The Greek Orthodox patriarch of the Holy Land, Theophilos III, leads a procession to commemorate the bringing of the remains of the great martyr St. George to Lod, Israel, on Nov. 16, 2017. Dozens of Christian Arabs have protested, demanding the resignation of Theophilos III for allegedly selling church land to Israelis. (Ariel Schalit/Associated Press)

Beside a nondescript stretch of highway linking Bethlehem to Jerusalem, there’s a large shiny rock and a cluster of olive trees. This place, called Kathisma or “seat” in Greek, is said to be where the Virgin Mary rested and drank from a well, not long before giving birth in a stable to Jesus.

The only clue to that history is the ruins of a Byzantine church, with a vibrant mosaic floor peeking through mud and smashed beer bottles. And while the ruins themselves remain in the hands of the Greek Orthodox Church, all the surrounding East Jerusalem property has been leased by the church to an Israeli company, according to municipal records.

The Greek Orthodox Church, which serves as a custodian for many such Christian sites in Israel and the Palestinian territories, is coming under increasing criticism from its followers for repeatedly giving up control of its property through land sales or ­multi-decade leases.

The church’s practice of selling and leasing its properties has caused a split between its followers, who are overwhelmingly ­Arabic-speaking Palestinians, and the leadership, or Holy Synod, made up mostly of Greeks.

Local Christians say they fear that disposing of the land erodes their already shrinking presence in the Holy Land. And, they say, the Greek Orthodox Patriarchate has no right to sell or lease the properties in the first place. They claim it’s land that belongs to them, given by their ancestors to the church for safekeeping during turbulent times, though they offer no proof.

Over the past few months, church members have rallied in the West Bank and Jerusalem. They also have taken their campaign to social media and filed a lawsuit relating to some of the properties. Activists want the church to open its files and be more transparent. Some are calling for their leader, Patriarch Theophilos III of Jerusalem, to resign.

The tensions have forced Theophilos to seek support abroad. This month, he met with Russian President Vladimir Putin and before that with Pope Francis to give an accounting of the land deals and the growing complaints.

“A hundred years ago, there was no way for my grandfather to make this struggle against the church, but we’ve had enough. We want to fight back,” said Issa Rishmawi, a Greek Orthodox Palestinian from Beit Sahour, a town next to Bethlehem.

Residents of Beit Jala, another Christian-majority town near Bethlehem, sent a letter last week to the patriarch saying he would not be welcome at the town’s pre-Christmas celebrations this year. Rishmawi said that instead of sending Scout troops with drums and flags to the annual holiday parades, there would be protests.

The leadership of the Greek Orthodox Church has defended its management of the properties. It says in most cases it has leased the land to tenants rather than selling it, protecting the properties while at the same time earning revenue to sustain its religious mission.

“Everything we have done is with approval of the synod, but there are individuals who have their own agenda to attack us and slander us,” Theophilos said in an interview. “We are a religious institution with a spiritual mission here for more than 2,000 years.”

A document put together by the Orthodox Central Council shows that at least 20 tracts of land or properties were sold or leased in this manner over the past 10 years, garnering an estimated $101,114,285 for the church. Most of the identified properties are inside Israel, but several are in occupied territory — East Jerusalem or the West Bank. Aleef Sabbagh, a member of the council, said most of the buyers appeared to be Israeli or Jewish-owned companies.

The church members who object to the land sales say the church leadership has made secret deals with right-wing Israeli groups seeking to expand the Jewish presence in Palestinian areas or with investors more interested in making a profit than in preserving the integrity of the sites.

Critics of the land deals point, for example, to the Hill of Evil Counsel, said to be the spot where Jewish high priest Caiaphas betrayed Jesus, deciding to hand him over to the Romans for crucifixion.

The area is wild and abandoned, remarkable only for its breathtaking view of Jerusalem’s Old City. A tiny Byzantine church, with a few broken gravestones beside it, stands unkempt in one corner. Local monks believe this is the place where a 7th-century patriarch of Jerusalem, Modestus, a Greek Orthodox saint, is buried.

Ten years ago, the Greek Orthodox church leased the property, in West Jerusalem, to American Jewish philanthropist Michael Steinhardt and U.K.-based Israeli businessman David Sofer, according to property records. In recent months, Jerusalem’s city council approved plans to build a luxury housing complex on the site despite protests from local residents, a mixture of Arabs and Jews.

The law firm representing Steinhardt and Sofer in the development of the property did not respond to requests for comment.

Patriarch Theophilos said he has had no choice but to sell or lease land held by the church. He said he needs revenue to finance day-to-day church business in Israel and the Palestinian territories, as well as in Jordan and Qatar — all areas under his jurisdiction — and to pay off debts left over from bad real estate deals executed by his predecessors.

Regarding the transaction with Steinhardt and Sofer, Theophilos said it was done to protect the value of the property before the government could rezone it for another purpose.

The patriarch said he is now battling proposed Israeli legislation that would allow the Israeli government to confiscate some of the land under long-term lease. The legislation aims to protect residential neighborhoods that have been built on the property.

Theophilos also brought a court case seeking to retrieve two properties in the Old City’s Christian Quarter sold more than a decade ago by his predecessor Irenaios I to right-wing Jewish group Ateret Cohanim. A court ruled in August that the sale was valid and would not be voided.

“The patriarch is trying to make the narrative about religion and politics against Israel in order to calm their detractors,” said Fleur Hassan-Nahoum, leader of the opposition in Jerusalem’s city council.

“This story is truly about business interests and deals that have gone wrong, and others that have made very tidy profits for all sides both over and under the table,” she said.