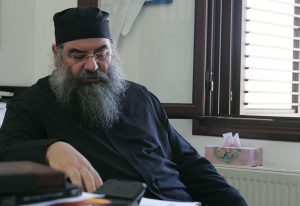 A proselytising bishop accused of leading a ‘recruitment ring’ to entrap the young has doubled the number of monks and nuns over the last two decades, a group representing parents furious that they have lost their children to the church claimed this week.

According to the Association of Friends and Relatives of Monks, there is now one monk per 1,000 people in Cyprus while monasteries have almost doubled since the early 1990s.

A member of the association, who wished to remain anonymous, told the Sunday Mail that according to the archbishopric’s own data, there are now 301 monastics – 159 nuns and 142 monks – compared to 141 in 1992. The number of monasteries and convents has also increased from 16 to 29.

Many parents of these monks and nuns allege that this increase was down to the proselytisation of youths studying in universities in Cyprus and Greece by a ‘recruitment ring’ led by Bishop Athanasios of Limassol.

“The problem began after 1992 when Athanasios – the current Bishop of Limassol – returned to Cyprus from the Vatopedi monastery on Mount Athos,” the source said. Athanasios at the time used to give a series of lectures on monasticism at the University of Cyprus.

“The increase of monks and nuns has been recorded in those monasteries which are under Athanasios’ spiritual guidance,” the source said. These include, he said, the monasteries of Machairas, of Timios Prodromos in Mesa Potamos and of Agios Georgios – Symvoulos tou Christou in Limassol. Athanasios, he said, is also the spiritual guide at the convents of Panayia Trikoukkia in Troodos and of Agios Herakleidios in the Nicosia district.

“Of course, we don’t believe that all monks were forced to enter monastic life,” he said.

He added, however, that the majority of those monks and nuns whose parents are members of the association had Athanasios as their confessor and spiritual guide.

“We have nothing against monasticism, nor would we object if our children had made the decision to enter monastic life of their own free will, but we believe that they were manipulated and forced into this,” he said.

He dismissed the abbots’ arguments that their children are adults and have the right to make their own decisions and are free to leave whenever they want.

“So, they are free to decide for themselves, but they – abbots – do not let them do that, they indoctrinate them into entering monasticism,” he said.

Neither is it easy for a monk to leave monastic life as while at the monastery –  “they are held by psychological constraints, invisible, but very powerful”.

Once they take their vows as monks, he said, according to church rules, this is for life. “If they decide to leave, they are told they will have betrayed Jesus, or that they have been influenced by Satan. They are kept there by fear, guilt and shame,” he said.

The Sunday Mail was unable to reach the Bishop of Limassol for comment but he has previously admitted that he has encouraged youth to enter monastic life. With thousands getting married each year, he reasoned, what did it matter if ten became monks or nuns?

So concerned have the relatives association become that members have called on experts – human rights lawyers, theologians, psychologists – to look into the case “to shed light on the truth”.

“We also want to warn parents to be vigilant and monitor any changes in the behaviour of their children, as there is a recruitment ring in universities. They are few – mainly confessors – but very effective,” the group member said.

Among the changes parents must be aware of is if their children start going to confession, change their friends, distance themselves from the family, and stop going out to bars and start going to church.

Parents have also asked the help of the government – including the president, the attorney-general, the justice minister and the archbishop himself – but with no results.

Three court cases are currently pending, filed by parents against the government for failing to help, and against Bishop Athanasios.

The first case, which is the first-of-its kind lawsuit, is now being heard before Nicosia district court. A young man’s family is seeking general damages of up to €2m in a suit against Machairas monastery in Limassol, Bishop Athanasios, the archbishop in his capacity as the head of the church and the government.

A second case is expected to commence in March, while a third one was filed a month ago.

Not all families have opposed their children entering a monastery.

Following the publicity of the trial, another group also consisting of families whose relatives have become monks, have publicly defended monastic life and said they were saddened by the lawsuit, saying it appeared to be driven by a misperception of monastic life, or an attempt to denigrate the church.

The Association for Relatives of Cypriot Orthodox monks – composed of 170 families who have sons living in 46 monasteries in Cyprus, Greece, Mount Athos, Jerusalem, UK, France and the US – said they respected the decision of their children to join the church and stood beside them.

FROM MALE MODEL TO MONK

Last week the story of a former male model-barman who became a monk was all over social media, following a post on a blog about a small monastery in Troodos – Timios Prodromos dedicated to Saint John the Baptist – where he now lives.

According to taxidiaris.blogspot.com.cy, the now 45-year-old monk Nyfon – birthname Menelaos Michaelides –  had won a Cyprus male beauty contest in 1995 when he was 25. He had also participated in the Manhunt International male contest in Thailand.

Nyfon is now – along with six other monks – working to maintain the complex of their monastery located on the southern slopes of Troodos.

According to reports, Menelaos, who was also a barman at Versus, one of the capital’s most popular bars of the time, had attended Bishop Athanasios’ lectures at the University of Cyprus when he decided to become a monk.

He told the blogger that because his decision was so unusual and different, others found it hard to understand.

“For years, my parents would not accept it,” Nyfon said. “But it was a conscious choice driven by an inner need.”

Related Stories
Orthodox Christian Fundamentalism: what is it and does it exist? – Greek Orthodox Archdiocese blog / Ancient Faith Radio