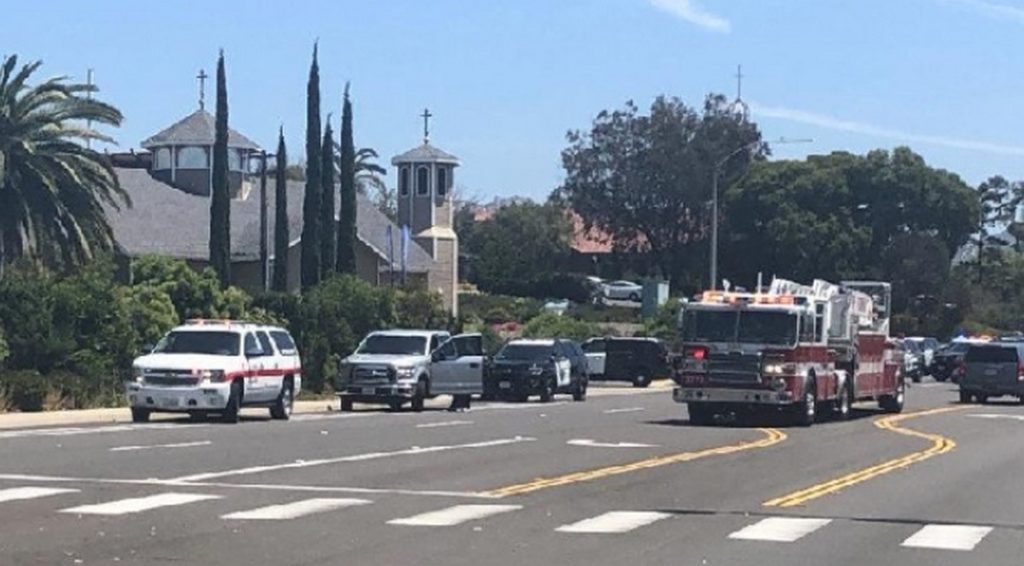 St John of Damascus Orthodox Church next to the Chabad Synagogue

Saint John’s located next to the Chabad Synagogue that was attacked on that day.

“We had just finished the prophecies and the choir was in the middle of the church, finishing the canticle,” Father Alexander explained.  “I stopped the service and told parishioners to call 911 and then went to the back of the church to see what was happening.  I decided there was nothing we could do but continue to pray.  Several folks were on the phone with the 911 dispatch asking detailed questions.”

Several parishioners stationed themselves around the inside parameter of the church.

“It was difficult to concentrate, but we finished the Liturgy, receiving Communion,” Father Alexander said.  “Near the end of the service, I asked one of our parishioners who is a former County Sheriff to see if he could find out what happened.  And that’s when we learned that three people were shot, including the Rabbi, at the Chabad Synagogue.”

At the end of the service, the displaced Jewish worshipers were standing around outside the church. “We invited them into our hall for water and refreshments, which were limited because all we had was leavened bread,” Father Alexander reported.  “One lady commented that they had eight more hours of fasting.

“Our Jewish neighbors and our 78 parishioners who attended the Holy Saturday Vesperal Liturgy were detained until 3:30 p.m. before anyone was permitted to leave,” Father Alexander continued.  “Everyone had to give their name, address, phone number and ID to an officer before they could leave. Many of the law enforcement personal were so appreciative to be able to use our facilities—after all, the synagogue was a crime scene.”

Word quickly spread that Espola Road would be closed until noon on Pascha morning.

“I went out at 6:00 a.m. to talk to whoever was in charge to let them know we canceled midnight services and that this Sunday was our Easter,” Father Alexander said.  “Any other Sunday we could have canceled the Sunday Liturgy and encouraged parishioners to go to other Orthodox churches.  It was a miracle that Espola Road was open before our scheduled 10:00 a.m. Paschal Liturgy.

“The media kept showing beautiful photos of our church, and it was comical that one reporter finally asked, ‘since when does a synagogue have a cross on it?’” Father Alexander related.  “Our church was on the New York Times website, Associated Press, NBC, ABC, CBS and other local channels, and I was interviewed twice on Sunday morning.”

The best statement of the day, said Father Alexander, was “This is the day that the Lord has made.”

“On an ordinary Saturday morning, we probably would not have been in church; we would not have been around to offer Christian hospitality to our neighbors,” Father Alexander added.  “Many people have commented on the anti-semitism of this attack.  Thankfully, we were not victims, but many of our faithful were traumatized as the attack absolutely affected our community.”

Upon learning of the Chabad attack, His Beatitude, Metropolitan Tikhon attempted to contact Father Alexander, but calls were not going through.  On Bright Monday, he was able to connect with the parish and offered words of support.

“Christ is risen and overcame the devil, who is the source of all these recent acts of violence!” Father Alexander concluded.

A video link from NBC is available for viewing.

Share. Twitter Facebook Pinterest LinkedIn Tumblr Email
Previous ArticleIt’s Time for a Serious Conversation about the School of Theology
Next Article Musings of the Executive Director: The Time for an Autocephalous USA Orthodox Christian Church is NOW!