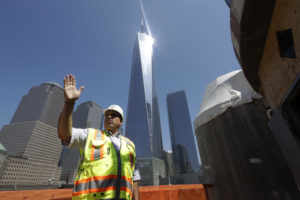 In this Aug. 10, 2017 photo, Jerry Dimitriou, executive director of the Greek Orthodox Archdiocese of America, describes the construction progress at the St. Nicholas National Shrine in New York. The Greek Orthodox church, taking shape across from the World Trade Center memorial plaza, will glow at night like a marble beacon when it opens sometime next year. It also will mark another step in the long rebuilding of New York’s ground zero. (AP Photo/Mark Lennihan)

PITTSBURGH – A preliminary report about the investigation of St. Nicholas issue was given at the spring meeting of the Archdiocesan Council in Pittsburgh, according to a News Release issued by the Archdiocese.

Specifically, the News Release has as follows: On May 4, 2018, Elaine Allen, Chairman of the Standing Audit Committee of the Archdiocesan Council, of the Greek Orthodox Archdiocese of America, announced the substantial completion of Phase 1 of the St. Nicholas Special Investigative Committee’s (SIC) investigation into the management and finances of the St. Nicholas Church and National Shrine project. The SIC has received PricewaterhouseCoopers’ (PwC) Phase 1 draft report and is expected to announce its findings to the Executive Committee of the Archdiocesan Council imminently.

Among key findings from Phase 1, the amount owed by the Archdiocese to St. Nicholas has been confirmed to be less than $3.7 million, with the exact dollar figure to be finalized in the coming weeks. Moreover, the review found that all other monies raised to fund the St. Nicholas project are accounted for, and that the expenditure of these funds was consistent with donor restrictions.

As a result of the aggressive financial restructuring efforts undertaken by the Archdiocese over the last year, led by Treasurer Mike Psaros, the Archdiocese has already repaid $1million of the pending total amount it owes to St. Nicholas, and will voluntarily pay interest on the full amount owed to the project. The Archdiocese will also make a voluntary contribution of $670,000 to St. Nicholas. This amount represents the full amount of unrestricted investment returns generated on donations from 2001 – 2012.

Phase 2 of the SIC’s investigation is also being conducted by PwC. The work is ongoing and includes a review of the St. Nicholas project’s baseline costs and cost increases, a review of design changes, and an analysis of vendor payments with the goal of identifying potential non-disclosed relationships between the St. Nicholas project management team and vendors paid with St. Nicholas funds. The SIC’s findings report is expected to complete within one month.

Immediately following the completion of Phase 2, Phase 3 of the SIC’s investigation will begin. It will largely be a project management and design exercise intended to finalize construction plans, costs, and a revised timeline for completion of the project.

The SIC is committed to completing its comprehensive and exhaustive investigation into mismanagement allegations around the St. Nicholas project, and to addressing all issues potentially raised in this investigation before construction proceeds.

The St. Nicholas Church will be a sacred space with its doors open to all. As a National Shrine on hallowed ground, it will stand in memorial to the lives lost on September 11, 2001, as a symbol of reconciliation, and as a spiritual beacon of hope and for generations to come. The Archdiocese remains committed to the completion of this deeply meaningful landmark and spiritual capstone to the World Trade Center site redevelopment effort.