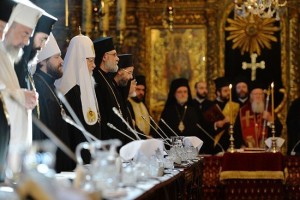 Moscow, December 28, Interfax – The chairman of the Synodal Department for External Church Relations Metropolitan Hilarion of Volokolamsk has been cautious about prospects for convening a Pan-Orthodox Council.

At the same time the hierarch stressed that the Russian Church has always participated and continues being most actively involved in the pre-Council process, “despite the obvious difficulties in the preparations for the Pan-Orthodox Council.”

“As for specific dates of the event, I think it is too soon to talk about them,” the hierarch said.

No Pan-Orthodox Council has been convened in more than a thousand years, and preparations to conduct one have been held for half a century now.

In 2014, the leaders of the Orthodox Churches agreed to convene a Pan-Orthodox Council in Istanbul in 2016, “unless prevented by unexpected circumstances.”

“It was expected that in the remaining two years it will be possible to redact, and in certain cases, entirely re-write a significant portion of the Council’s draft documents, many of which have become obsolete despite being drafted about 30 years ago,” Metropolitan Hilarion said.

Progress in reviewing the documents was extremely slow, “as a result, of the eight topics that were expected to be put to the Council, only three have been agreed upon to date, work on the rest has never been completed,” Metropolitan Hilarion said.

“So far there is no unanimous understanding among the Orthodox Churches as to the rules under which the Pan-Orthodox Council should operate and what its regulations should be. An ad hoc inter-Orthodox commission which met recently to discuss these issues had to interrupt its work after failing to reach consensus. Many of the issues, concerning preparations for the Council, which were raised repeatedly by Most Holy Patriarch Kirill in his letters to Most Holy Patriarch Bartholomew of Constantinople last year, have remained without answer to this day,” Metropolitan Hilarion said.