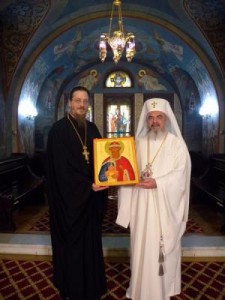 YONKERS, NY [SVOTS/OCA] At the invitation of His Eminence, Archbishop Nicolae of the Romanian Orthodox Archdiocese in the Americas, Archpriest Dr. John Behr, Dean of Saint Vladimir’s Seminary here, traveled to Bucharest to sign a cooperative agreement between Saint Vladimir’s and the Faculty of Orthodox Theology, University of Bucharest. His visit, blessed by His Beatitude, Patiarch Daniel, began on the Sunday of the Publican and the Pharisee when he celebrated the Divine Liturgy in Bucharest’s Patriarchal Cathedral of Saints Constantine and Helen.

On Sunday afternoon, Patriarch Daniel hosted Archbishop Nicolae and Father John for an extended meeting at the Patriarchal Residence, during which Father John presented the Patriarch with several SVS Press books and an icon of Saint Vladimir. Father John expressed his gratitude to the Patriarch for having blessed the project between the two schools of theology in New York and Bucharest.

“I’m gratified to see that our plans for partnering with overseas schools is bearing fruit,” said Father John. “Through these collaborative efforts we will be able to serve the various Orthodox churches in the United States more effectively by enriching the formation of our students, and we will lay the groundwork for ongoing and sustained dialogue with Orthodox schools of theology overseas.”

The agreement with the University of Bucharest’s Faculty of Orthodox Theology is the second one to be formalized this winter. On February 12, 2013, Father John and the seminary’s Chancellor/CEO, Archpriest Dr. Chad Hatfield, signed a formal agreement with the Faculty of Orthodox Theology at the University of Belgrade to establish a Serbian House of Studies at Saint Vladimir’s Seminary. [See related story].

While in Romania, Father John led a conference for faculty and students in the University’s Great Hall, centered on the topic “Becoming Human,” the theme of his soon–to–be–released SVS Press book. He also met with Theology Faculty Dean, Archpriest Dr. Stefan Buchiu, and other faculty members, at which time the document outlining the cooperative agreement was signed.

“In the USA, the Orthodox faith is two centuries old, and the Orthodox faithful come from all over the world, from Romania, Russia, Bulgaria, Serbia, Middle East, so that we all live together,” noted Father John in his remarks during Sunday’s Divine Liturgy. “Living together with various nations, traditions and cultures, our place is a very special one which encourages the experience of the Orthodox faith.

“We are all pilgrims in this world, as one of the fathers of the second century used to say,” added Father John. “This same early Christian sent a letter to Diogenes in which he said of all Christians, ‘any foreign country is their homeland and any homeland is a foreign country for them.’ I am in a foreign country, but I feel as if I am at home in my own country.”