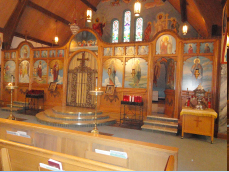 JOBS – JOBS – AND MORE JOBS:  While many Arabs are facing discrimination, job losses, harassment and racial profiling in many communities throughout the United States, one American City is bucking the trend and encouraging Arabic Families to move to their city with the promise of potential jobs, cultural recognition and a better family life.

It’s a lot to promise but lifelong residents of Sioux City, Iowa believe that Arabs will respond positively to their initiative to whole heartedly welcome Arabic Families now living in large American Cities and those emigrating from the Middle East.

The relocation initiative is being led by members of St. Thomas Orthodox Church in Sioux City which, according to Church activist Nick Corey, has an enthusiastic, welcoming spirit that Arabic immigrants to Sioux City will find comforting.

“We are excited at the prospect of more Arabic Families coming to our city. Obviously, we are a Christian parish, but that Christian spirit has arms wide open for anyone who wishes to relocate to our community and build a new life,” Corey explained.

“Siouxland has jobs. We have a cultural appreciation for Arabic culture. And we have the strength and love of Arabic culture to offer a genuine welcome to all Arabic Families who decide to leave the troubles behind and settle in a region that wants them.”

Corey cited the many assets of Sioux City, including the accolades it has received from major national publications and media.

Sioux City was recently named by Money Magazine as one of the nation’s “Best Places To Live.” Forbes Magazine has listed the Sioux City metro area as among the “Top 15 Best Small Places for Businesses and Careers.” MSN.com recently ranked the metropolitan area as the Number 2 “Most Livable Bargain Market” in the country.

Corey said that St. Thomas Orthodox Church is a parish of The Antiochian Orthodox Christian Archdiocese of North America program which has spearheaded outreach to Arabic Families in the Middle East and in countries where many Arabic Families have faced relentless discrimination, rejection, and violence.

St. Thomas Orthodox Church is a testament to the resolve of Arabic settlers who endured extreme hardships immigrating to America and then to the Siouxland region at the beginning of the 20th Century.

“St. Thomas Orthodox Church was founded in 1916 as a parish to serve the needs of Arabic immigrants in Sioux City. From its earliest days, church leaders recognized that in order to be faithful to Christ, the parish needed to find a way to share more of the Light of Holy Orthodoxy to the surrounding community. As a result, St. Thomas was one of the earliest parishes in the Antiochian Archdiocese to utilize English in Sunday Worship.”

Corey notes that the Arabic Christian community is rich in culture but has strongly adapted to American life, assimilating without losing their identity.

“We’re proud of our Middle East heritage,” Corey said. “But we recognize that the community here is also changing. Most of our members don’t speak Arabic any more. The welcoming and loving spirit of our forefathers, however, is alive and well in the Arabic community of Sioux City.”

Corey said the region is acquainted with many ethnic immigrants who also call the region their home including people of Russian, Serbian and Romanian peoples as well as many others who pride themselves in American heritage.

“St. Thomas Orthodox Church is a vibrant, God-worshiping community of Christians who proclaim the transforming message of Jesus Christ to all of Siouxland,” the Church website boasts.

“A fixture of Sioux City religious life, our parish is known to many by its popular Lebanese Dinners, its participation in local charities, and its active liturgical life.  As Eastern Orthodox Christians, we embrace the truths handed down to us from the Apostles.  As Sioux Citians, we are committed to bringing the Light of Christ in Orthodox Christianity to all of our community.”

Corey said that St. Thomas Orthodox Church welcomes all Arabic Families and Christians of every nationality!

He said the appeal is based on the availability of jobs.

“We have jobs available in all industries,” Corey explained. “I think people might be tired of the long commuter rides between work and home. Here, they’ll find the jobs nearby. Our church is rolling up its sleeves to assist Arabic settlers find new homes and also to find jobs. We want Arabic Families to come here and make this their home. We love it here. We love the Arabic culture. We believe this is the American dream that everyone should have.”

“The Siouxland metropolitan region consistently has ranked first in the nation for economic development, “Corey said. “And for the 4th time, Siouxland recently ranked first in the nation by Site Selection Magazine for 2013 best locations, based on qualified economic development projects for communities with populations between 50,000 and 200,000 people.”

“Siouxland is the place to be”, Corey said.

With a combined population of 165,000 plus, Siouxland is a Tri-State region merged into one community cooperating across geographic lines in economic development, planning, marketing, education and legislative issues.

“It has many of the amenities of a big town with the quality of life of a small town, cozy and friendly community,” Corey said.

Corey said that distance & proximity of the area is all relevant and features that will appeal to new immigrants.   “A typical drive to work, if you lived in Iowa and worked in Nebraska, might take about 15 minutes in heavy traffic,” he said. “There’s no bumper-to-bumper traffic or hour long commutes in Siouxland. We have a great public transit system but most people own their own vehicles.”

Some of the companies looking to hire include CF Industries, a global leader in the manufacture and distribution of nitrogen and phosphate fertilizers. It has approximately 1,500 construction jobs to fill.

J&L Enterprises has nearly 400 positions to fill in the Siouxland area, and Knife River Midwest has over 40 jobs for laborers, drivers, finishers, equipment operators and plant operators.

Argosy Casino and WinnaVegas Casino have openings available, too, Corey pointed out.

“No matter what your trade or skill, from laborers to skilled tradesman, there is an opportunity for you in Sioux City, Iowa. Even the local post office is hiring in Sioux City.”

The Sioux City Journal recently held a career expo for over 20 employers looking for new employees skilled in every line of work.

Sioux City, Iowa recently was named Number 1 in availability of affordable home pricing.  “You can still buy a comfortable two-bedroom home in the area for about $65,000” Corey said. “Rents for a two-bedroom apartment start between $400 and $500. Three or four bedroom homes might rent for $600 to $800.”

Corey said the region has a strong retail base, a great restaurant based nightlife and a solid education system for young people.

The tri-state Siouxland community offers a strong academic program of studies with varied exploratory and co-curricular courses.  The February 11, 2014 issue of Education Week Magazine rated Iowa 10th in the Nation based upon student success rates. Siouxland students consistently rank at or above state and national averages on standardized tests.  The area boosts several new schools built in the last 6 years.

Siouxland residents – whatever their age or academic level – enjoy an impressive array of options for primary, secondary, post-secondary, and continuing education

The homey nature of Sioux City offers a local sports network that is geared towards families.

Siouxland offers golf enthusiasts an opportunity to enhance their skills and enjoy their favorite sport on our many great public and private golf courses including an Arnold Palmer Signature Course, which has hosted the PGA tour and has been named “Best in America” by Golf Week.

There is an abundance of outdoor sporting, too. Great fishing and hunting exists in the Siouxland area. Major rivers and lakes in the Siouxland area including the Missouri River, Big Sioux River, Little Sioux River, Brown’s Lake, Crystal Cove, Blue Lake, Snyder Bend Lake and McCook Lake offer great fishing and our rolling hills are a hunters paradise.

Siouxland offers over 50 park sites & hiking trails equipped with great shelters for those great family picnics, or enjoy a cool dip in one of our newer swimming pools.

The Sioux City Community Theatre has provided quality, live theatrical productions in Siouxland since 1948.   The Sioux City Symphony Orchestra has been a dominant force in the cultural life of Sioux City and the surrounding tri-state area.

“To get started, all they have to do is call us. We want them here and we know that once they come here, they will never want to go back,” Corey said.

For more information, you can email Corey and St. Thomas Orthodox Church at [email protected].