[ditty_news_ticker id="27897"] Sister Nectaria: The Only Greek in Kolkata Is Mother to Thousands [Just in time for Mother's Day] - Orthodox Christian Laity 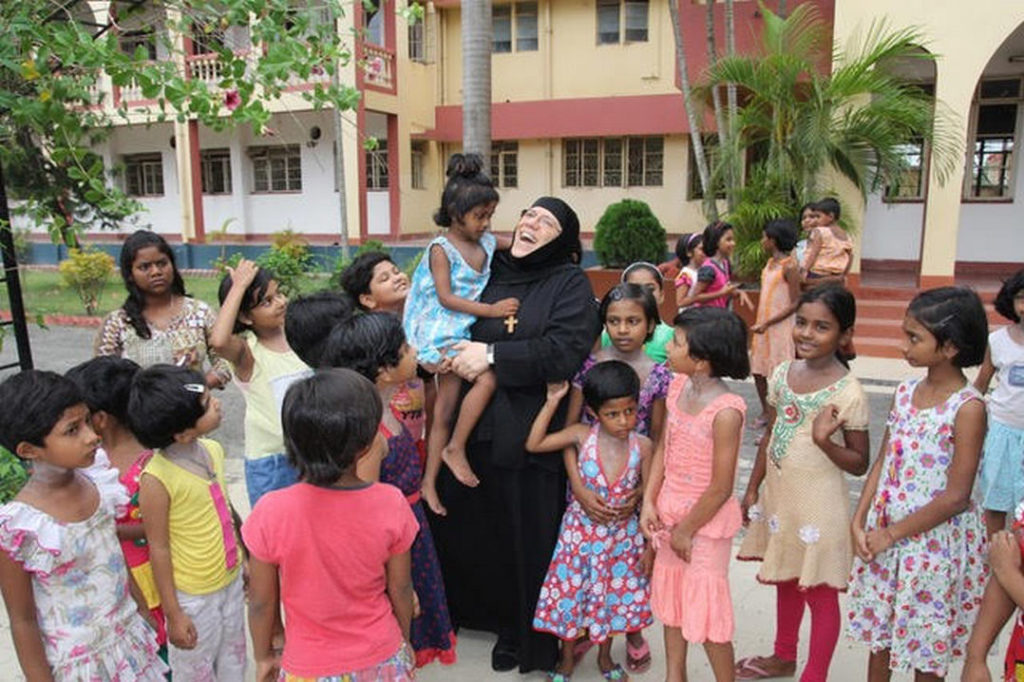 A Greek Orthodox nun in Kolkata (formerly Calcutta), India has become a symbol of the eternal fight against poverty, illiteracy, child trafficking and prostitution in the city.

Sister Nectaria Paridisi, by most accounts the only Greek individual left in Kolkata, through the schools and orphanages she built with the help of donors has become a “mother” for thousands of children, offering them the prospect of a new and better life.

She works in Bakeswar on the southern reaches of the city, where she is in charge of two orphanages which are owned by the Greek Orthodox Church. 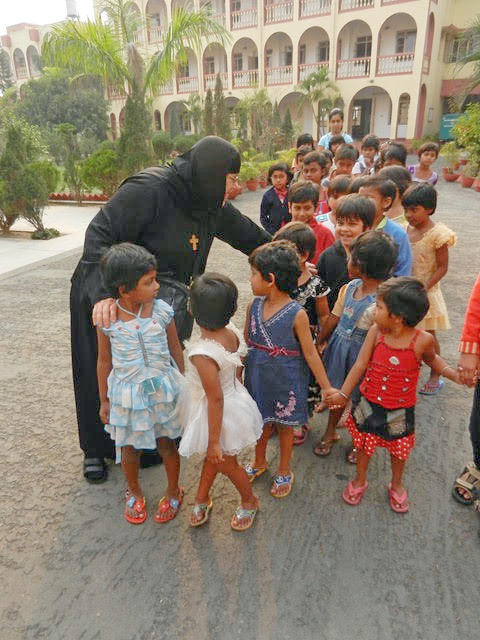 “Since 1999, when the first orphanage was established, hundreds of … orphaned, abandoned, homeless children found a warm home here. They found affection and love. That’s what they need most,” Sister Nectaria told the Greek Reporter recently.

Originally from Corinth, the nun first arrived in Kolkata in 1991 in order to establish an Orthodox mission in the Indian state of West Bengal.

“Life in Kolkata is hard for any foreigner. But when we go to any mission, we don’t go for a holiday,” she declares.

According to the 2011 Indian census, Kolkata has a population of 14.1 million, making it the third-most populous metropolitan area in India.

Poverty is still rife there, Sister Nectaria says. “A million sleep in the street, children are begging instead of studying, young children are forced into hard work that only adults can do.”

Through devotion and hard work, she has established her orphanages as well as five schools, some in remote villages in West Bengal. 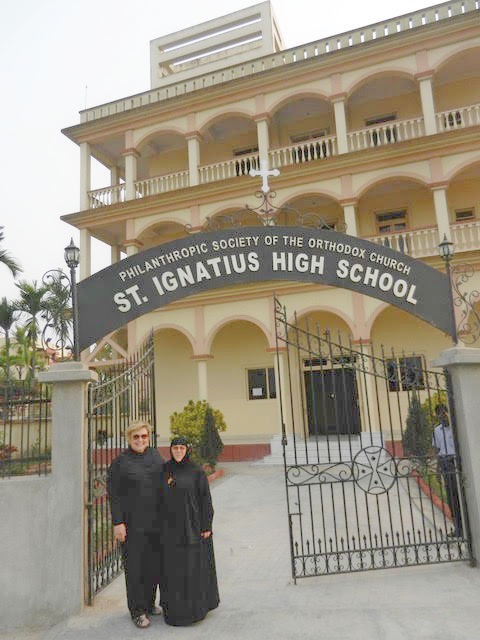 “Kids, especially girls, get very good education, and they start having dreams about their lives,” Sister Nectaria notes.

She says that girls are especially vulnerable in the Indian mega-city. “They are being forced to marry to older men… Their families want to get rid of them. They consider them as a burden. The best education is only given to boys.”

She admits it’s hard to change the male-dominated mentality: “Our work is a drop in the ocean,” she concedes.

Quoting Mother Theresa, now known as Saint Teresa of Kolkata, she says: “Everybody cannot do great works, but everybody can do little things with great love.”

Every morning, homeless children go to the school and the orphanages, where they receive milk and biscuits for breakfast. “For some,” the nun says,  “this is the only meal of the day.” 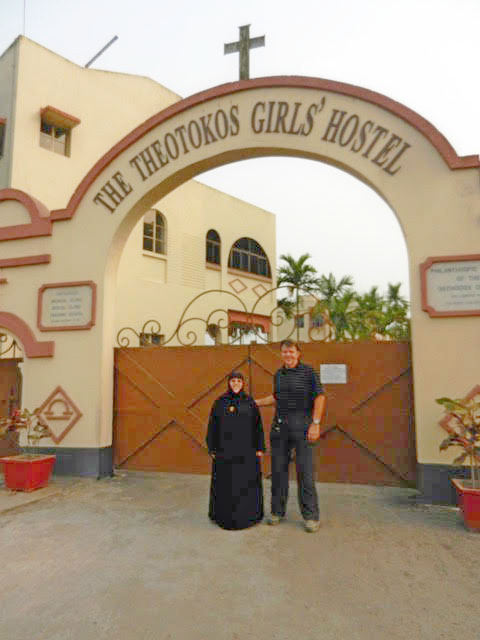 The needs of her ever-expanding mission are enormous. A new building is planned to accommodate more children and provide care and basic education for the destitute children. Financial assistance is urgently needed now, says Sister Nectaria.

“God brought a weak woman here to India to take on this enormous project because from within our weakness, the power of God is revealed,” she explains.

A Greek cemetery with more than 200 graves is still in existence today. Most of the gravestones have inscriptions in Greek. One reads: “In the memory of Mavrody Athanass Mitchoo who died on December 9, 1855.”

The oldest grave is that of Alexander Argeery, who died on August 5, 1777. Argeery was the founder of the first Orthodox church in Kolkata.

Another historic Orthodox church, the “Transfiguration of the Savior”, was built in the Kalighat area. However, with the gradual exodus of the Greek populace from the city, the church became non-functional, and was finally closed in 1972. 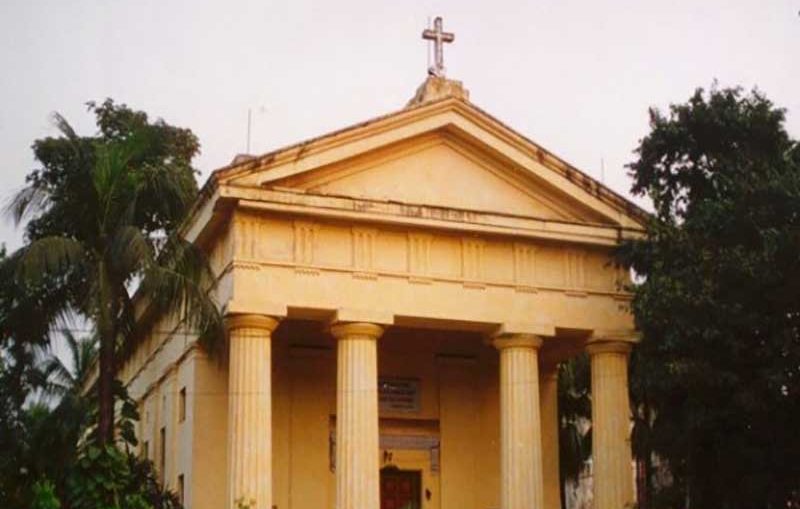 Transfiguration of the Savior Orthodox Church

In 1991, the beautiful Doric-columned church was reopened on the initiative of the Greek embassy. Sister Nectaria, who at that time was posted to South Korea, was asked to come and take care of the church. Father Ignatios, the priest in charge of the Transfiguration church, also established a charitable fund called “The Philanthropic Society of the Orthodox Church”.

But sadly, by now Kolkata has for all intents and purposes been emptied of its Greek populace. The church is frequented by local Christians, however, and Sunday services are held regularly in the Bengali language.

Watch the documentary Ekota, produced by HG Productions, co-directed by Michael Grant and Stephanie Grant and produced by Anna Yallourakis on the work of Sister Nectaria.

You can send funds to the school and orphanage via the donate link at the film producers’ website or at the official website of the The Philanthropic Society of the Orthodox Church in India.

Share. Twitter Facebook Pinterest LinkedIn Tumblr Email
Previous ArticleA message for those gathering in Atlanta at this time of crisis and transition in the Greek Orthodox Archdiocese of America
Next Article Resolution of the GOA Archdiocesan Council Meeting in Atlanta