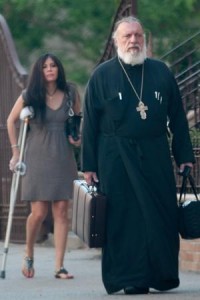 NEW YORK – Efstathios Papadatos, Parish Council President of St. Spyridon Church, has angrily taken issue with a New York Post article that suggested there were possible financial improprieties and that head priest Father George Passias, 65, was unusually close with his “spiritual goddaughter,” Ethel Bouzalas, 43, who had taken positions of responsibility.

The Post wrote that “the duo’s arrival in 2006 has blown in a storm of controversy. Critics ask how hundreds of thousands of dollars have been spent and why the Wadsworth Avenue church needs a $3.5 million mortgage. Complaints about its finances have been made to the state attorney general and Manhattan DA. The AG’s Office said it was reviewing them. The DA’s Office declined to comment.”

Papadatos called the piece “perfidious” and charged it was “replete with slander, innuendo, and a convenient manipulation of the facts involving an organization that has blossomed over the last few years to become financially sound and continues its mission to its parish and its community.”

In a letter, he wrote that the parish and its organizations follow carefully the uniform parish regulations of the Greek Orthodox Archdiocese of America, and functions in compliance with the Religious Corporation Acts of the state of New York.

He said all financial decisions go before the council of 15 members, including the Treasurer – Ethel Bouzalas – and Assistant Treasurer Savva Demoleas for review and scrutiny.

The Post, however, said that once Passias and Bouzas came in that financial overseers were removed, and Bouzalas became a signatory on church bank accounts. The firm that managed the church’s four apartment buildings, worth $15 million, was replaced with one tied to Alma Bank, the paper said.

It added that the Church also turned to Alma Bank for cash and a mortgage refinance totaling $2.5 million in 2009. Renovations on the apartments have been done by two companies tied to the principals at Alma Bank.

When the story appeared, Papadatos called the allegations against Passias “lies.” The Post added that after complaints to the Archdiocese, auditors examined Church finances and concluded in a March 2013 report that “someone other than Ethel” should approve payments. An Archdiocese rep said it was reviewing the Church’s mortgage request.

Papadatos, however, said that every item is discussed and those that require a vote are approved by a majority vote. Issues such as mortgages and the annual budget are presented and voted upon twice a year at meetings where the entire parish membership is invited.

He said that items not included in the annual budget must be brought to the general assembly for their approval. At the last general assembly meeting the proposed $3.5 million mortgage was presented, discussed, and voted upon with only one dissenting vote.

He added that the Church had a forensic audit conducted by Cohen Greve & Company under the direction of the Greek Orthodox Archdiocese of America. “The auditors found no nefarious acts or malfeasance regarding the finances of the church and school,” he said.

The lengthy rebuttal of the story said that the Church was in disrepair and about to lose all its real estate holdings until Passias took over six years ago. “Shamelessly, there was a brothel in one of the buildings,” he said, which led to Alma Realty being brought in to manage them, saying that’s why the financial overseers were removed.

He said the problems have been corrected and rent collections have increased from $664,000 to $1 million annually. He also said it was the council itself which asked for assistance from the Manhattan DA’s office. He said the Church is “eternally grateful” to Passias and Bouzalas.

The Post intimated that Passias and Bouzalas were inseparable. Both are married. Bouzalas lives in Brooklyn with her husband and three children.

“I walk out one night and his so-called assistant was sitting on his lap in his office,” said Harry Torres, a former Church handyman and superintendent for its apartment buildings.

After Bouzalas became principal, Passias moved his office from the Church to the school. As the Church was falling apart, money poured into school renovations. There are marble finishes in Passias’ and Bouzalas’ offices.

Eyebrows were raised at the church, where Passias has imposed a dress code requiring women to wear head shawls in confession. In no time, Bouzalas had prominent roles at the Church, becoming its treasurer and named volunteer principal at its school.