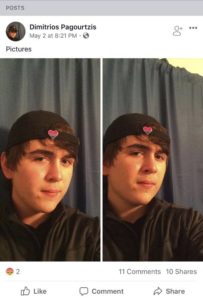 This undated photo from Facebook shows Dimitrios Pagourtzis, who law enforcement officials have taken into custody and identified as the suspect in the deadly school shooting Friday, May 18, 2018, in Santa Fe, Texas, near Houston. (Facebook via AP)

In the small central Greek village where the father of Texas teen high shooter Dimitris Pagourtzis was born, and still visits annually, there was disbelief the youth had conducted a massacre of fellow students, killing nine and a teacher.

The shooting at the Santa Fe high school was the fourth deadliest mass shooting at a public school in what has become so common that this year they are happening almost monthly, each time raising new fears and with a common denominator of someone seeking vengeance for a slight.

The family were “quiet, peaceable people” who didn’t seem out of place and showed signs of a good upbringing, residents of Magoulitsa told the news agency Reuters.

Antonios Pagourtzis left the village in his mid-20’s to go to the United States but regularly returned in the summer and runs local a business selling agricultural machinery, one resident acquainted with him said.

The family were “peaceable people, focused on work, business-minded,” he said, asking not to be identified. “He never caused trouble,” he said of the father.

Dimitrios rarely visited the village – residents said they saw him either last summer or the summer before – but those who did say he was quiet and did not show signs of unusual behavior.
“In my eyes, they showed good upbringing,” another long-time resident said, also requesting anonymity. “I saw them around. They were good people.”

“We’re lost for words. We did not expect this,” said Costas Spanos, president of the Magoulitsa community, a tiny village in central Greece with just over 500 residents where his father, Antonios Pagourtzis, was born. “We’re in shock. We’re a small community and this makes us look very bad,” he told Reuters over the telephone.

Meanwhile, a picture emerged of the teen killer as a quiet loner obsessed with guns who reportedly had been snubbed by a female student he wanted to date and who reportedly belittled him in class when he got too aggressive in his advances.

Photographs posted on the Facebook page of the Greek Orthodox Church in Galveston pictured him dancing with other costumed performers in other social media and journal posts showed he was obsessed with guns.

A Facebook post on April 30 that has since been taken down showed a black T-shirt with the words “Born to Kill” printed in white.

Infamy in the Greek Community 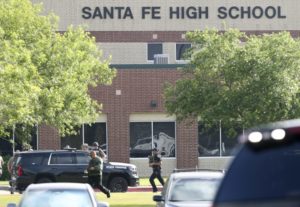 A Greek-American, a 17-year-old child, is the accused killer in the Santa Fe High School shooting, outside of Houston, TX, the fourth-worst on the list of school shootings in the United States.

On Friday morning, May 18, the news agencies and television stations interrupted their regular programming to deliver the grim news that yet another lethal attack against a school was in progress.
The early reports focused generally on the dead and wounded. The entire Herald staff went, naturally, on alert.

So, we started processing the information as it arrived for our web site editions: the number of the dead children was rising constantly; distraught parents rushed to school to pick up their children.
The photos showed scenes now familiar to us from previous school mass shootings: children embracing, mourning, praying, running for their lives. These pictures tend to become almost routine now, since these mass shootings occur so frequently. Also frequent are the promises that something will be done. Until the next attack.

Then, suddenly, a terrible piece of information was released that makes this murderous assault different. They are all terrible, shocking, incredible, but this one was even worse- if it were possible- . Because, as it turned out, the subject in custody for this mass carnage is Greek-American. And so Greek is his name – Dimitrios Pagourtzis – that it leaves no room for doubt. And he is the son of a Greek immigrant.

This is difficult, very difficult, to accept.. The questions are many, rushing like arrows one behind the other. How is it possible that he is Greek-American? How could he grow up in a Greek home and do what he did? What make him take his father’s weapons and commit this terrible crime? And how have his father, mother, and sister reacted? And what do they say to the parents of the children their son murdered?

Last, but not least, what impact does this have on the name of the Greek-American community? Does it not affect us, make us look somewhat bad in the eyes of general society? As if what we’ve been going through is not enough, now this? And how will this affect our image in Greece?

Of course, the act of one member of one family, or a minority or even a nation, cannot condemn an entire people. But does it not leave something of a burden on all of us, a shadow at our expense? Does it not become a matter of discussion?

In the ensuing days we will learn a great deal more about Dimitrios Pagourtzis. We need to. Maybe it will help us understand how a child of our community, our child, could reach such desperation and commit such an unspeakably awful crime.

NEW YORK – The mass school shooting at Santa Fe High School, in the small town of Santa Fe, Texas, last Friday May 18, 2018, has once again brought shock, sorrow and anger to the whole country and the world.

We, the Greek Orthodox Archdiocese of America, mourn the tragic loss of life of the 10 victims of this abominable murderous act, eight high-school students and two teachers and we share the deep pain and grief of their families and friends. Our fervent prayers and thoughts are with all of them, the victims, their families and their friends.

This time, the burden is heavier and the pain is sharper because the alleged seventeen-year old perpetrator of this crime has been identified as a Greek-Orthodox, and his family as members of one of our parishes. We pray for him and his family as well.

This unacceptable and totally unthinkable school massacre is yet another one in a series, it is an epidemic of violent crimes that has overtaken our society and country. It is the result of an explosive mix of the proliferation of the culture of violence, violent video games, bullying and victimization of our youth, desensitization to crime, devaluing of human life and easy access to readily available guns. The question arises and we have posed it last time and we now have to ask again, whether we have done all we can to stop this epidemic disease.

We turn to prayer of course, for Almighty God to intervene and avert any repetition of such heinous acts and events, but as we find ourselves, once again, in need of offering words of comfort and solace, words of solidarity and hope to those who were directly affected by the events in Santa Fe, Texas, we wholeheartedly plead with our elected officials for immediate and effective action.

May we all heal with the assistance of the God of mercy and wisdom and may we work to achieve positive results to restore hope to our society and the world.