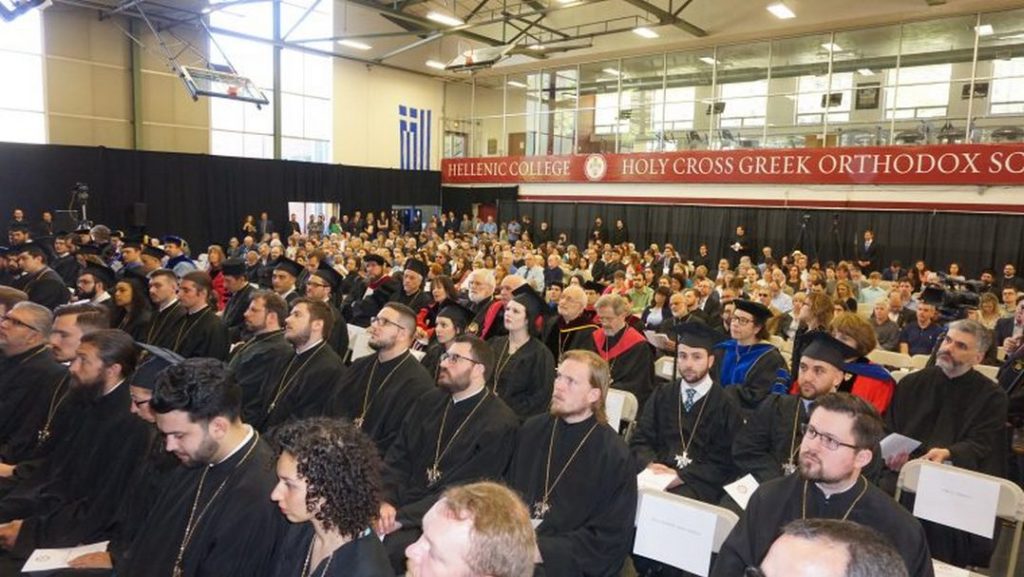 BOSTON – The 77th Commencement of Hellenic College and Holy Cross Greek Orthodox School of Theology began with a paternal message from the newly elected Archbishop Elpidophoros of America on Saturday May 18.

In his message, which was delivered by Bishop Apostolos of Medeia, Chief Secretary of the Eparchial Synod of the Archdiocese, Archbishop Elpidophoros said:

“As you assemble for your 77th Commencement exercises and festivities, I would like to assure you that my prayers and thoughts are with you. Moreover, I would like to convey to you the patriarchal blessing of His All-Holiness our Ecumenical Patriarch Bartholomew. 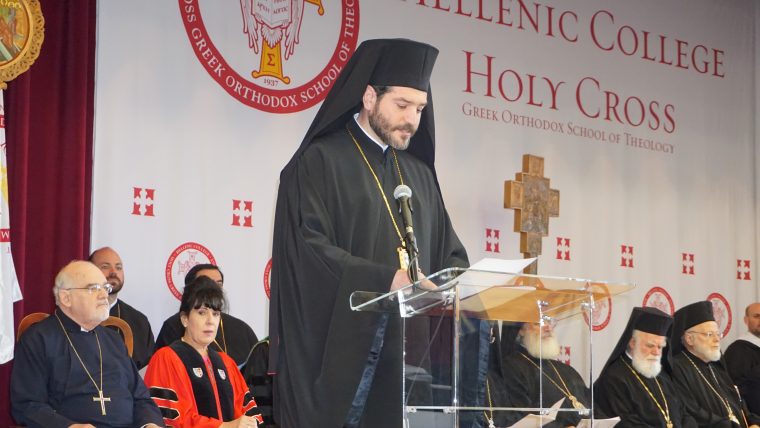 Bishop Apostolos of Medeia, Chief Secretary of the Eparchial Synod of the Archdiocese reads the message of Archbishop Elpidophoros.
TNH/Theodore Kalmoukos

“Over the last eight years, I have lived and served at the historic Theological School of Halki, which is frequently called the “hill of hope.” Having spent some time on your campus, I recognize that graduates and students refer to Hellenic College and Holy Cross as ‘the holy hill’. Therefore, my message to you this morning comes from ‘the hill of hope’ to your own ‘holy hill’ with my sincere love and admiration for the splendid history over the years, as well as for the splendid accomplishments of all those who are graduating today…

“This is precisely the direction that I foresee for our School and Archdiocese in the exciting and formative, albeit challenging and definitive years that lie before us. It should reflect a movement from the sacred altar of the liturgy as well as from the sacred see of our Ecumenical Patriarchate. It should resonate the truth, theology, and tradition of our ancient Church in the educational platforms and pedagogical programs of the modern world. And, finally, it should culminate in a festive celebration of the light and life of Orthodoxy in the beautiful country of America, where it has been planted and established by the Lord’s right hand.”

The highlight of the graduation ceremony was the announcement by Paulette Poulos, Executive Director of Leadership 100, that the organization will donate $10 million dollars for scholarships to students who are studying to become priests in the Greek Orthodox Archidiocese of America. She also handed a check for half-a-million dollars to Metropolitan Methodios of Boston, interim president of the School, for the immediate needs of the School. 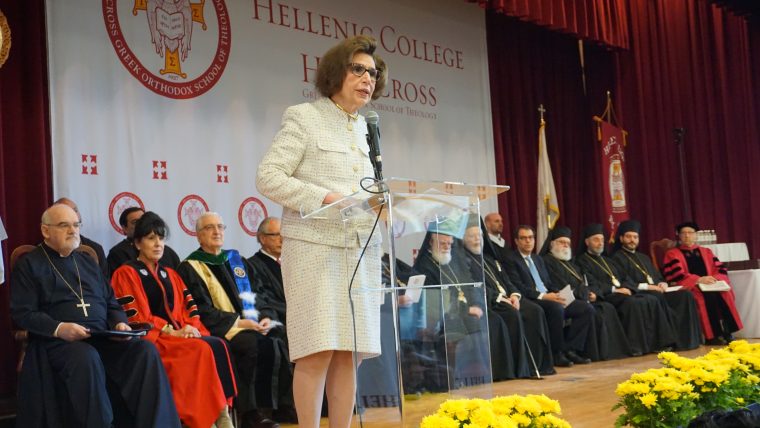 Poulos said in her remarks, “On behalf of our Chairman, Argyris Vassiliou, I am honored to once again be a part of your commencement. Leadership 100 has always been a supporter of Hellenic College/Holy Cross. To date, we have contributed $20 million to the scholarship program for seminarians and we just renewed another $10 million for the next ten years.  We recognize the need to continue providing viable financial support because this is the only Greek Orthodox Theological School we have in America. It is evident that this School is providing the foundation for the training and preparation for these young graduates who will be future leaders in our parishes. This Seminary is unique because we not only provide theological studies, but we value and preserve our Greek heritage and language.”

She also said that she is presenting “on behalf of our Chairman and Board, this check, representing previously approved additional support in the amount of $500,000.”

Hellenic College graduated 25 students; among them was Elias Pappas the Godson of Archbishop Elpidophoros of America, whom he baptized when he was a layman graduate student of Theology.

Present were Metropolitan Methodios of Boston, interim president and also Archiepiscopal Vicar until the enthronement of Archbishop Elpidophoros, Metropolitans Alexios of Atlanta, Gerasimos of San Francisco, Savas of Pittsburgh, Arkalochoriou Andreas from Crete who is also professor at the University of Thessaloniki; he had come in honor of his deacon, Emmanuel Georgantakis. Also present was Bishop Sebastian of Zela, serving as assistant Bishop at the Metropolis of Atlanta. 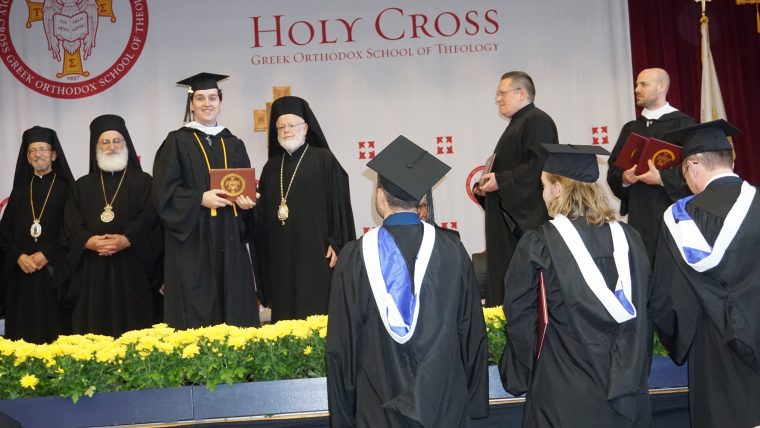 Consul general of Greece Stratos Ethymiou in his greeting said among other things, “Dear graduates, Congratulations to you but also to your parents who supported your efforts. Being a graduate of Hellenic College Holy Cross is a privilege. This institution has been and will remain in the future, with the help of our Church and Diaspora, the spiritual ark of the Archdiocese of America, this very special province of the Ecumenical Patriarchate. You faced many challenges during your studies but you will face more in your life from now on. Consider all these challenges as steps that will make you stronger. Our community needs you, our church needs you, our society needs you, our new Archbishop Elpidoforos needs you. Let’s all join our forces and help him in his task and wish him Axios.”

Hellenic College valedictorian Nicholas George Eliadis in his speech delivered fluently both in Greek and English said among other things, “beloved classmates, it is an honor for me to speak today at our graduation. First off, I would like to thank my parents and grandparents, who raised my sister and me in a home where our faith and traditions were at the center, and all those people in my life who have helped me to reach this milestone…Some of us will continue our studies here at Holy Cross preparing for ordination and to serve our Holy Archdiocese. Others will study elsewhere. Others have already found jobs, and others are figuring it all out. The experiences, however, that we had here at Hellenic College will always connect us together, no matter where we are.”

Eliades continued: “In years to come, wherever we may find ourselves, we must pray for our school and we must support our school. This Sacred School is the future of the Orthodox Church in America. It is important that this school reminds us of our uniqueness, that we are not only American, but that we are also Greek-Orthodox. It is important that we do not lose our traditions, and that we do not lose the Greek language, which is the first language of Christianity. But the most important thing that we must remember is that we must keep the dogmas of our faith and be sure that they are not tampered with, for, according to the Synodikon of Orthodoxy, which is read on the first Sunday of Lent, the Sunday of Orthodoxy: This is the faith of the Apostles, This is the Faith of the Fathers, This is the Faith of the Orthodox, This is the faith which has established the universe.” 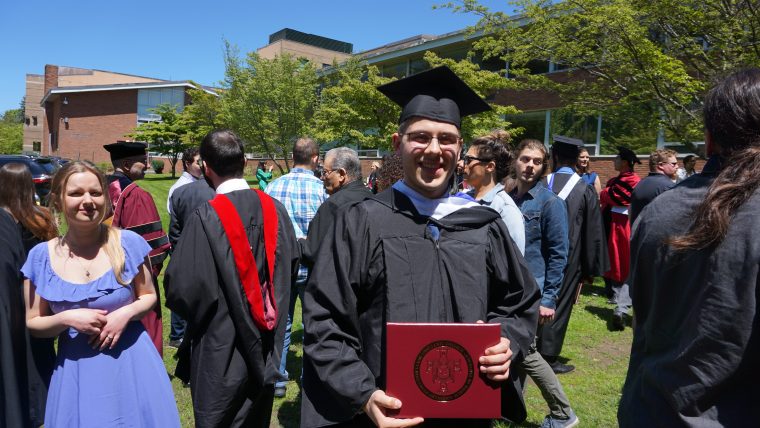 The valedictorian from the School of Theology was John Demetrios Tsikalas, who was the only one who made reference to the former Archbishop Demetrios.

Messages were delivered by George Cantonis on behalf of the Board of Trustees and Jeannie Ranglas, First Vice President of the National Philoptochos of the Archdiocese. The ceremony concluded with a message from interim president Metropolitan Methodios.

The Choir of the School participated under the direction of Fr. Romanos Karanos and an Archieratical Divine Liturgy was celebrated at Holy Cross chapel. At the conclusion of the commencement a luncheon was offered beneath a tent.