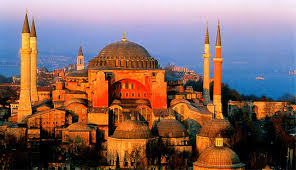 BASILICA OF HAGIA SOPHIA, view from the south, Istanbul, Turkey

Deputies of the state Duma supported the idea to return the Hagia Sophia in Istanbul Turkish Orthodox Church. As reported by RIA «Novosti», said the head of the Duma Committee on property issues,coordinator of the Interfactional parliamentary group for the protection of Christian valuables Sergey Gavrilov. International campaign for the return of the Cathedral of the Patriarchate of Constantinople has been held for several years. The temple currently has the status of a Museum.

The Deputy reminded that on 23 September 2015 in Moscow, was inaugurated the Moscow Cathedral mosque. «The significance of the event said that the opening ceremony was attended by President of Russia Vladimir Putin, President of the Turkish Republic, Recep Erdogan, Palestinian President Mahmoud Abbas and delegations of Muslims from around the world, heads of government and speakers of parliaments of foreign States», — quotes Agency the words of the parliamentarian.

«The Russian side finds it possible to think about living in Turkey, in Istanbul, one of the oldest shrines in all of Christendom — Constantinople Hagia Sophia (Aya Sofya), the ancient Byzantine Cathedral, with a history which involves the history of the Christian Church. We expect the Turkish side’s friendly step — return of Sophia Cathedral of Constantinople of the Christian Church,» — said Gavrilov.

He noted that the Russian side is ready to participate financially, but also to attract to the restoration of the universal Christian monument of the best Russian restorers and scientists. «This step would help Turkey and Islam to demonstrate that goodwill above policy. Christians need to return Hagia Sophia» — said the Deputy of the state Duma.

Hagia Sophia, located in Istanbul, after the capture of the city by the Ottomans in 1453 was converted into a mosque. Only in 1935, Hagia Sophia has acquired the status of a Museum. St. Sophia Cathedral was included in UNESCO world heritage site, among other monuments of the historical centre of Istanbul in 1985.

Campaign for the return of the initial status of Hagia Sophia

In 2006, the number of influential American businessmen and politicians led the movement to return the initial status of Hagia Sophia. Was formed the «Council for the liberation of Hagia Sophia» (Free Agia Sophia Council).

As reported by the then Orthodox portal Сirota.ruabout the beginning of the campaign at a press conference in Manhattan, said the American politician of Greek origin Chris spiru. He is the founder and Chairman of the Board, and is President of the Hellenic-American Union, Athens. Previously, he was Governor of the state of new Hampshire.

Chris spyrou stated that the Council will be implemented at the political, economic and legal levels. He stressed that «this is an international movement initiated in the United States, which has as its objective the transformation of the great Church of Hagia Sophia in Constantinople (Istanbul) in the current Church Orthodox Christian denominations», the way it had been before the conquest by the Turks in the Byzantine capital city.

Answering questions of journalists, he pointed out that «the Turkish government uses and calls the Hagia Sophia Museum, arranges local and international trade exhibitions, concerts and fashion shows,» and stressed that «it is a sacrilege and desecration of Holy places». «We will use all legal and religious methods to achieve our goals,» he added.

Spyros also noted that «in parallel with the actions to be taken in the U.S., the European Union and in organizations for the protection of religious freedoms, began collecting signatures of famous figures and politicians in many countries, so the organization is getting more response.»

«Muslims protested the cartoons of Muhammad. We defend the right of serving in the Church, which is a symbol for all Orthodox,» he said, adding that now is the moment (in the words of Spyros sounded in 2006. — Approx. NEWSru.com), as Turkey seeks to join the European Union.

In the Internet appeared the portal, which was announced the collection of signatures for the return of Sophia to the Orthodox believers and placed the appeal to the members of the European Union with the request to affect the Turkish authorities, in order to stop the sacrilege.

Currently the campaign organisers are exploring the possibility of going to American and European courts to claim the rights again to conduct the services in St. Sophia as the place is revered by Orthodox Christians.

At the public hearing of the Committee on human rights of Congress (Congressional Human Rights Caucus) held on 20 June 2007 under the chairmanship of the head of foreign policy Committee of the U.S. Congress Tom Lantos, President of the Democratic party of the state of new Hampshire Raymond Buckley, speaking about the current social status of the temple, in particular, said: «it is Unacceptable to deprive people of the right to pray in their Mother Church is Unacceptable to tolerate the daily abuse of this sacred space, used for trade fairs and concerts. It is unacceptable to allow further such open disrespect for Orthodox Christianity, and all Christianity».

And Chris Speer in an interview he gave in 2009 to the Russian newspaper «Tomorrow», said: «We aim to Hagia Sophia the Wisdom of God again to reclaim their rightful place as a temple, sacred to all Christianity, as the mother of all churches, as the Royal temple of Orthodoxy than he was before capture by the Ottoman Turks in 1453. The fact that Saint Sophia has never been a mosque and was never a Museum. She was always a Christian Church, converted into the mosque of Sultan the conqueror, and then to the Museum. I would return this temple to its original purpose» (cited fromWikipedia).

Sophia of Constantinople and Sofia Trapesund

Temples of Saint Sophia in Turkey has a complicated history. The problems affected not only Constantinople (Istanbul) Church, but the Church in Trabzon, which began to perform the prayers.

In January 2013 the Turkish Parliament (Grand national Assembly) began to study the question about the possibility of turning the Hagia Sophia in Istanbul (Constantinople) into a functioning mosque. The news of the inclusion of this issue in the agenda in response to the Parliament a statement then appeared to many observers as a complete surprise.

The request with the requirement to provide an opportunity for the celebration of worship by Muslims in the Hagia Sophia was sent to the national Assembly on behalf of Turkish citizen Tulipa Escort from the city of Kahramanmaras (southeastern Turkey).

Later the Primate of the Orthodox Church of Constantinople Patriarch Bartholomew in an interview with the Turkish newspaper Milliyet for the first time publicly spoke about the intentions of the authorities of Turkey to turn Hagia Sophia in Istanbul into a functioning mosque.

«We want the status quo (the status of the Hagia Sophia in Istanbul. — Approx.ed.) remained unchanged. Turned it into a Museum — albeit a Museum remains,» quoted the portal«Православие.by» the words of the Ecumenical Patriarch.

«I attended located in Trabzon (Trabzon, Turkey) monastery of Panagia Sumela, where he celebrated the divine Liturgy and visited the Hagia Sophia. I then answered the question of journalists about the conversion of this temple into a functioning mosque, saying that it would be better if the temple remained a Museum, because in that case it will be accessible to all», — said the head of the Church of Constantinople.

Commission of the Turkish Parliament, which accepted the request, will take into account the opinions of various organizations and institutions.

Greek Agency Amen in those days reported from Istanbul that located there are famous in the history of Orthodoxy Studite monastery will be transferred from the supervision of the Turkish Ministry of culture in the subordination of the General administration of the waqfs (religious property) and will be transformed from a branch of the Museum «Hagia Sophia» into a functioning mosque.

As for the Hagia Sophia in Trabzon, the General Director of foundations of Turkey (General Directorate of Foundations) Adnan Ertem, then said that «there is no bar» to the temple «started acting as a mosque, and what will happen in the coming days.» This happened in July 2013.

As stated by the Director of the Department of charities Mazhar of Yildirimhan, which is the Hagia Sophia Museum, in addition to hours Muslim prayers, performed five times a day, the temple will continue to operate as a Museum.

At prayer time paintings and mosaics of the Hagia Sophia Museum is closed carpets and curtains, «which are not nailed up and not cause any damage,» said the official about the fate of unique images of the temple.

The tiny Christian community of Trabzon tried in vain to save the temple, the last 52 years served as a Museum.

«It is known that the Muslim community in Trabzon has no need for another mosque. The Orthodox parish here. The only way to save the Church is to leave it function as a Museum,» lamented then the employee of the press service of the Patriarchate of Constantinople Dositheus Anagnostopoulos.

Turkey is experiencing a period of reislamization, and the conversion of Orthodox churches into mosques is one of the evidence, commented on the events in Trabzon, the famous American specialist on the Middle East and Islam by Raymond Ibrahim. He expressed in those days the assumption that the next stage will be the Hagia Sophia of Constantinople.

As for the Hagia Sophia in Trabzon, it is a monument of Byzantine architecture. There are unique frescos and mosaics. The Church was built in 1238-1263, Manuel I Komnenos. In 1461 Mehmed II conquered Trabzon and converted the Church into a mosque. In 1964, after restoration conducted in 1958-1964, with the help of the University of Edinburgh, the Cathedral was converted into a Museum.