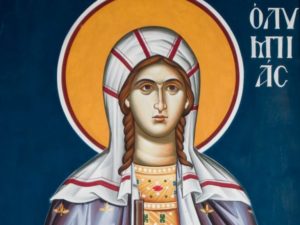 The St. Phoebe Center for the Deaconess advocates for the reinstitution of the ordained order of deaconesses for the benefit of the Orthodox Church today. We also appreciate that this is a significant issue that prompts a range of opinions, and we consider it to be part of our work to promote empirically grounded conversation.[1]

Unfortunately, distortions and misrepresentations of the historical record, as well as fallacies about the interest in renewing the female diaconate, have been propagated by some of those opposed to deaconesses. Furthermore, when making their case, some detractors misunderstand and misrepresent the ecclesiology, history, and theology of the Church.

Correction of these errors is necessary for honest dialogue. By no means exhaustive, this article by the St. Phoebe Center Board provides solid historical and theological information about the diaconate by theme. We undertake this project with humility, knowing that while we offer up our own efforts, the Holy Spirit is also at work.

As the Church developed, women took on many roles in antiquity, including that of deaconess. In the Byzantine tradition, there is ample evidence that they were ordained to the major clergy—as was the case in the capital of the empire, Constantinople. The ordination rite for deaconesses is included in the earliest extant Euchologion (prayerbook) of the Church, the Barberini Codex Gr. 336 from the eighth century. A deaconess was ordained by the bishop, during the Liturgy, at the altar, she was presented with a stole and chalice, and received communion with the clergy. Her service was tied to the Eucharist as the source and summit of her ministry.

It is sometimes asserted that deaconesses exclusively helped with adult female baptism. This is simply not the case; deaconesses ministered to women much as male deacons ministered to men. Other responsibilities mentioned in Church texts include: catechetical instruction, pastoral care, taking communion to the infirm, supervision at liturgy, participating in processions, and serving as agents of the bishop entrusted with carrying out philanthropic and hospitality tasks.[2] Not every deaconess performed each of these roles; their roles varied according to local need. We believe that much of this ministry is still needed today.

Detractors point out that deaconesses were never at one given moment universally present throughout the Church; their presence varied over time and place. This is true, but it is not an argument against deaconesses—instead, it is indicative of a principle of Orthodoxy that holds today: the local Church is able to minister to the particular needs of its community, as was seen in the 2017 consecration of deaconesses by the Synod of Alexandria to help with catechesis, services, and mission work.

If the universal Church did not see fit to prohibit a tradition on the ecumenical level, and, in fact, supported it at that level (as the Church did in its tacit approval of deaconess in the proceedings from two Ecumenical Councils), then, the local Church may make use of it, and this is true of the female diaconate.[3]

Why then, was there a decline of the female diaconate, which notably paralleled the decline of the male diaconate?  The reasons were complex, and included monastic influence on parish liturgical services, geopolitical pressures on the Byzantine empire, and, for women, the introduction into the Church of ideas of impurity connected with the female body.

Some detractors have recently suggested that the Church stopped ordaining women because it “came to its senses” and recognized that women should never be in authority over men. There is no evidence for this claim. Although there is not room here for a full treatment of authority with regard to men and women, we must clarify a critical point about the diaconate and authority: while all ordained orders bear the authority of the Church by their very nature, the work of the diaconate is service, and its characterization as one wherein one group exercises authority over another misconstrues and subverts this truth.

Furthermore, the Orthodox Church has never embraced the very modern notion that all change is progress, and, instead, has seen the value of restoring practices from the past when they are deemed helpful today. For example, frequent communion of the laity—seen as a good and beneficial practice nearly universally today—fell out of favor in the middle of the Church’s first millennium and was only revived in the past century. This revival was not prevented by the erroneous notion that frequent communion, while part of the history of the Church, did not belong to its tradition because it had not been linearly “handed down to us.”

Most references to deaconesses in canons from the Orthodox Church include regulations of their duties, their requirements, or the consequences if they betray the confidence of the Church, and these canons therefore stand as evidence of when and where deaconesses were present. Detractors point to canons that appear to ban or dismiss the idea of ordained deaconesses (such as those from Nîmes in 396; Orange in 441[5]; Epaone in 517; Orleans in 533), but these local western councils are not part of the canonical tradition of the Orthodox Church, as asserted at the Quinisext Council, a Council that is recognized by the Orthodox Church as having ecumenical import.

Canons do point to restrictions around the requirements for deaconesses; such as their marital status (usually unmarried or widowed) and age (60 years in some, 40 in others), but there are more exceptions to these canons than there are canons: for example, Saint Epiphanius of Salamis of the 4th c writes that, “Deaconesses must be married to only one man.”[4] In a reinstitution of the female diaconate today, the requirements for deaconesses would need to be considered based on local circumstances and need.

The question of reinstituting deaconesses is a matter of praxis; it is not a dogmatic issue, as some would assert, and this gets to the heart of how we understand the Church. Within the Orthodox Church, “dogma” is understood to be the truth of the Church that is of salvific importance, expressed in the Gospels, and articulated in Ecumenical councils. There are very few items that fall into this category, including: the Creed, the teaching about the Trinity, the understanding of the Incarnation, and the defense of icons. Orthodox dogma includes neither dogmatic teaching on deaconesses, nor dogmatic teaching on the meaning of man and woman that would preclude deaconesses. The reinstitution of deaconesses is about the practice of the Church, and is within the purview of each of the autocephalous, local churches.

“Change” in the Church

As the world around us changes at an alarming rate in terms of everything from technological advances to social mores, it is good for the Church to be circumspect about the influence of these changes. Fortunately, the Church has no record of rash response to pressures from the world. Those anxious about precipitous changes have either lost sight of, or never fully understood, all the safeguards that are organically in place in the Orthodox Church that prevent hasty change of any sort, as well as the very different and sturdy ecclesiology of the Orthodox Church that lacks the same weaknesses or fracture points as other communities.

The reinstitution of the female diaconate has been under consideration by bishops, theologians, and laity for some time across the Orthodox world—from late 19th century Russia, to 1980s Greece, to contemporary Africa. In the words of eminent theologian Metropolitan Kallistos Ware, “We should try to go ahead with the revival of the order of deaconess. That has been discussed for many years. Some people were already discussing it at the beginning of [the 20th]century in the Orthodox world. Nothing has yet been done. The order of deaconess was never abolished, it merely fell into disuse. Should we not revive it?”[5] We at the St. Phoebe Center for the Deaconess believe that a renewed female diaconate will help meet the many ministerial needs of the Church today and build up the Body of Christ by enabling women to provide their service—their diakonia—with the protection, oversight, and sacramental blessing of the Church, and will do our part by promoting empirically grounded and respectful conversation on the matter.

[1] This dedication to conversation with those who see the issue differently was exemplified by our presentation of positions for and against the female diaconate at our 2017 conference, Renewing the Male and Female Diaconate in the Orthodox Church.