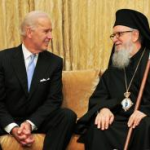 Archbishop Demetrios and Vice President Biden had a lengthy discussion at the Archdiocese last week, as we reported.

Oddly enough, they didn’t go in front of the TV cameras to make a statement, as is customary.

The main topic of discussion revolved around issues dealing with the Ecumenical Patriarchate and Greek Orthodoxy. That’s all well and good.

The Greek-American community has a duty to do whatever possible to make sure that the Patriarchate is able to exist and operate freely and safely.

However, that is not enough. The community’s interests clearly extend beyond the Patriarchate, especially nowadays.

Today, the Greek people are being rocked by a deep financial and social crisis. It is a crisis that could even threaten the nation’s very existence if left unchecked. Therefore, it would have been advisable to take advantage of this ceremonial visit by Vice President Biden to the Archdiocese – the previous day members of the community hosted two fundraisers for the Obama-Biden team – and turn it into the long sought-after opportunity to revisit the issue of aiding Greece with its financial problems.

This meeting could have served as the catalyst for the announcement of some sort of program of direct or indirect support to the struggling Greek people, i.e. more lax immigration policies for Greeks wishing to relocate to the U.S. for the next two years. And they could have made this announcement directly to the media through a press conference.

Instead, the results of this meeting proved once again that the religious nature of the Archbishop’s role is not suited for representing the Greek-American community before civic and political leaders.

Nevertheless, those responsible for making the meeting happen deserve to be congratulated.