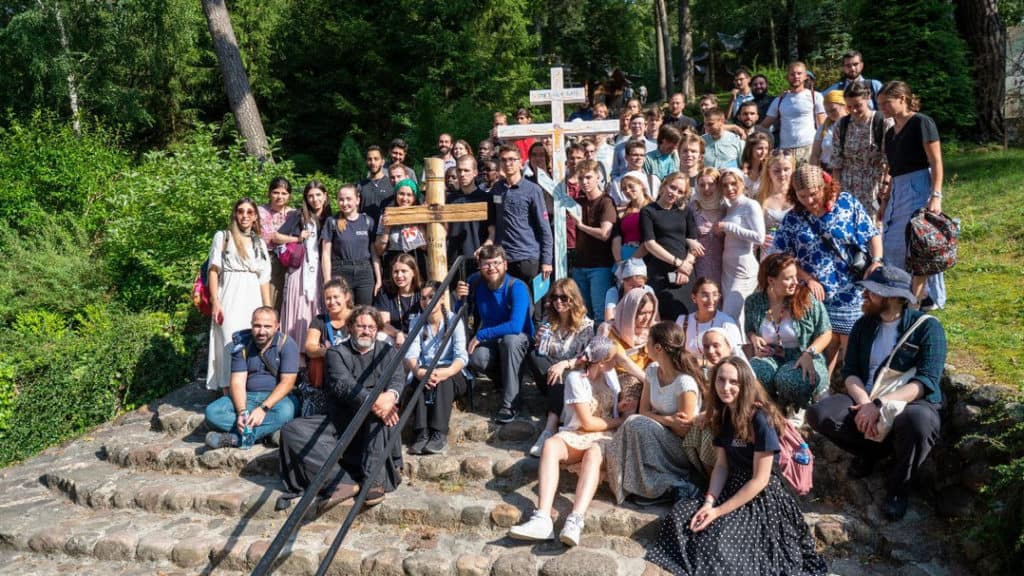 Youth and youth workers at “Suprasl 2022″

Suprasl, Poland – Over 90 youth and youth workers from 22 countries participated in “Suprasl 2022: A World Gathering of Orthodox Youth,” an international gathering held at the Orthodox Academy at the Annunciation Monastery here, 18-24 July 2022. Attendees explored the theme “Go and Bear Fruit,” based on John 15:16, learning how as young people, they have a vital role in creating opportunities for unity within the global Orthodox Church.

“It was inspiring to hear participants share their wishes and dreams for the growth of more pan-Orthodox youth cooperation,” said Archdeacon Joseph Matusiak of the Polish Orthodox Church. “Suprasl 2022 was an event where the unity of Orthodoxy  was experienced and lived, fostered and developed.”

Suprasl 2022 was organized with the blessing and support of His Beatitude Metropolitan Sawa of Warsaw and All Poland. Other Orthodox primates and hierarchs of several Local Orthodox Churches encouraged and sponsored young people from their Churches to attend the event. 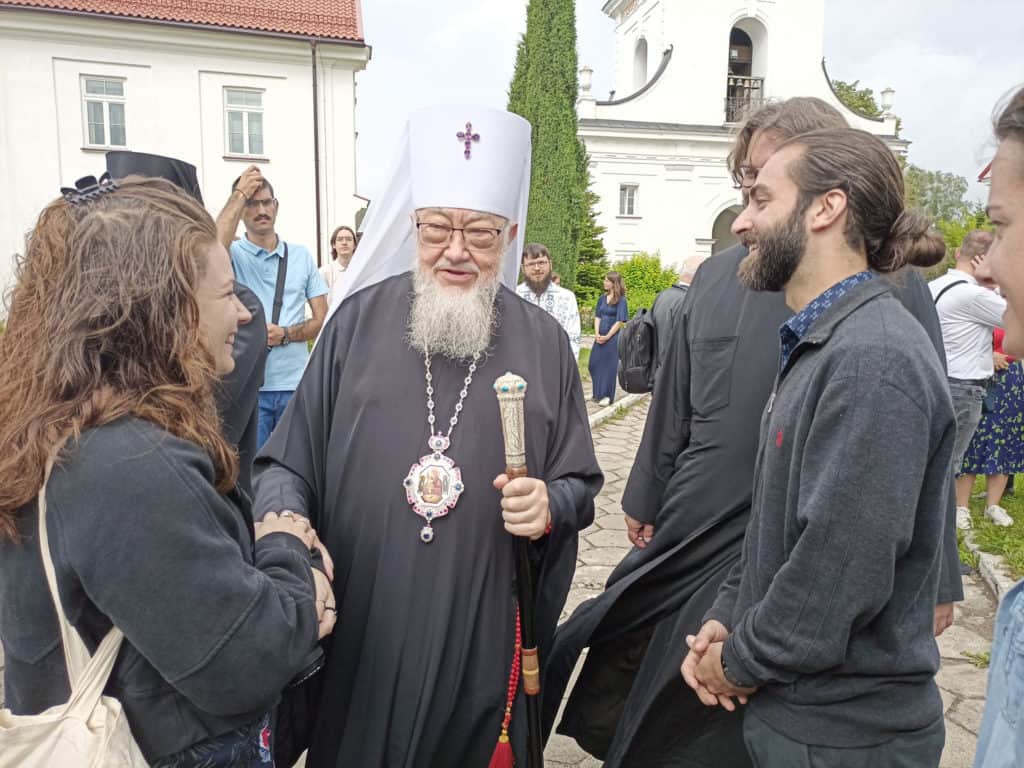 His Beatitude Metropolitan Sawa of Warsaw and All Poland

At the opening of the gathering, Metropolitan Sawa greeted participants, expressing his gratitude to them for taking a step to renew and revive pan-Orthodox international youth gatherings. “Do whatever you can to build up and spread the unity of the Orthodox Church through your work here this week, because the work of the devil is very strong and active these days.”

In bringing Orthodox young people together from around the world, Surprasl 2022 drew upon the legacy of Syndesmos, an organization founded in 1953 to encourage connections among Orthodox youth throughout the world. However, Suprasl 2022 was neither an administrative meeting nor an assembly. It was an opportunity for young people from around the world who had never met before, to taste and celebrate the unity found within the Orthodox Faith regardless of nation or culture, focusing on how that unity can be an inspiration for youth work.

“When I signed up for Suprasl I wasn’t sure what to expect. It was a privilege and a blessing to meet Orthodox youth from so many different cultures and backgrounds. After this event I am convinced of the importance of Churches meeting each other and keeping up conversation,” said Elias Van Outrive from Belgium.

“We purposefully chose the theme of ’Go and Bear Fruit’ because it allowed us to provide lectures and workshops on a variety of topics for participants,” Archdeacon Joseph explained. “The presentations encouraged dialogue and the sharing of ideas for others to bring home as insights and tools for their work in the field with youth in their churches.”

Presentations included an official opening by Archpriest Vasileios Thermos, Associate Professor of Pastoral Care at the Higher Ecclesiastical Academy of Athens, a theologian and youth psychiatrist who delivered a lecture entitled, “Youth in the 21st Century: Challenges for an Orthodox Conscience.” Father Vasileios identified the many challenges Orthodox youth face in the contemporary world, and how faced with the postmodern context, Orthodox youth can orient themselves on Christ to rise above the surrounding confusion.

Other featured presentations were offered by missionaries Steve and Theophani Sargianis of OCMC (Orthodox Christian Mission Center) and Nicholas Sooy of OPF (Orthodox Peace Fellowship). Presentations focused on practical youth-related topics including organizing pan-Orthodox youth camps, activities to address the accelerating climate crisis, and the understanding of creativity and the need to actively respond to God’s call to create. 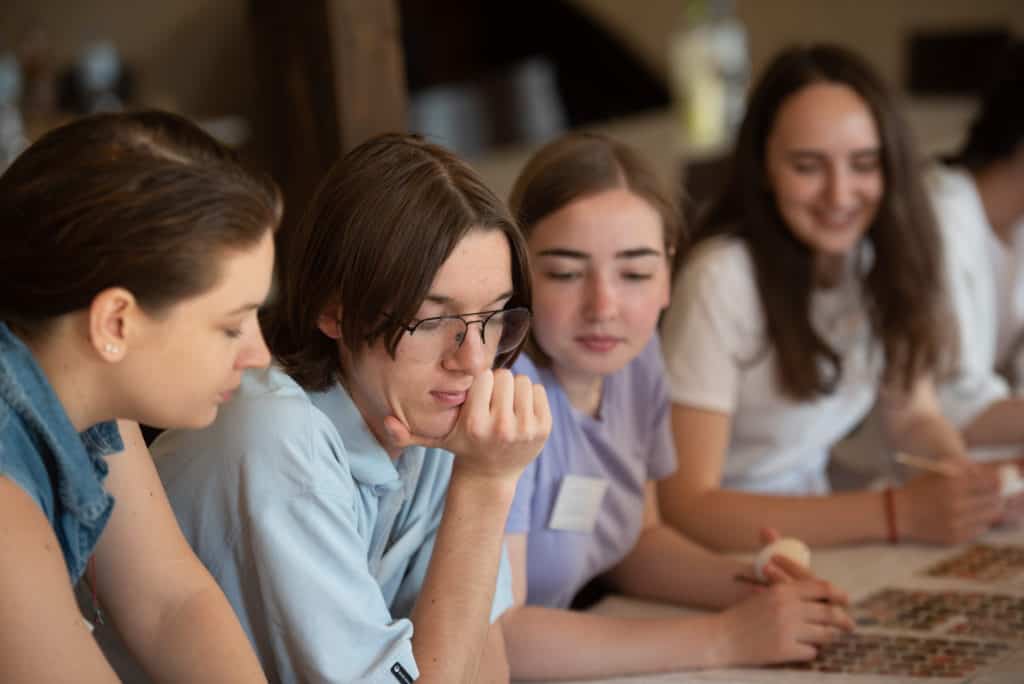 Participants during one of many sessions

“Participants explored how we can engage with the question of creativity, not as an aesthetic quality alone but as something that has profound implications for our humanity and our faith in Christ,” said Aleksander Wasyluk, Director of Youth Ministry for the Church of Poland and a member of the Suprasl 2022 organizing committee. “The growth of Christ’s Church is dependent upon our response to the Great Commission, and to respond we need to be creative in our work.” 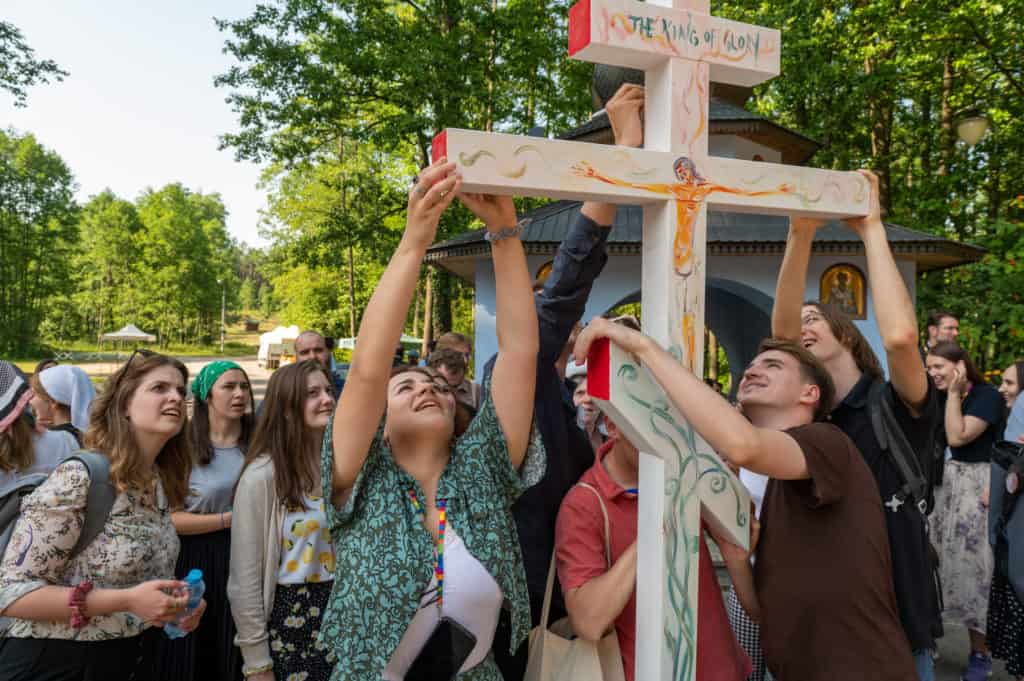 Other highlights of the week-long event included a pilgrimage to the Monastery of Ss Mary and Martha on the Holy Mountain of Grabarka, where participants planted a two-meter tall cross among the famous forest of crosses. Earlier in the week, resident artist and workshop leader Dr Davor Dzalto painted the cross on which all the participants signed their name. The cross will stand in remembrance of Suprasl 2022 and as an inspiration to all who see it. 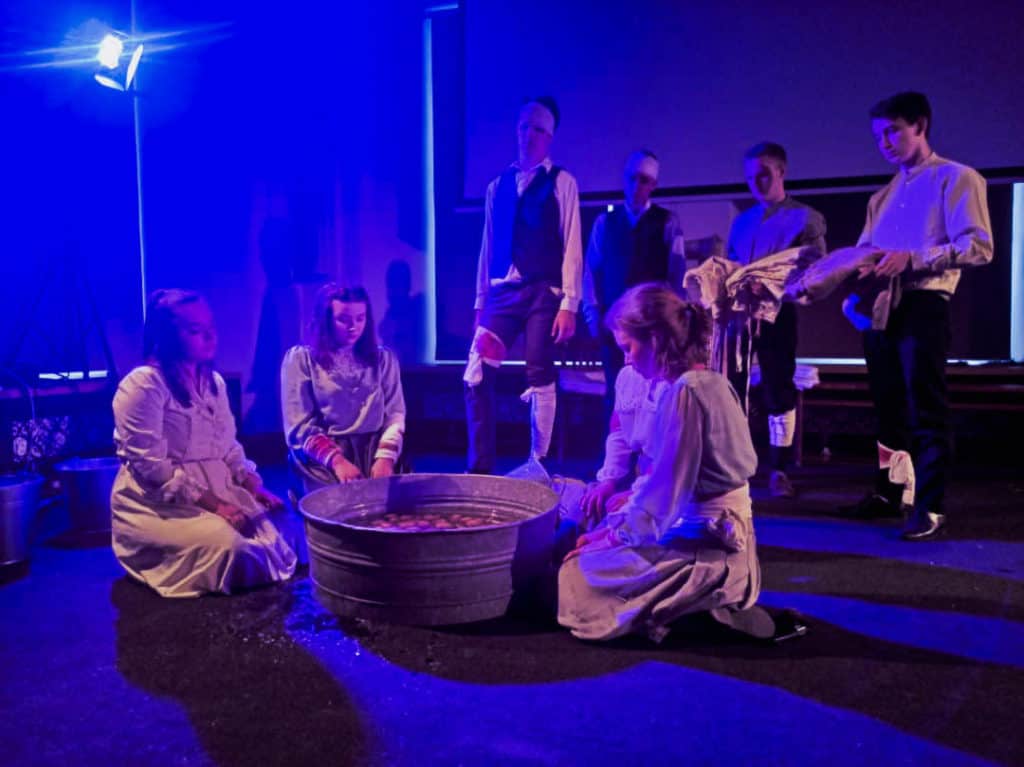 Performance of “No One is a Number,” an original play based on the life of St. Maria by Fr. Sergey Hackel

On Wednesday the participants celebrated the feast of St. Maria of Paris (new style). Dn Mark Roosien, lecturer in liturgical arts at Yale University, presented a paper on the life of St. Maria and the work of Orthodox Action, the organisation founded by St. Maria and a group of Orthodox individuals in Paris in the 1940’s. Later that evening, the participants viewed a performance of “No One is a Number,” an original play based on the life of St. Maria by Fr. Sergey Hackel. The play, created by Ms Joanna Troc of Bielsk Podlaski, Poland, provides a glimpse into the life and hardships encountered by Russians who were forced to immigrate to France during the time of the Russian Revolution, and their creative response to those hardships, led by St. Maria and others.. The play was very poignant, considering the current Ukrainian and recent Syrian refugee crises.

Participants also took to the road to experience the richness of Orthodoxy in Poland, visiting the Monastery of the Nativity of the Mother of God in Zwerki, Poland, venerating the relics of the Child Martyr, St. Gabriel of Zabludow, the 16th-century church of the Nativity of the Theotokos, in Bielsk Podlaski, and the Monasteries of the Great Martyr Catherine and St. Demetrios of Thessaloniki in Zaleszany and Saki respectively. While at the monastery in Saki, a trisagion service was sung by participants for a Syrian refugee who was found on the Belarussian/Polish border in the late winter of this year.

The excursion concluded with a visit to the village of Bialoweiza and the training center of the Orthodox Youth in Poland. The Polish Orthodox Church’s commitment to youth is well-established, giving attendees a glimpse of what is possible in their own Churches.

Central to the theme of the gathering, liturgical services were celebrated throughout the week, including a midnight Liturgy in the main cathedral of the Suprasl Monastery. Reflecting the diversity of participants, the Liturgy was sung in multiple languages, reminding them that it provides the unity expressed in the diversity of cultures. Listen to an audio recording of the Divine Liturgy here.

Suprasl 2022 also provided participants with multiple opportunities to meet with hierarchs of the Polish Orthodox Church, including His Eminence Archbishop Jacob of Bialystok and Gdansk, who hosted a breakfast, getting to know the participants and sharing the history and life of his diocese. His Eminence Archbishop George of Wroclaw and Szczecin also hosted a question and answer session which explored a wide range of topics in a lively session that lasted nearly three hours. 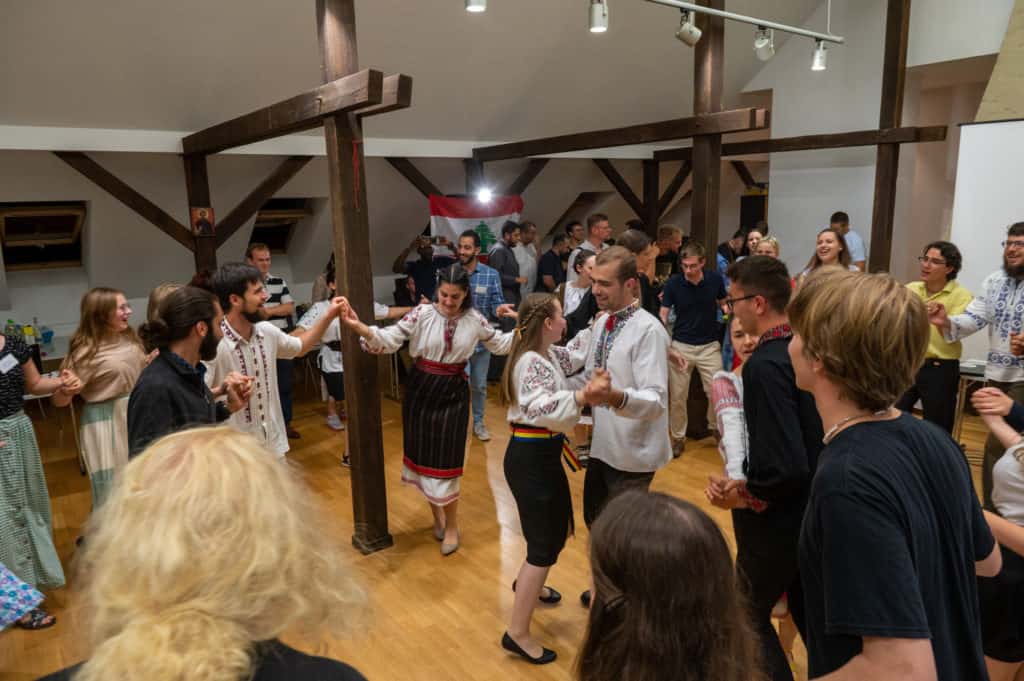 Participants at a traditional cultural evening with no shortage of stories, histories, song, dance, and delicacies from distant and nearby lands

The gathering also afforded participants with a traditional cultural evening with no shortage of stories, histories, song, dance, and delicacies from distant and nearby lands.

“At the closing session, participants discussed their dreams for more pan-Orthodox youth cooperation,” Archdeacon Joseph noted, adding, “Our team is exploring how best to plan for future events, both international and regional, as ways to encourage networking and greater collaboration to create sustained forms and models of pan-Orthodox youth cooperation in the future.”

Suprasl 2022 was made possible in-part by generous donations from the Orthodox Vision Foundation, St. Paul’s Foundation, the Wojewodship of Podlasie, and many individual donors. Organizers are grateful for these gifts, bringing this important project to fruition.